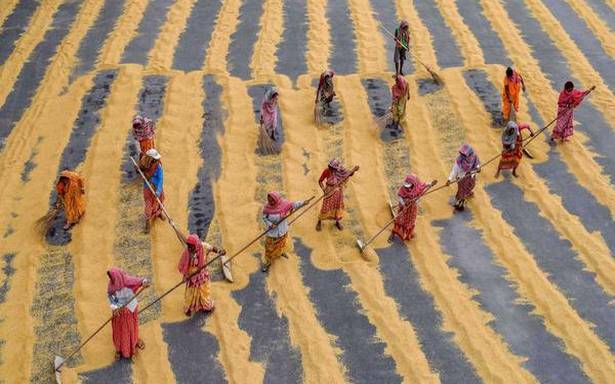 As the movement against the agricultural reform laws builds towards its one year anniversary, it is clear that the bulk of farmers in eastern Indian States have not been as motivated to join the agitation as their counterparts in the northwest, as they have not even experienced many of the benefits that the laws threaten to take away.

In fact, farmers in these States, with densely populated rural areas, bear the double burden of low procurement as well as low prices in the open market, partly because grains procured in the northern and western States are dumped into the eastern region at subsidised rates via the public distribution system (PDS), a situation exacerbated by additional free grain distribution as COVID-19 relief.

Experts and farm leaders say reforms are needed in both procurement as well as PDS, to allow for more effective decentralised procurement, which will benefit both farmers and consumers in the region.

Analysis of procurement and PDS data from 2020-21 highlights the stark divide. Government procurement of wheat and paddy in Bihar and West Bengal each account for just 2% of the national total, despite the fact that the latter is the country’s largest rice producer. However, 10% of all food grains allocated under the National Food Security Act last year went to Bihar, while 7% went to West Bengal. Uttar Pradesh and Tamil Nadu are other major States in a similar situation.

On the other end of the spectrum, Punjab accounts for a whopping 27% of all procurement, and Haryana for 11%, while only being allocated 2% and 1% of grains under PDS respectively. Madhya Pradesh, which has seen a major increase in buying by the government over the last few years, now accounts for 16% of national procurement, and only 6% of PDS allocations. States like Chhattisgarh and Odisha have a greater balance between their share of procurement and the grain allotted for PDS beneficiaries.

This reality is one of the key reasons why the scale of the movement against the farm laws, which protesting unions say will ultimately destroy the system of government procurement at remunerative rates, is so much smaller in the eastern States.

“In Punjab and Haryana, farmers are protesting because they are experiencing the benefits of the MSP procurement system and are fighting so that it is not snatched away from them. But in other States, those who have joined the movement are fighting to get the benefits in the first place. So definitely, we cannot expect the same scale,” said Hannan Mollah, general secretary of the All India Kisan Sabha, pointing out that although the MSP for paddy is set at ₹1,868 per quintal last year, most Bihar farmers were forced to sell at ₹1,500 per quintal.

It’s a no green signal from the farm world

“As long as the government is procuring at MSP rates in one place and then distributing the grains at subsidised PDS rates in another place, the prices will definitely be depressed in the second location,” said Himanshu, an economist at the Jawaharlal Nehru University’s Centre for Economic Studies and Planning. However, he felt that the lack of avenues for sale in eastern States was a bigger obstacle.

“There is a shortage of the necessary warehouses and godowns needed to store procured grain. When Bihar dismantled the APMC mandi system in 2006, they failed to create any formal substitute for the marketing system,” said Mr. Hussain who is also a former CMD of the Food Corporation of India. “BISCOMAUN [Bihar’s State Cooperative Marketing Unit] is in a very bad shape financially, so farmers don’t get paid on time. Apart from fiscal and physical infrastructure, the manpower needed is also not there,” he added.

Dr. Himanshu pointed out that Chhattisgarh and Madhya Pradesh provided positive models of what needs to be done.

“They have reformed their PDS system and revitalised decentralised procurement,” he said, adding that there have been hurdles with getting the Centre to reimburse increased procurement due to bonuses offered by the States.

“When grain is procured locally, it helps the local farming community get fair prices, it cuts costs of storage and transport for the government, and it provides PDS beneficiaries with the kind of local variety of food grains they are most used to. This is the ideal,” he added.