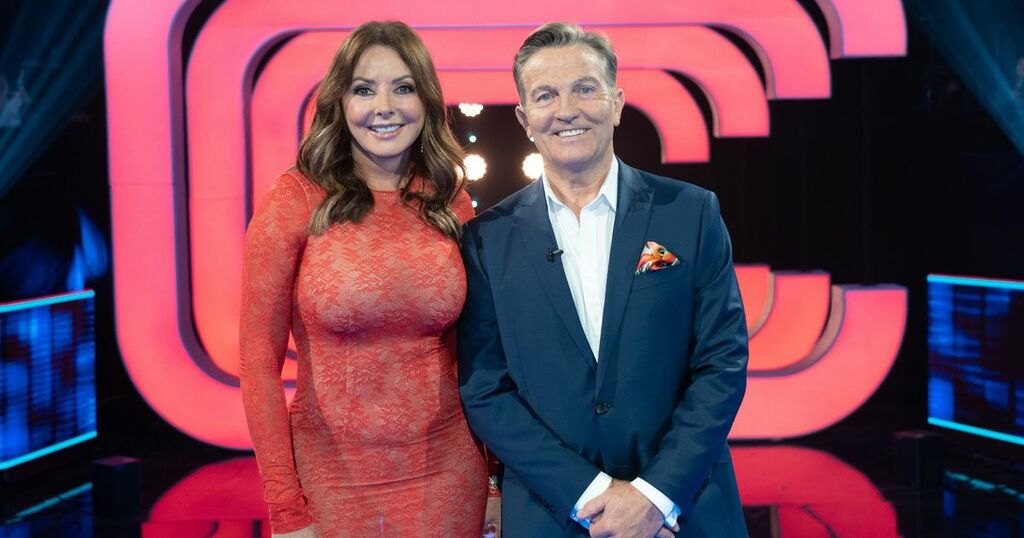 Carol Vorderman looked stunning in a glamourous red gown on Beat The Chasers.

The former Countdown star is set to appear in this week's ITV show and a sneak peek showed her looking as gorgeous as ever.

The 61-year-old could be seen smiling from ear to ear as she stood next to host Bradley Walsh while taking on the Chasers.

The star opted for an almost floor-length dress that she paired with nude strappy heels and a sparkling gold bangle.

She finished off her look with her brunette hair styled into a bouncy blow dry with her usual full glam makeup finished with a nude glossy lip.

Host Bradley looked dapper as he dressed in a smart navy blue suit along with a crisp white shirt and colourful pocket square.

Carol is one of a number of celeb contestants that are taking part in the celebrity special of the programme which started Monday and will continue tonight.

Other familiar faces who are taking on the chasers include Joel Dommett, Adrian Chiles, Samia Longchambon and Simon Weston.

The game show begins by the celeb answering multiple choice questions to build up their cash to go against the Chasers.

They then need to decide how many Chasers they want to go against in the final round as more Chasers means more money at stake.

The celebs choose a charity to donate their money to which they share at the start of the programme.

Anne Hegarty, Jenny Ryan, Paul Sinha, Shaun Wallace, Darragh Ennis and Mark Labbett are amongst the Chasers who try to make sure the contestants don't walk away with any money.

The TV appearance comes just a few days after posing for a snap for her Instagram page which left little to the imagination.

The star often posts photos to her social media which show off her stunning figure.

She shared a black and white selfie to mark the end of 2021 where she thanked her followers for their company during the pandemic.

"HAPPY NEW YEAR GANG. Thanks for the company in covid times...."

However, it seems she has the comments turned off on her Instagram page so followers weren't able to leave messages themselves.

She then went on to post a stunning snap of the view of the sea where she lives with two paddle boards in view.

Carol explained that she spent her New Year's Eve with friends paddle boarding which was followed by 'fresh bacon and egg butties cooked on a beach'.

The TV personality said her 2021 was full of 'magical moments' which she spent with her old friends as well as making plenty of new ones.