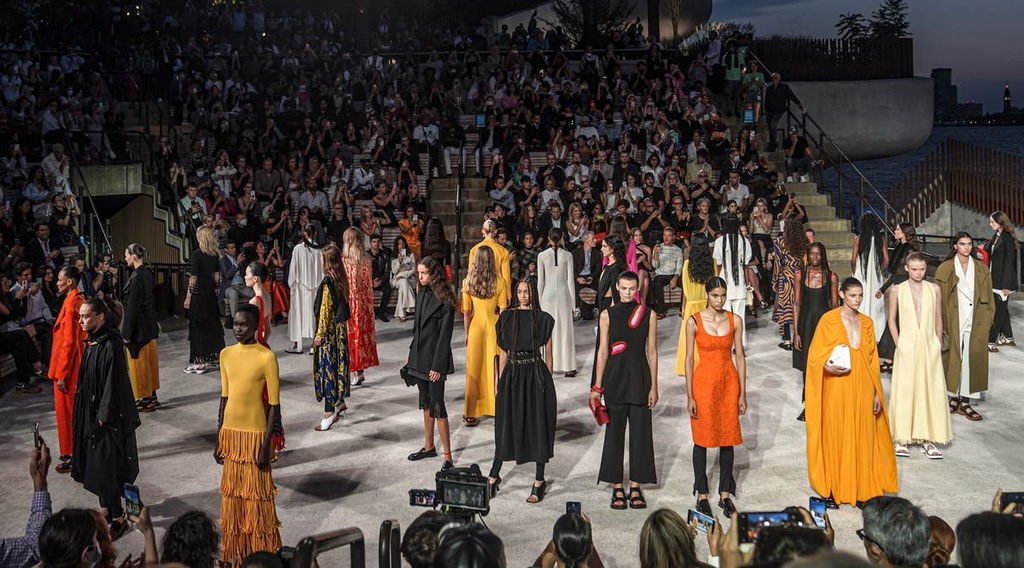 Sailboats wafted by on the Hudson River and the setting sun sparkled on the water as Proenza Schouler celebrated a return to in-person fashion shows against the spectacular setting of New York’s buzziest waterfront locale, Little Island.

Designers Lazaro Hernandez and Jack McCollough were so delighted with Wednesday's show, held in perfect late summer weather, that they shared a high-five and a kiss as they ran out for their bow in the new park’s amphitheater facing the water — surely one of the city’s premier views.

The show, which featured an appearance by vice presidential stepdaughter Ella Emhoff — who also appeared in the label's digital February show — was timed precisely to the sunset at 7:15 p.m. That gave the designers a dramatic darkening sky as they presented a collection meant to celebrate a return not only to city life but to the ideas of travel and adventure.

“We wanted to capture this newfound freedom that we have, still slightly fragile at times,” McCollough said in a backstage interview after the show.

Hernandez noted that the two designers had developed the idea during their own travels, which began in April after nearly a year in lockdown. They visited islands both in Hawaii and in the Mediterranean, he said.

“This is life, this is living, this is what we all want to be doing,” he said of the show's ethos. “Just that idea of expedition and travel and exploration. That's what we do as humans — we want to learn more."

The clothes were a mix of utilitarian black and bold yellow, red and orange. The brilliant colors, the designers said, were meant to suggest “a psychological tonic to recent times,” as well as a metaphorical turning of the page to a new chapter. Three colorful dresses in particular, in gauze jersey, pointed to “a life that is free to step out once again,” the duo wrote in their show notes.

Fringe on a number of garments was “a celebration of the handmade,' they said. As for shoes, they were often flat and comfortable, recognizing ”the reality of comfort being paramount today."

Emhoff, stepdaughter of Vice President Kamala Harris wore a poncho-like black coat, her hair pulled tightly back in a single braid. The model-designer, who graduated as an art major from the Parsons School of Design in May, also appeared in the label’s February collection, presented as a digital film.

The 2.4 acre Little Island park, which sits atop a series of columns shaped like tulips, opened in May, a jewel within the larger Hudson River Park. McCollough noted that with each Fashion Week, it had gotten “harder and harder to find new venues that have never been used before.”