After verdict on Maria Ressa, world puts Duterte on trial 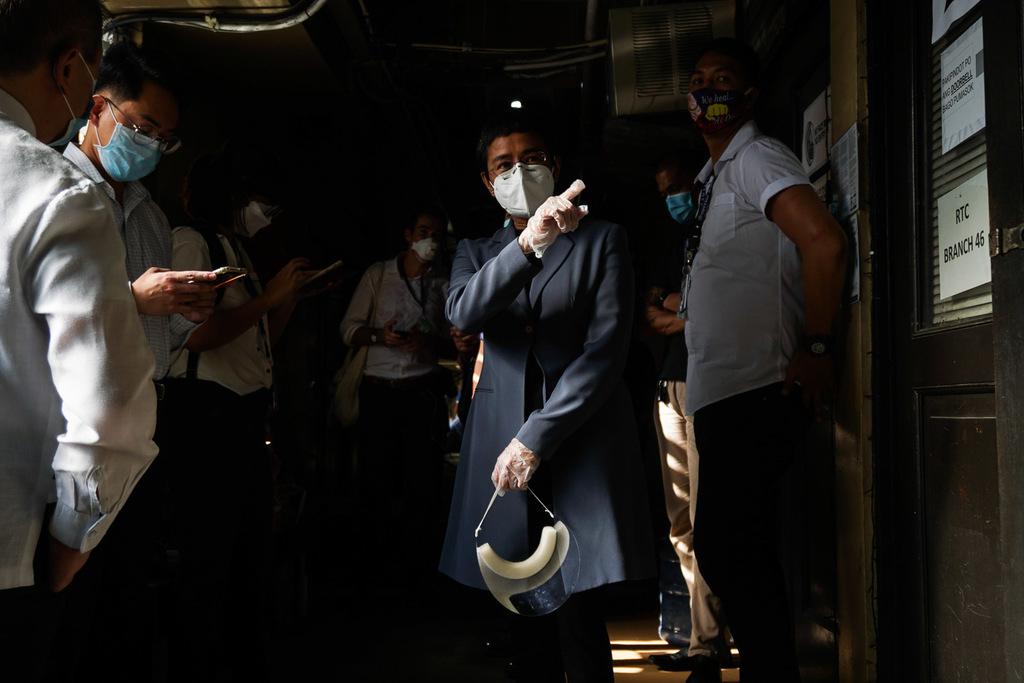 SINGAPORE (UPDATED) – While Rappler’s Maria Ressa lost in a Manila court, her guilty verdict on Monday, June 15, opened the door to another kind of trial, this time before the world.

The cyber libel conviction of Ressa and former Rappler researcher Reynaldo Santos Jr put in the global spotlight the state of democracy in the Philippines under President Rodrigo Duterte. (READ: Why democracies should push back vs Maria Ressa verdict)

With her name used in headlines without needing an introduction, and her interviews aired on major networks across the globe, Ressa has become internationally the most recognizable face of the fight for democracy in the Philippines. Another prominent figure, Senator Leila de Lima, is now in jail, while the opposition remains fractured.

The courtroom, in other words, has gotten bigger. And in this global court, at stake is more than a fine and jail time, but the country’s name on the world stage – a factor when it comes to investments and foreign aid.

In fact, the world’s leading news groups – among them, the New York Times, the Washington Post, the Guardian, CNN, BBC, and Al-Jazeera – have all put Ressa on their news agenda. The Washington Post even devoted an editorial to Ressa, while Bloomberg, a go-to news outlet for the world’s top businessmen, published an opinion piece warning investors about the effects of Ressa's case.

Global personalities, including former US secretaries of state Hillary Clinton and Madeleine Albright, have also spoken out.

Ressa, 56, is a veteran investigative journalist who spent most of her career as CNN bureau chief in 2 offices she opened, Jakarta and Manila, and later headed the news team of Philippine broadcast giant ABS-CBN, before founding Rappler. In December 2018, TIME named her a Person of the Year, while the same magazine, in March 2020, named her one of the most influential women of the century.

Duterte’s critics said the case is not an innocent complaint by a businessman named Wilfredo Keng.

Keng was included in the Rappler article in 2012 because of his connection with then-chief justice Renato Corona, who was going through an impeachment trial.

It was only 5 years later, in October 2017, that Keng filed a libel complaint with the justice department over the article against Ressa, Santos, and Rappler. This was around 3 months after President Duterte slammed Rappler in his State of the Nation Address.

Keng, one of the Philippines’ richest businessmen, has ties with Huang Rulun, a Chinese tycoon who donated to the Duterte government a mega drug rehab center. Keng was also the contact person for the construction company hired by Huang to build the rehabilitation center. One of the government contracts his company has gotten since involves the reclamation of part of Manila Bay under the Cavite local government.

Keng’s daughter, Patricia, was appointed by Duterte to a government post two years after he filed a complaint against Rappler.

Duterte’s critics said the government, which filed the case on behalf of the businessman, is using it to harass a critical news outlet and stifle a free press. Rappler has produced stories critical of Duterte’s anti-drug campaign and his propaganda network, which Ressa exposed in a 3-part series.

“I’ve been the cautionary tale: be quiet or you're next,” Ressa said.

US, EU speak out

While this cautionary tale is dismissed by many in the Philippines, the world’s powers that be have taken notice.

Two global juggernauts – the United States and the European Union – voiced concern on the same day about the conviction of Ressa and Santos.

“We are concerned by the trial court’s verdict against Maria Ressa and Reynaldo Santos Jr,” said the US State Department in a statement Tuesday evening, June 16.

“We hope this case is quickly resolved in a way that reinforces our long-shared commitment to freedom of expression, including for members of the press,” the State Department added.

In a separate statement, the EU said the verdict “raises serious doubts over the respect for freedom of expression as well as for the rule of law in the Philippines.”

“We expect the Philippines, like all countries, to uphold its international human rights obligations and protect and promote fundamental freedoms,” said the EU External Action, which serves as the EU’s diplomatic service.

Three American senators – Edward Markey, Patrick Leahy, and Dick Durbin – said in their own statement Tuesday that the verdict on Ressa and Santos was “a travesty of justice.”

“It is shocking to see the Philippine government strain to extend its legal reach to target journalists while so many extrajudicial abuses cry out for investigation and prosecution,” the US senators said

Markey, Leahy, and Durbin were the same US senators who pushed for travel and financial sanctions against Philippine officials who put Senator De Lima behind bars. In December 2019, the Duterte government banned them from entering the Philippines.

The Washington Post published an editorial on the same day condemning Ressa and Santos' conviction. The verdict “ought to be shocking to democratic nations,” wrote its editorial board.

“The Philippines’ slide toward dictatorship deserves much greater resistance from Washington – if not from the White House, then from Congress,” the Washington Post said, noting it was 15 months ago when the US State Department last spoke out on Ressa’s case.

Opinion columnist Clara Ferreira Marques of Bloomberg, whose readers include the movers and shakers of big business, said that Ressa’s conviction “should give investors in the Philippines a pause.”

Marques said that while Ressa’s conviction is “the sort of headline that’s often overlooked by foreign executives and fund managers casting around for fast-growing economies," they “would be wrong to gloss over this one.”

“Duterte’s rule has already seen institutions eroded and top-level opponents targeted. If fewer questions are asked, that will reduce transparency and drive up the risk premium for investing in the Philippines. That’s something the coronavirus-weakened economy can ill afford when inbound investment is already falling,” the Bloomberg columnist wrote.

‘I stand with Maria Ressa’

Global icons have also lent their names to Ressa’s cause.

Albright and Clinton, two of three former female heads of the US State Department, condemned the verdict on the Filipino journalist. “I stand with Maria Ressa,” Albright tweeted, while Clinton said in a separate tweet, “We must fiercely protest attacks on the press. They are attacks on democracy.”

Special rapporteurs of the United Nations, international news groups, and even social media platform Twitter have also joined the global uproar against Ressa and Santos’ conviction.

Peter Greste, a former Al-Jazeera correspondent imprisoned for a year in Egypt, said the case is more than just about Ressa and Rappler. “We also need to understand its significance internationally. This is an international test for respect for the rule of law.”

Referring to Ressa’s case, Clooney wrote that “no one should be watching more closely than the US government.”

“Because as well as being Filipino, Maria is American. And it has been a hallmark of this administration to strongly defend its citizens captured and falsely imprisoned abroad: by sanctioning Turkey’s interior and justice ministers for detaining Pastor Andrew Brunson, intervening in court proceedings against A$AP Rocky in Sweden, and negotiating hostage releases around the world,” Clooney said.

“If Maria is convicted and locked up for doing her work, the message to other journalists and independent voices is clear: Keep quiet, or you’ll be next,” she added.

The message to Duterte is also clear: the world is watching. – Rappler.com