After red hot speculation, Lachie Neale confirms he will stay with Brisbane Lions 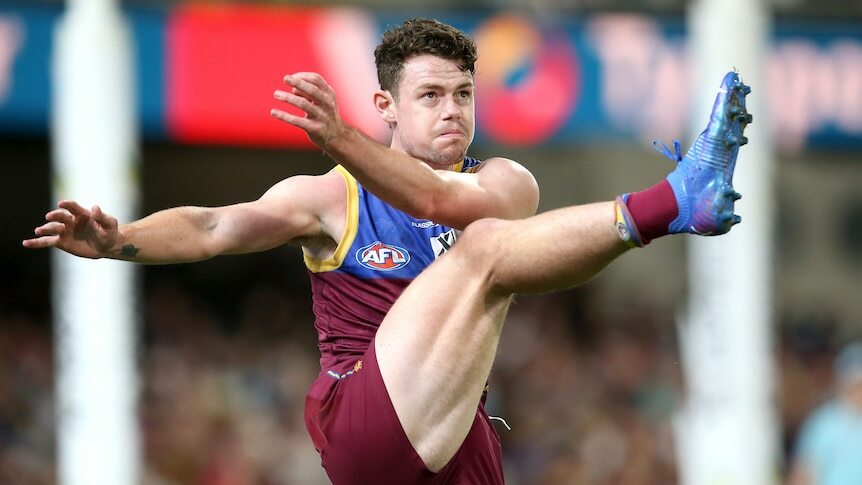 Reigning Brownlow medallist Lachie Neale has reaffirmed his commitment to the Brisbane Lions, confirming he'll remain with the AFL club next year.

"I'm committed and staying with the footy club," Neale said in a video released by the club after the meeting.

"It's been a whirlwind few days and everything has sort of got a little bit out of hand but I'm fully committed to the club and I came in and told Fages and Danny Daly and Swanny today that that's the case, so I'm so excited to be pushing on."

Neale and his wife Jules are expecting their first child, and had been weighing up where they would like to raise their family.

The 28-year-old says they had discussed a potential return to Western Australia, where they'd first met.

"She's from WA and has a lot of family and support network and friends in WA," said Neale.

"Obviously with the COVID situation the last couple of years it's been really hard for her to see her family and friends, as it has for a lot of people.

"I've got a great support network in Perth as well so we were half considering the prospect of getting back at some stage, but after sitting down and talking it through with our family and our friends and the club and with my management team, it became pretty clear after a couple of days that this is where the best place for us to be is, in Brisbane – firstly for my footy, and secondly we believe we can get the support network around us that we need moving forward."

Neale spent seven seasons with Fremantle before moving to Brisbane at the end of 2018, but the Lions say he never requested to be traded back to the Dockers.

The star midfielder says the situation had been "blown out of proportion".

"We know it's challenging times for everyone with COVID and we're no different, we're human, and it probably got played out a little bit sooner and earlier than what we thought," he said.

"We hadn't put that amount of thought into it, but now that we've made that decision we're really happy and can't wait to get stuck into next year."

Neale concedes it had been tough dealing with speculation that he was trying to force his way out.

"It has been a little bit rough some of the stuff in the media and obviously there's always going to be social media attached," Neale said.

"It has probably taken its toll a little bit – I'm pretty weary and tired at the moment but super excited about what the future holds for both of us.

"And we've got a beautiful baby girl on the way in four weeks so we've got a lot to look forward to."