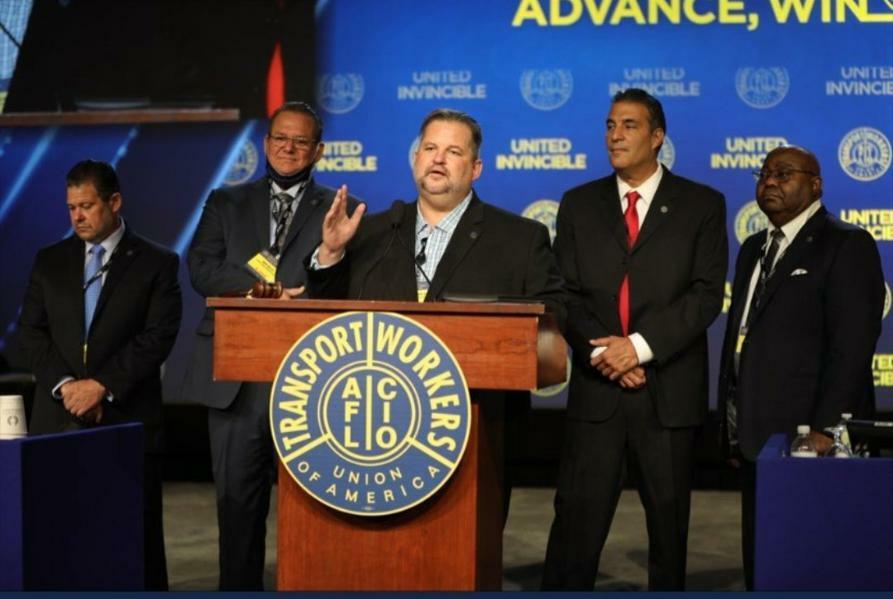 Bolstered by overwhelming victories in his re-election bid and in his fight against a raid on American Airlines mechanics, the former New York subway worker who heads the country’s third largest transportation union is looking to make new gains in the airline industry.

In fact, now that the Transport Workers Union, aligned with the International Association of Machinists, beat back the raid attempt by the outlier Aircraft Mechanics Fraternal Association, John Samuelsen wants to launch a counter-raid on AMFA mechanics at Southwest and Alaska Airlines.

Like AMFA leaders, Samuelsen objects to the use of the word “raid,” as he seeks new members — in this case, at Southwest, where AMFA has about 2,700 mechanics, and Alaska, where it has about 600.

“It’s not a raid, because they are not a union,” Samuelsen said. “Their actions betray any claim of being a union. When we made it public that these sleazy characters were raiding TWU (and IAM) members, we had their members at Southwest and Alaska reaching out to us. We already have cards signed at Southwest and Alaska.”

Bret Oestreich, AMFA national director, said, “TWU should probably prioritize and focus on taking care of their own divided house and their members from American Airlines, rather than spreading more divisiveness to the rest of the aviation industry.”

“Does the TWU really have Southwest or Alaska Airlines’ best interests at heart?” Oestreich added.

Samuelsen has a growing presence as a national labor leader, but his primary influence is in New York, where he is frequently quoted in local media. At one time, he led the historic TWU local that represents bus and subway workers. In July, Samuelsen became the first major union leader to break with former New York governor Andrew Cuomo, following sexual scandals. A month later, Cuomo stepped down.

Last month, Samuelsen was re-elected international president, as delegates backed him and his leadership team, including Executive Vice President Alex Garcia, by 64-0 for a unanimous victory. “That’s never happened in the history of the union,” Samuelsen said. “It’s the culmination of four and a half years of hard work.”

Samuelsen does not reject comparison to Mike Quill, the onetime Local 100 leader who may have been New York City’s most famous labor leader. Quill, an Irish immigrant, co-founded the TWU in 1934. He died weeks after settlement of a 12-day 1966 subway and bus strike that had paralyzed the city. Quill was often front-page news in New York when the city had a dozen newspapers.

“If Quill was around today in world of Twitter and Facebook, he’d be president of the United States,” Samuelsen said. “I have tried to adopt his fighting mentality blended with pragmatism – pick smart fights but never take the union to the edge of the cliff unless that’s the only pathway to victory.”

TWU’s active membership totals about 150,000. Samuelsen expects an increase to about 160,000 in the coming year, reflecting recovery from the pandemic, with most gains coming in the airline industry. Successful organizing means that membership has increased from 137,000 in 2017.

During the pandemic, airline unions worked with management to lobby for the CARES Act, a historic labor victory that provided $39 billion to pay the salaries of tens of thousands of airline employees.  Unions for flight attendants and pilots worked with the TWU and IAM.

Samuelsen said AMFA leadership was largely absent from that effort, choosing instead “to plot a scheme to steal TWU mechanics.” He said AMFA practice has been to trade union protection for some workers in return for higher pay for the remaining mechanics. “It’s the ultimate form of concessionary bargaining,” he said. TWU, by contrast, seeks to unite workers and to bring work back from overseas.

Oestreich said that American Airlines jobs were lost during the pandemic and that it took years to reclaim concessions made during American and US Airways bankruptcies in 2004 and 2011. He said Alaska and Southwest mechanics “enjoy the benefits of a craft specific union where every dime, every nickel spent and every thought of every second of every day is about their promoting their craft.”

In September, the National Mediation Board ruled that AMFA did not have enough signatures to enable a union election. AMFA filed an appeal, saying it had submitted 7,228 signatures, more than the 50% plus one it needed in an election among 14,402 mechanics.

“JetBlue follows all federal and local labor regulations and the safety and wellness of our crewmembers and customers is always our primary focus,” JetBlue spokesman Derek Dombrowski said Monday.  He said contract talks are continuing.