After 12 Years, Big E Finally Wins the WWE Championship: ‘It Was a Spiritual Experience’ 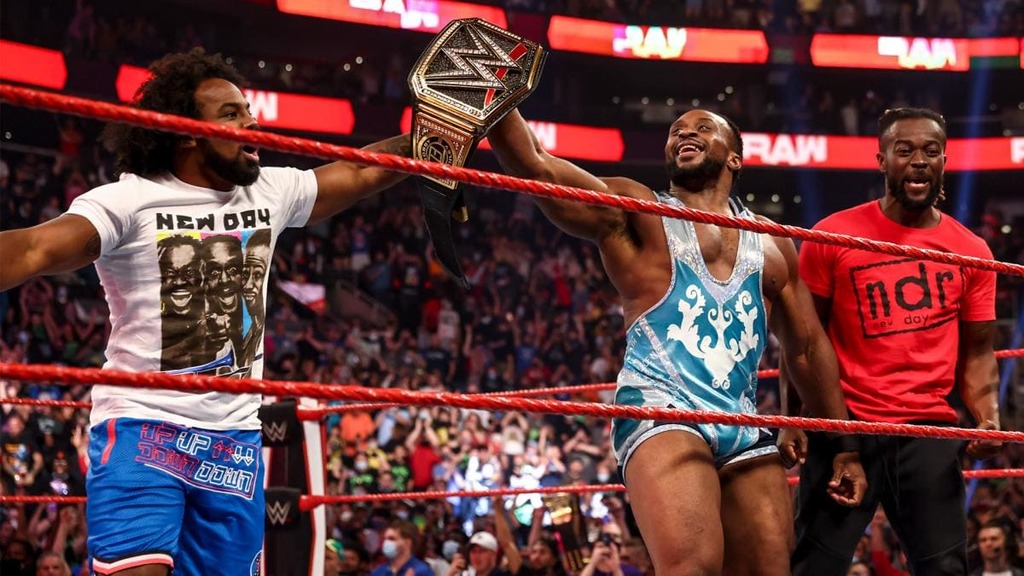 Big E cashed in his Money in the Bank contract Monday night on Raw, then defeated Bobby Lashley to become the new WWE champion. WWE’s present and future now rest on his broad shoulders, and he is in place to help carry the company and become the signature face of the Raw brand.

Twelve years into his WWE career, Ettore Ewen—best known by his ”Big E” nickname from high school—accomplished a feat many have dreamed of but only a precious few have achieved. Ewen produced the rarest type of feeling, creating an organic moment in a manufactured business. And he left no doubt, propelling himself to the next level of stardom.

“It was a spiritual experience,” says Ewen, who was blown away by the reaction of the crowd. “I connected with this massive group of people that all wanted the same thing. To have that support and the people behind me, it’s a moment I’ll never forget.”

Sensitive, compassionate and brave, Ewen brings a distinct heartbeat to the WWE championship. The son of a preacher, Ewen has developed a combination of personality and power unlike any other person throughout pro wrestling, and he is ready to give WWE a shot of adrenaline on Monday nights.

Ewen has continually elevated his work to new heights in WWE, enhancing his presence and showcasing his endearing charisma. His overwhelming strength adds a different dynamic to his matches, yet he also possesses the agility and versatility to work a multitude of styles in the ring. It comes as no surprise that Ewen would get a run with the belt. Yet, even though that appeared inevitable, the moment on Raw was executed so perfectly, with just enough doubt sprinkled in to make people question how the sequence would play out. To the credit of everyone involved, it was no certainty that a new champion was going to be crowned until Ewen was celebrating the win with New Day partners Kofi Kingston and Xavier Woods.

“It still would have been meaningful if I had won the title on SmackDown, but to me, this was the way to do it,” Ewen says. “They had to be here. I don’t get here without them.”

The win spelled the end of Lashley’s run as champ, an excellent title reign that began in March. Lashley made the absolute most of his run, cementing himself as a made man in WWE. But an ending was inevitable, as the only certainty for any pro wrestling champion is that the belt will eventually change hands.

Standing in the hallowed halls of Boston’s TD Garden, in the same corridor where Kevin Garnett and the Celtics celebrated an NBA championship, as well as where Zdeno Chára and the Bruins returned home to hoist the Stanley Cup, Ewen stood with the WWE title resting on his shoulder and reflected on the moment he won wrestling’s most famed title.

“At first, I couldn’t find the hard camera,” an emotional Ewen says. “I lost where I was in space when Bobby grabbed me for the Dominator. This is the single biggest night of my career, so I wanted to get that moment right.

“Then, as I was going for the Big Ending, I had a very big man in my hands so I was only focused on the task at hand. After that, all I could hear was that reaction from the crowd.”

Ewen then shined a light on those that helped put this moment into action, highlighting some influences from earlier in his career.

“I have to take my hat off to so many people who helped me along the way,” he says. “I think back to Michael Tarver, who would sit down with me in FCW when I was super green and didn’t know what I was doing. He helped me understand how to carry myself and connect with people in the ring. Curt Hawkins gave me the Big Ending. That’s been my finish for 12 years because of him. There are so many. Mike Doughty. And, of course, Kofi and Woods.

“With us, it’s a brotherhood. We hurt together, we smile together, this is real. All the toughest times have brought us closer together. I’m grateful for all the valleys and lows with them, because we got to experience all of this together. I’m so grateful for everything I have done in WWE, because I had the time to grow. I needed those years of seasoning. I think back to all the times I was so scared to do the right thing, but now it is so comfortable, and so much of that is because of Woods and Kofi. I had no business even getting to WWE, but I’ve been blessed along the way to get to this point, and I’m so thankful.”

The journey to the top of the industry has been long and arduous, but it starts anew—and brimming with optimism—as Big E embarks on his first world title run.