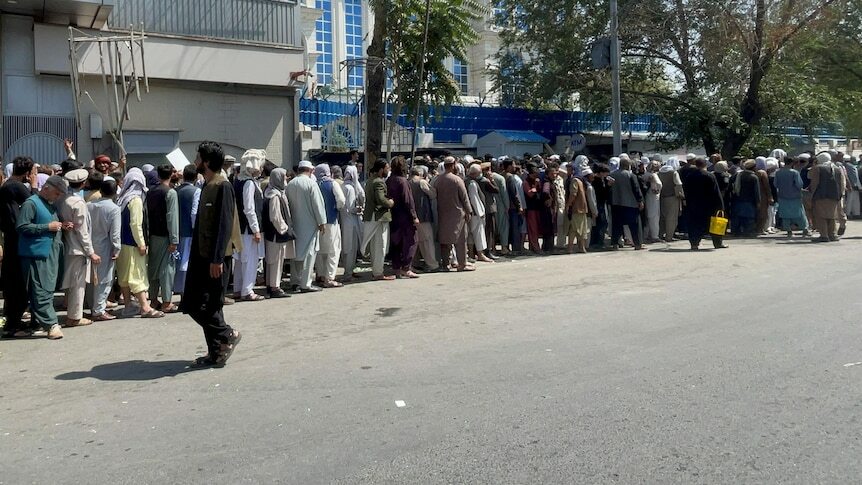 Kabul resident Sara is quickly running out of the essentials — food for her family and medication for her ill mother.

The political upheaval in Afghanistan has caused chaos at banks and ATMs in the capital, leaving Sara's family to survive on less than $47 a fortnight, and with no guarantee she can secure more cash.

Banks in Kabul closed their doors last month as the Taliban advanced.

Some reopened last week, but with restrictions on the amount of money locals could withdraw and transfer.

Sara said she could only withdraw enough money for her family to top up on supplies of food and medicine for the next few days.

"But there's no money in the bank. They told me they cannot give me much."

Sara's family has been surviving on a supply of basic food at home and her mother, who has a respiratory condition, is in regular need of an oxygen tank.

"The small amount of flour that we had at home we're using. It's just bread and tea that we eat."

Sara was working with a market research company before the Taliban took over Kabul, and was a medical student at university.

As soon as she heard the Taliban had taken over Kabul, she rushed home. But by then, the banks had already closed.

"They told us, 'Your wages have expired.' There's no more wages anymore, it is all in the bank and we had no cash," she said.

She will have to make a trip to the bank again this week, as the money she withdrew a fortnight ago has already been spent on supplies.

She'll have to join a long queue, with the chance she'll have to leave empty-handed because the cash supply is limited.

"Our struggles become worse and worse by the day. We have no future," Sara said.

Another Kabul resident, Hamid (not his real name), also desperately needs access to his savings.

After a week of regularly going to the ATM and waiting in a huge crowd of people, he was able to withdraw about $270.

It's enough to get him through another few days with basic supplies, but not enough to cover his debts.

"I have borrowed money from friends so far, but if it continues like this we will be bankrupt," he said.

"People are even selling their houses to find money and continue their lives."

Hamid was a translator for a foreign non-government organisation before the Taliban took over.

His office remains closed. His 128 colleagues are hoping their company will help them leave the country, although it has not responded to requests.

Hamid will go back to the bank this week in an attempt to withdraw more money. But he is deeply concerned about his future, given he now has no income.

The Afghanistan International Bank said its branches were open with limited services because of the "availability of cash", particularly outside of the capital city.

"Due to logistical challenges over the past weeks, and expectation that cash notes will not be supplied at this stage to provinces, availability of cash is expected to be initially limited to Kabul," it posted on its website.

"Our provincial branches are operating on an even more limited basis, and ability to meet withdrawals will depend on availability of cash notes even within the limits above"

The World Bank and the International Monetary Fund have cut off finance to Afghanistan as the international community decides whether to recognise the Taliban as the legitimate government of the country.

Most of Afghanistan's foreign-held assets have been frozen by the US central bank, and credit agencies are warning that the economy is on the brink of collapse.

UN Secretary-General Antonio Guterres has warned of a looming humanitarian crisis as fuel, food and medicines run out and half the population lives in poverty.

It said the current restrictions limiting customer transactions were temporary and it was still working towards a solution.

But there was no news about access to the central bank's reserves.