Afghanistan has been suffering through a grave humanitarian crisis since the Taliban took control on August 15, 2021. According to the UN, 95 percent of Afghans are going hungry. It’s a catastrophe that worsened after the fall of Kabul one year ago, exacerbated by the US decision to freeze the Afghan Central Bank’s assets and the international sanctions that have crippled an already fragile economy.

The Afghan economy was already in a terrible state when the Taliban seized Kabul a year ago, with half the population living below the poverty line. The situation has only worsened since then. International aid accounted for 80 percent of the Afghan state budget – but it was cut off upon the Taliban victory, prompting economic collapse and depriving many Afghans of basic necessities.

“Afghans’ lives were turned upside down on August 15, 2021,” said Fereshta Abbasi, an Afghanistan specialist at Human Rights Watch. “People are dying of hunger amid one of the world’s worst humanitarian crises.”

When Samy Guessabi, regional director of the NGO Action Against Hunger, arrived in Kabul in March, he found the once-bustling Afghan capital practically at a standstill. “Many Afghans have lost their jobs and people still working have seen their salaries drop massively,” he said. “At the same time, the cutting off of international aid has prompted a cash crisis. So people can’t even withdraw their savings from the bank. And Afghans who have left the country are finding it very difficult to send money back to their relatives.”

“Many families are reduced to prioritising the most rudimentary needs – for shelter and food,” Guessabi continued. “But when you walk past the market stalls, you can see there isn’t a shortage of food. Rather, people can’t afford to buy it.”

‘Afghan women have lost everything’

In total, nearly 20 million people – half of the Afghan population – are suffering from food insecurity and 95 percent of the population do not have enough food to eat, according to the UN’s World Food Programme (WFP). More than a million children under the age of five suffer from acute and prolonged malnutrition.

In Ghor province, in central Afghanistan, the WFP recently announced that tens of thousands of people are facing level 5 “catastrophic” acute food insecurity, the highest level short of a famine. “The situation is even worse in southern Afghanistan, which is predominantly agricultural and suffers from frequent droughts,” Guessabi said.

In response to this situation, Action Against Hunger regularly hands out cash to vulnerable sections of the population. But this emergency measure is “far from ideal” and often insufficient, Guessabi lamented.

Women and children are the primary victims of this economic and humanitarian crisis. “Children are taken out of school and put to work,” Abbasi said. “Families will sell one or more to provide the means to support the rest of the family.”

Children are often sold to become cheap labour, but girls are also sold into forced marriages – practices that are longstanding in Afghanistan but are becoming more and more common.

“Afghan women have lost everything; like men, they’ve often lost their jobs – although sometimes they were the only ones working in the household – but in addition to that they’ve lost a lot of fundamental human rights,” Abbasi said.

The Taliban have tightened restrictions against Afghan women – imposing the burqa on them and forbidding them to travel alone. Although they are still allowed to work in certain jobs, Afghan society now has a clear segregation between men and women.

A further consequence of Afghanistan’s crises is that the health system is exhausted.

“This humanitarian crisis has been going on for decades, with wars, political turmoil and environmental problems, but now it’s reaching fever pitch,” said Amber Alayyan, deputy head of the Médecins Sans Frontières (Doctors Without Borders or MSF) Afghanistan section, which has been operational there since 2011.

“And as malnutrition gets worse, people become more vulnerable to diseases and the strain on the health system intensifies,” Alayyan continued.

“I remember one woman who came in with her baby, about eight months old – he was tiny,” Alayyan recounted. “I was talking to her and I realised that her dinners mostly consist of just a cup of tea. She was totally malnourished and so she didn’t produce enough milk to feed her baby.”

In western Afghanistan’s Herat region, where MSF has a clinic, Alayyan sees about 800 patients a day compared to about 100 a day just a few months ago. However, the MSF centre only has about 60 beds.

“We can see people coming from much further afield than we used to,” Alayyan said. “People are coming to our facilities because most local hospitals are severely understaffed and are short of crucial drugs like antibiotics.”

Alayyan and Guessabi have similar assessments of the past year: the pressure on humanitarian organisations is worse than ever. Even though both MSF and Action Against Hunger have increased their budgets for Afghanistan, they are still worried about the next few months.

“We’re approaching the rainy season and after that it’s winter,” Guessabi said. “Some villages are going to become inaccessible. I really don’t want to imagine what it will be like if their residents aren’t able to stock up beforehand."

“The international sanctions are having a terrible effect on the Afghan population,” he added. “The only way out of this crisis is to allow the economy to get going again – and the only way for that to happen is to allow foreign investment to flow into Afghanistan.”

The international community has made renewed aid to Afghanistan conditional on the respect for human rights, notably women’s rights. In March, when the Taliban decided to ban girls from secondary school, the World Bank suspended some $600 million (€541 million) in aid.

“Over the past year, the Taliban have become more and more repressive instead of acceding to the international community’s demands for improvements in Afghans’ living conditions,” Human Rights Watch’s Abbasi said. “The Taliban should act urgently to resolve these issues. And in any case, international organisations must continue to fight for solutions to help the Afghan people.”

But as things stand, it looks like the situation is only getting worse. Alayyan is seeing more and more patients arriving with serious conditions. “We’re seeing huge numbers of people coming in with acute diarrhea, measles and cholera,” she said. “This is a direct consequence of poor nutrition and poor access to health services. It’s a vicious circle.” 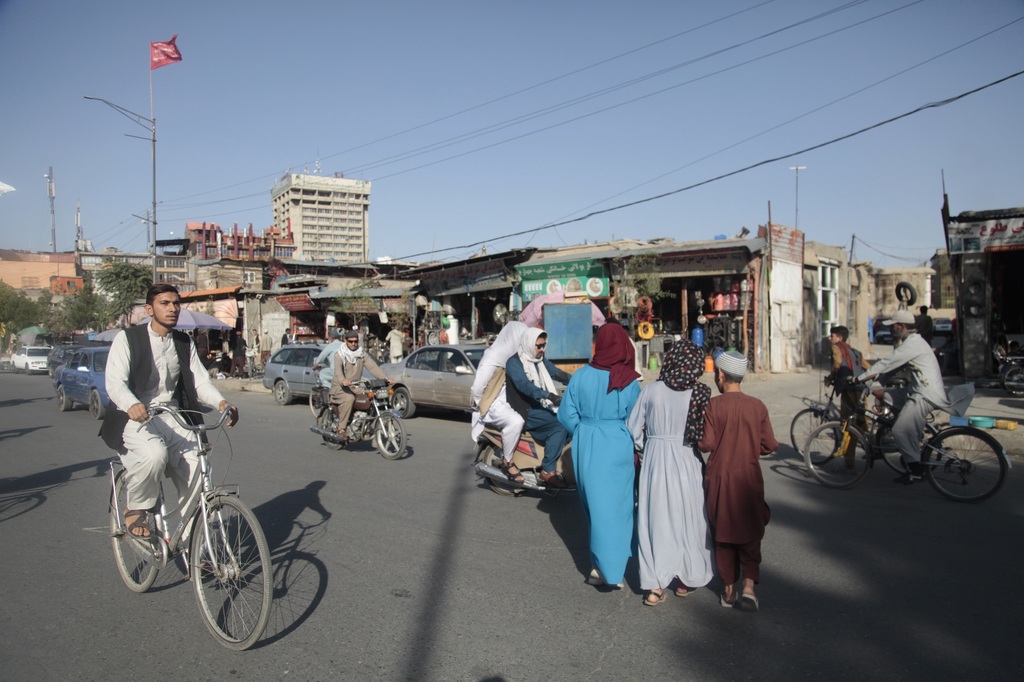 A year on, the Taliban savor victory, while other Afghans pay the price
For the first time in decades, Afghans are living in relative peace. But with sanctions on the Taliban, the economy…

WEKU
From analysis to the latest developments in health, read the most diverse news in one place.
Taliban leaving 24million Afghans hungry with fears more will die than 20 years of war

Since the 20 year Afghanistan conflict ended last year, the country could suffer more deaths - as one of the…

The Telegraph
Afghanistan in anguish one year after U.S. withdrawal

Axios
Afghanistan: NGOs call for assets to be unfrozen to end ‘near universal poverty’

The Guardian - UK
One place to find news on any topic, from hundreds of sites.
Taliban must change course, uphold rights of girls, women, EU says

The European Union urged the Taliban to change tack and uphold the rights of women, girls and minorities on Monday,…