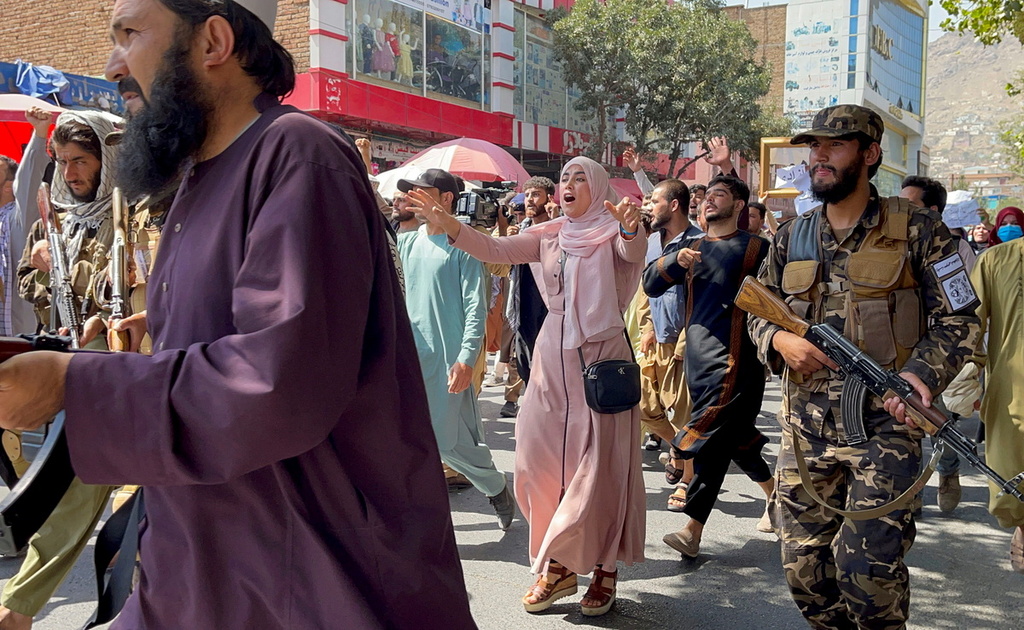 A group of Afghan women crouched on the side of a Kabul street and took cover after armed members of the Taliban fired shots into the air to disperse hundreds of protesters.

One of them spoke rapidly at the camera filming them.

"These people (the Taliban) are very unjust, and they are not human at all," she said. "They do not give us the right to demonstrate; they are not Muslims but infidels."

There were no known casualties from the firing, and video footage from Tuesday's protests, some of it shared on social media, showed Taliban pointing their rifles in the air before they pull the trigger.

But the protests, nearly a month after the Taliban seized control of Kabul, along with daily, smaller demonstrations around the country often led by women, pose a challenge to the new Afghan government announced late on Tuesday.

The hardline Islamist group has urged Afghans to be patient, allowing it time to form a government before it addresses people's demands.

"They were asked to be a little patient and when the system has been established and the organisations are functioning then they will get back to you," a Taliban spokesperson said this week, referring to women protesters.

Now ministers have been named, the expectations of a society where civil rights have been strengthened over the last two decades are only likely to grow.

The last time the Taliban ruled Afghanistan, from 1996-2001, girls could not attend school and women were banned from work and education. Religious police would flog anyone breaking the rules, and public executions were carried out.

The group has promised to be more tolerant this time - a commitment many Afghans and foreign donors will be monitoring closely.

Female students in the western city of Herat said they would lobby loudly for greater representation in the new government and for their rights to be respected.

"Women have to come out to save our jobs and status in society. It is really now or never situation," said Dariya Imani, a student at a business school at Herat University.

She said her cousins were part of the protest in Kabul today.

"We are not brave, we are just desperate to protect our basic rights," Imani said.

Taliban leaders have vowed to honour women's rights in accordance with sharia, or Islamic law. But they also indicated there would not be any women among senior government positions, and none have been announced so far.

On Tuesday, men and women also denounced what they see as Pakistan's guiding hand behind the Taliban - support that Islamabad denies.

Some referenced the only remaining armed resistance to the Taliban - fighters in the Panjshir Valley north of Kabul who have been dislodged from the main towns but who have vowed to carry on fighting from their mountain hideouts.