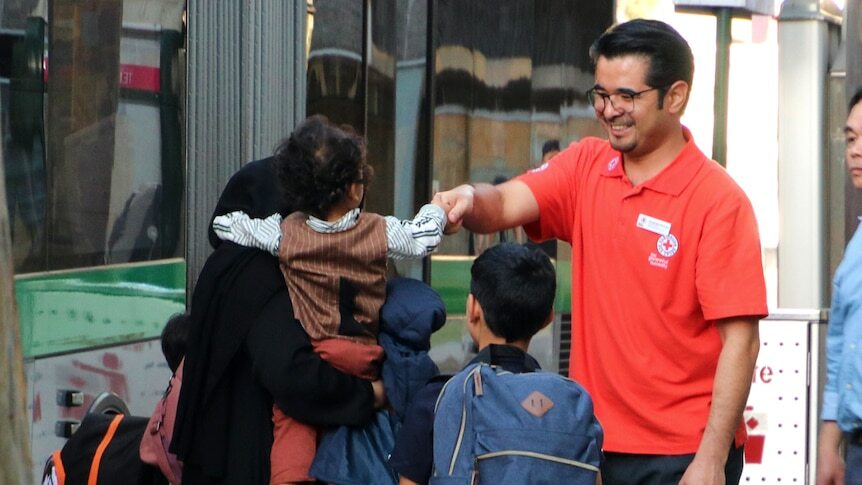 With another group of evacuees from Afghanistan released from hotel quarantine, Australian Afghans have been working to welcome them into the community.

Mohammad Mahdi Mahrami fled Afghanistan about 10 years ago in search of a better life and ended up in Perth last year.

He now helps his father run an Afghani restaurant in the south-eastern suburb of Maddington.

The father-son duo has been busy coordinating meals for those who escaped the Taliban takeover and were flown to WA last month.

Mr Mahrami said he believed food was an essential part of feeling at home in a new environment.

"When you move from your country to another country, the whole scenario when you reach there, it changes," he said.

On Friday, the first group of about 100 arrivals from Afghanistan were released from hotel quarantine.

Yesterday, a second group of around 60 evacuees completed their 14 days in hotel quarantine and were taken to another hotel in the city as temporary accommodation.

Mr Mahrami, who is from the Hazara ethnic minority group, said the Afghan diaspora had been reeling from the devastation in their home country.

"It really affects [us] because most of the Afghans who are Australian citizens living here, some of their families are [still] in Afghanistan," he said.

"Before the Taliban took over, people could travel and see their family, so there was freedom.

"[For Afghan] people living here, for them it's very hard now to travel and see their families, even their family living there it's difficult for them to live."

He said it was a particularly "scary time" for marginalised ethnic minorities.

"The current situation of Afghanistan for the Hazara ethnic [population] or for the other minorities right now is extremely dangerous," Mr Mahrami said.

"The regime is very dangerous because they don't accept human rights or other rights, they just follow their own. If someone is against them, they'll straight away kill.

The Australian Red Cross has been assisting the evacuees access support services in and out of quarantine.

The majority will be repatriated to the eastern states to reunite with family members, while some will remain in Perth.

Migration support lead Liza Beinart said those who chose to stay in Perth would be part of the Red Cross Humanitarian Settlement Program.

She said now that most evacuees had been released from hotel quarantine, the priority would be to help them integrate into the community.

Ms Beinart said providing new arrivals with culturally appropriate services was another crucial element which could often be overlooked.

"It's incredibly important for the multicultural sector and settlement services to be supported to provide this assistance to new arrivals, because if we don't provide tailored support there's a real possibility of people with vulnerabilities slipping through the cracks," she said.

Providing a 'sense of familiarity'

Ms Beinart said it was important for services to have culturally diverse staff to help those they were assisting feel more at ease.

"We are able to provide our newly arrived clients with that sense of familiarity, and somebody like Assadullah and other colleagues who are from other countries of origin speak the languages and can also demonstrate and role model success," she said.

"[They show] how it's possible to arrive in similar circumstances they're arriving in, but then five or 10 or 15 years later demonstrate they've successfully integrated into Australian society.

"Hiring people of lived experience and background is incredibly important to role model that."

Mr Mahrami's hope now is to see Australia welcome more Afghans who are desperate to leave the Taliban-occupied country.

He said the positive contribution of Afghan refugees was already evident in Australian communities.

"You can see in Australia, my people are involved in different type of business. From construction to food industry, automobile, drivers … in every industry you can find Afghan people."

There are at least another 80 evacuees who are still completing their time in hotel quarantine, with many more expected to be released in the coming days.