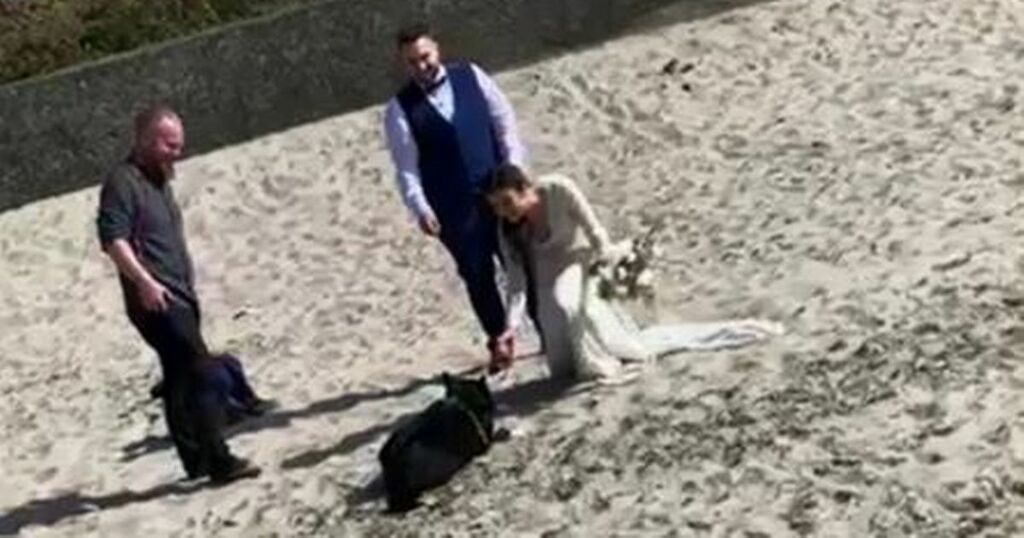 Rescue dog lands into Ballyholme Beach wedding photos and demands a game of fetch
'We had an intimate wedding party with just 15 guests and with the addition of Lucie, it made 16 so…

Belfast Live
Stacey Solomon's wedding: Inside look at the marriage taking place at her £1.2m home

Daily Mirror
Inside My Wedding: Belfast woman comes home from US to have her special day

Belfast Live
One subscription that gives you access to news from hundreds of sites
Bride halts wedding after realising that she’s missing half of her dress: ‘The best way to handle it’

Toni’s mum passed away three days after the wedding

When it comes to planning a wedding, most brides spend hours going over every detail to make sure their special day turns out as imagined.

No matter how much they plan, they can never guarantee something unexpected won't happen on their big day - but it doesn't always have to be a bad thing.

A young couple had a surprise guest at their wedding photoshoot, when a rescue dog turned up to play ball with them at a beach in Co Down, reports BelfastLive.

Lucie, a collie from Bangor, made Matt Rossi and Lore Montano’s special day even more memorable when she approached the bride and demanded a game of fetch by dropping a wet tennis ball at the hem of her wedding dress.

Without hesitation, nurse Lore Montana and Matt Rossie took time out of their day's schedule to play with Lucie.

Animal lovers Lore and Matt said the collie made their day all the better and they treasure the video and photos taken of the moment she gatecrashed the party.

Lore is a nurse and Matt is a pizza chef in Little Wing, Bangor, and after meeting in their native Sienna, Italy, Matt followed Lore to Northern Ireland to set up home together.

Lore said: "I moved here because of my work as a senior nurse and I got a fantastic job at the Royal Victoria Hospital.

"Matt stayed in Italy for a while but after a period of illness, he decided to make his dreams come true too and he followed me here to make a life together. We love it here, Bangor is our home.

"When we got married we only had a wedding party of 15 people at the Clandeboye Lodge which was beautiful.

"But Ballyholme Beach is a special place for Matt and I and we wanted our photographer Daniel Smith take our special wedding day photos right there - we just didn't now how special they would be.

"Because it wasn't long before we added another guest to the wedding list when Lucie turned up and wanted to play.

“We’re real animal lovers and it was a natural moment to just pick up the ball and start playing with her.

"She really didn’t leave us any choice but we loved every minute of it. She dropped the ball right at my feet and stared at us until I reached down and threw the ball for her.

“Then she came back for more. It was a magical little moment that Matt and I will never forget. It didn’t matter that I was in my wedding dress - everything was fine, Lucie was so lovely and it made us so happy to know she was happy on our wedding day too.

“We met Lucie on a beach that holds special memories for us and in that moment she became a special guest on our wedding day.

"We had a very intimate wedding with just 15 guests and with the addition of Lucie, it made 16. She’s part of our family history now and we cherish our photos with her in them.”

Lucie’s owner Judith Eakin, was not surprised to hear her collie had cajoled a bride and groom into playing fetch with her after her daughter Loren revealed what Lucie had done on their walk.

Loren said: “It’s fair to say Lucie is ball obsessed. My mum took her in four years ago when her previous owners left the country, and she has been a fantastic family dog.

"She’s always been full of energy walking about 10km a day and she’d play ball forever even though she’s getting older and slowing down a bit now.

“We were on one of our normal walks on Ballyholme Beach when she spotted Lore and Matt and decided to say hi and of course demand a game of fetch.

"I was a little bit away from her and I could see the whole thing unfolding. As I was running up to her, Lucie dropped the ball by the bride’s feet and gave her the stare. It’s basically her way of inviting you to play, or maybe insisting you play with her.

“Thankfully Lore and Matt were happy with Lucie’s invitation and they threw the ball for her. They were so chilled about it all, it was lovely to watch.

“Lucie doesn’t worry about wedding dresses or special days, all Lucie is concerned about is who will play ball with her.

“But they were happy so it quickly became one of those special moments and thankfully the couple were animal lovers and were happy to play with Lucie.

"We would have been there all day if Lucy had got her way but in the end I had to insist she stopped her game so Matt and Lore could be allowed to go back to their wedding day.

“ Lucie is a very special dog and she makes every day special for us, so no one was surprised when she made this wedding day even more memorable - we just love her for it.”

Do you have a dog story to share? Email paige.freshwater@reachplc.com.

Rescue dog lands into Ballyholme Beach wedding photos and demands a game of fetch
'We had an intimate wedding party with just 15 guests and with the addition of Lucie, it made 16 so…

Belfast Live
Stacey Solomon's wedding: Inside look at the marriage taking place at her £1.2m home

Daily Mirror
Inside My Wedding: Belfast woman comes home from US to have her special day

Belfast Live
One subscription that gives you access to news from hundreds of sites
Bride halts wedding after realising that she’s missing half of her dress: ‘The best way to handle it’

Toni’s mum passed away three days after the wedding