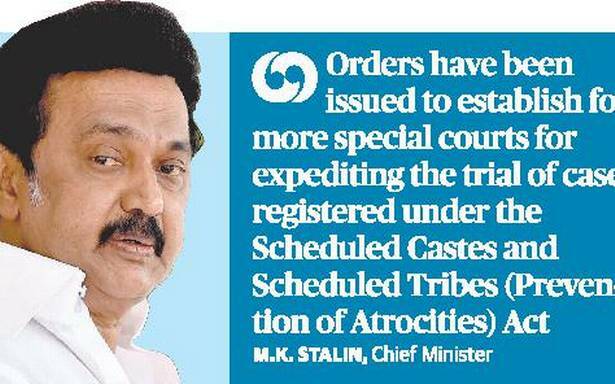 The Tamil Nadu government will introduce a Bill in the ongoing session of the Assembly to establish an autonomous Tamil Nadu Adi Dravidar and Tribal Welfare Commission, Chief Minister M.K. Stalin said on Wednesday.

He said orders had been issued to establish four more special courts for expediting the trial of cases registered under the Scheduled Castes and Scheduled Tribes (Prevention of Atrocities) Act, 1989.

The additional courts would be opened in Salem, Krishnagiri, Madurai and Tirunelveli districts, where cases were pending in large numbers.

The compensation granted to persons affected by atrocities would be increased to a minimum of ₹1 lakh and a maximum of ₹12 lakh, depending on the severity, he added.

Mr. Stalin said ‘model villages’ having common cremation grounds would be awarded a cash prize of ₹10 lakh for carrying out development projects.