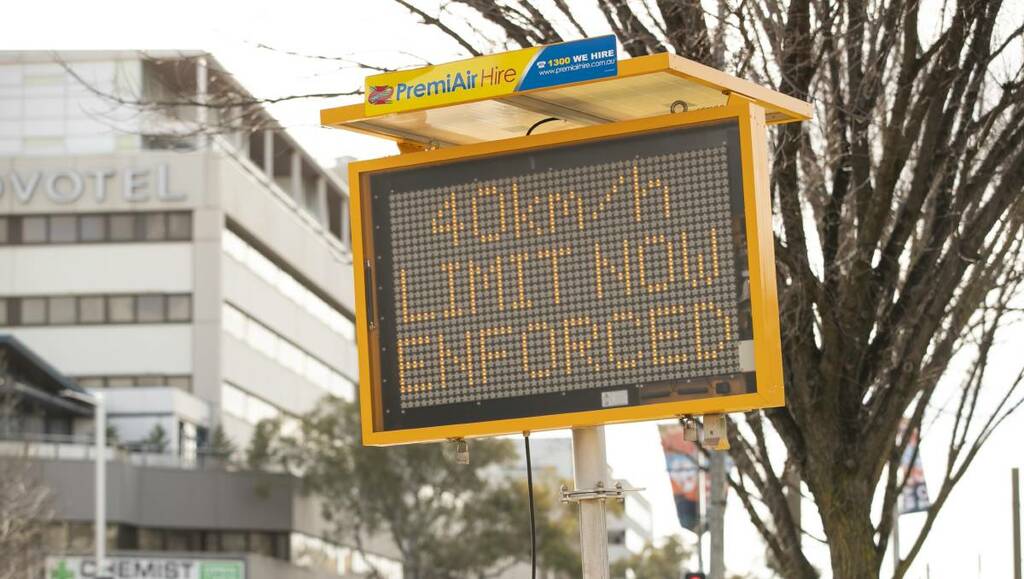 Traffic fine revenue is expected to rise by more than $32 million this year, with the increase driven by fines in a new 40km/h zone in the city centre where infringements "exceeded all expectations" and provoked significant community backlash.

Budget papers released this week showed the ACT government's traffic infringement revenue would rise "significantly" to $58.9 million from the interim outcome of $26.8 million in 2020-21.

"This is expected to decline in the forward estimates period as we anticipate driver behavioural change," the budget said.

The revenue boost came after a recommendation from ACT road officials to write to every licensed driver in Canberra to inform them of the new 40km/h speed zone was rejected by ministers.

Better Regulation Minister Tara Cheyne and Transport Minister Chris Steel knocked back the proposal made less than a week before the cameras were switched on, instead opting to continue a public information campaign.

Documents released under freedom of information laws showed officials from Access Canberra, which manages fines, and Transport Canberra and City Services, which manages speed limits, warned the public information campaign was "not considered to be a viable option in all the circumstances".

More than 20,000 Canberrans were caught speeding through the new 40km/h zone - on parts of Northbourne Avenue, London Circuit and Barry Drive - in an amnesty period.

"Whilst it was anticipated that there would be an increase in speeding offences detected, the actual number of offences captured has exceeded all expectations," a brief prepared on July 29 for Ms Cheyne and Mr Steel said.

The brief recommended writing to all Canberra drivers, at a delivery cost of about $370,000, to inform them of the change before fines were issued.

"This is the preferred option as the communications are likely to have the most impact with the least risk of administrative error," the brief said.

The brief also noted sending letters to all drivers would not require significant ongoing resources to manage the backlog of expected fines.

Mr Steel, who rejected the suggested mail-out while acknowledging the difficulty to do it in time, said Ms Cheyne was ultimately responsible and referred the brief to her.

Ms Cheyne highlighted the time it would take for letters to arrive and the cost of sending them as reasons for rejecting the suggestion.

The ACT government spent $78,065.71 on variable signage in the city and the public information campaign for the change to the speed limit in the city.

"Each warning letter would cost over $1 per letter in postage and stationery. In order to send warning letters, Access Canberra staff would have been required to first adjudicate each offence so as to retrieve data from the Rego ACT system to allow populating the warning letters with personalised information," Ms Cheyne said in an answer to a question on notice in the Legislative Assembly.

"Accordingly, the staffing costs are estimated to have been in the vicinity of $300,000, including significant diversion of resources."

The high volume of speeding fines issued by the new cameras, which recorded more than 27,000 offence detections between July 5 and August 8, required significant effort to process, government documents show.

The extra work would be enough to generate employment for an extra six full-time public servants for six months, a briefing prepared on August 10 for the head of Access Canberra, David Pryce, said.

"The flow-on impacts of the speed zone reduction in the city appears to not have considered the increased workload on the team and the need for additional resourcing," a briefing prepared for Mr Pryce said.

Eight public servants were adjudicating the offences each day in mid-July, up from the usual two officers tasked with daily adjudication.

More than half of the calls to the ACT government's traffic infringement staff in early August were motorists who had received fines in the city zone.

An ACT government spokeswoman said Access Canberra had "reprioritised its resourcing" since the briefing to "meet increased infringement volumes through reallocating internal resources to meet all statutory timeframes around the processing of infringements".