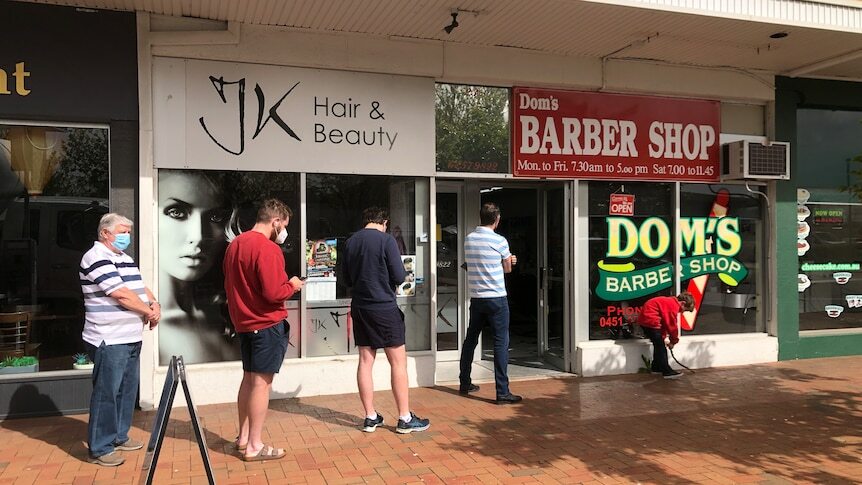 The ACT has recorded 35 new COVID-19 cases, as the territory emerges from a nine-week lockdown.

There has also been another death in the Calvary Haydon aged care facility — a woman in her 70s, who is the seventh person to die in that cluster.

This brings the total number of deaths during the ACT's current outbreak to eight.

There are 16 people in hospital with the virus, including eight people in intensive care.

More than 99 per cent of the eligible population in Canberra has now received one dose of a COVID-19 vaccine.

The territory entered a snap lockdown on August 12, after recording its first known case of the Delta variant in the community.

The measure was extended twice and, after nine weeks, stay-at-home orders lifted today, allowing businesses to reopen and workers to return to the office.

ACT Chief Minister Andrew Barr said the government's focus will now shift from case numbers, to the number of hospitalisations.

"A potential concern for us would be if fully vaccinated people were finding themselves in hospital or intensive care, but the evidence so far is that the vaccines have been working to reduce the proportion of cases that require hospitalisation or intensive care," he said.

From Friday, The ACT government opened travel to 27 places within the ACT's border bubble with NSW for approved reasons like household visits, to access childcare or school, to attend a wedding or a funeral, and to work.

The border bubble was expanded earlier this week to include more communities — among them Cooma, Goulburn, Braidwood, Bombala and Jugiong.

NSW residents of those border postcodes can also enter the ACT without an exemption.

This morning, NSW Cross Border Commissioner James McTavish reminded Canberrans that under the ACT Health standing exemption, people should only be travelling into the region for one of the 12 essential purposes.

"I'd note that under the ACT rules you shouldn't really be travelling unless you're going for a prescribed purpose," he told ABC Radio Canberra.

"And those prescribed purposes are listed on the ACT website."

However, he said that after that prescribed purpose has been achieved, "in NSW you can do whatever you like".

"For example if you go across to catch up with some friends at their residence, then you can go and do other activities including go to the pub if you're fully vaccinated," he said.

"If you're an ACT resident, the reasons that you can go over the border include visiting another household, school, work, etcetera etcetera," he said

"But what we can do is put in place some guidance for people around what the reasons for crossing the border would be."

Mr Barr reinforced that crossing the border for the sole purpose of going to the pub was not an approved reason for travel.

"Most of this [border travel] is around trust. But I don't want people to think that there won't be any enforcement, that there isn't a chance that they’ll get caught — because there is."

November 1 is the date to watch

While NSW's rules permit Canberrans to travel throughout regional NSW without an exemption from Friday, ACT residents who venture out of the border bubble region will still need to apply for an exemption before returning home, and quarantine for 14 days.

Mr Barr indicated "there won't be a change to that today".

Travel from the ACT into Greater Sydney will also not be allowed until November 1, at the earliest.

"As to when Canberrans can travel to Sydney — not before the first of November is the answer on that question, as it relates to regional NSW beyond the 27 postcodes that are currently within the Canberran region standing exemption," Mr Barr said.

"What NSW have announced today is that they're going to drop that Greater Sydney bubble or protection, from the first of November.

"So we will align with NSW — the exact nature of the changes we will work through, but that's the direction that we are heading."

This morning the NSW government announced they would remove caps on international travel for those who have been fully vaccinated from November 1.

People landing in Sydney from overseas will need to show proof that they have received a TGA-approved vaccine, and must return a negative COVID-19 test before boarding their flight.

Mr Barr said it was unlikely Canberra airport would receive international arrivals in the near future.

"It's not a particularly pertinent issue in the ACT because we have no expectation of direct international flights into Canberra in the next few weeks or months," he said.

"The really outstanding issue that we will need to resolve with NSW will be what are the transit arrangements for people once they have landed in Sydney."

Mr Barr said he expects transit arrangements could be in play from November 1, when the greater Sydney restrictions change.

"That's the likely date. It won't be before that," he said.