Across the Brooklyn Bridge and back: Remembering 9/11, the day that changed everything 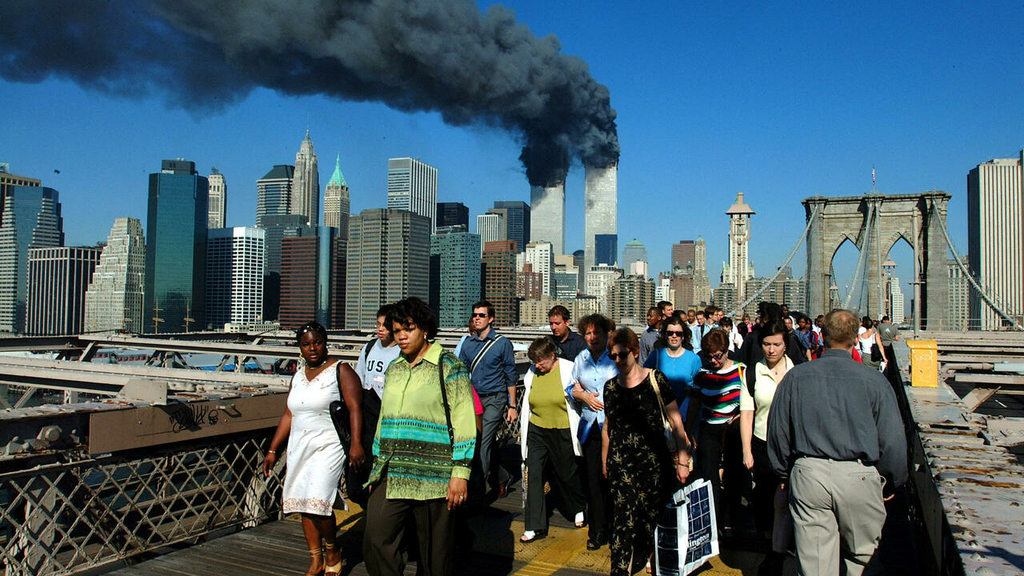 It started out as a beautiful fall day. By the end of it, nearly 3,000 Americans were dead, and countless more traumatised by what they lived through. Three New Yorkers speak to FRANCE 24 about how September 11, 2001 changed their lives, and the world, forever.

For years, walking across the Brooklyn Bridge was part of Bob Weston’s daily routine.

He lived at the foot of the bridge in downtown Brooklyn, and worked in lower Manhattan, about ten minutes north of the World Trade Center. So, “to save money and get some exercise”, he would walk back and forth over the bridge to get to work.

September 11, 2001 started like many of those days, he recalls, although it was an especially warm, sunny fall day, and he had started a little earlier than usual in order to vote in the city’s primary elections. He was about three-quarters of the way across the bridge when he noticed something was off.

“Out of the corner of my eye, I saw a plane, and it just didn’t make sense,” Weston tells FRANCE 24. “It was too low. And going too fast. And it was just too big. I watched it for several seconds, and it was just going across the skyline, and then it hit the North Tower of the Trade Center.”

Weston did not just see the crash. He felt it.

“When the plane hit the tower, the explosion was massive,” he says. “It felt like a wave that just went through me… I’ve never experienced anything like it.”

At that moment, traffic on the bridge stopped, and Weston turned to the few other onlookers who had seen what he had seen.

“At that point in time, we all thought what we had seen was just a horrible, horrible accident,” he says. But then, “I heard somebody scream, and we all looked up just to see the second plane hitting the South Tower. And we all realised that this was not an accident. We were under attack.”

Weston felt the impact again, this time as a “huge fireball” burst from the tower and a wave of heat rippled towards the bridge, as if someone had opened an oven in front of them. Panic began to set in. But rather than go back across the bridge — which a nearby police officer warned could be the next target — he ran towards the flames.

Weston passed pieces of plane wreckage and shocked bystanders before arriving at his office, only to find his colleagues rushing out. As he fled north, he heard a rumble, “like a train”, and felt the ground shaking as the towers collapsed.

“I couldn’t believe what I was seeing. Because as a kid growing up in Brooklyn, I remember watching the Trade Center towers be built,” he said. “The thought of one of them coming down was just unimaginable to me.”

He made his way across residential neighbourhoods, where he felt he would be safest, before eventually crossing back into Brooklyn over the more distant Williamsburg Bridge.

When Weston finally got home, he was met by tens of thousands of people streaming across the bridge where his day had begun. Altogether, some 500,000 people fled Manhattan over the Brooklyn Bridge in a matter of just hours. Others jumped into the East River to try to swim across.

“I’ll never forget, it’s just masses and masses of people walking over the bridge into Brooklyn, and thousands of them are just covered head to foot in that greyish, whitish dust,” he says. “Some people in my building got plastic cups, and we grabbed any water jugs we could, and we’re trying to give people some water. But it was tens of thousands of people, and there was only so much you could do.”

Lila Nordstrom was even closer to the World Trade Center when the planes struck. She was a 17-year-old student at Stuyvesant High School, just blocks from the towers.

“We watched the entire thing falling from the classroom window,” she tells FRANCE 24. It wasn’t until after that point, more than an hour after the first tower was hit, that an announcement came over the loudspeaker ordering the school’s more than 3,000 students to evacuate immediately.

“The doors opened and we just ran,” Nordstrom tells FRANCE 24. The students weren’t escorted or told where to go, she said, except that they should get away from lower Manhattan.

“The whole area was just dust,” she says. So they fled north and ultimately towards Queens, even though her family lived in Manhattan; they had heard rumours that the borough was to be entirely evacuated. She stayed with a friend and did not see her parents until the next day.

“It looked like a movie,” she says, of watching the towers fall. “It doesn’t look like a real thing that’s happening to you. You don’t really have any way of fully understanding how big it is.”

Like Bob Weston, the first thing Laurent Auffret recalls about September 11, 2001, is how spectacular the weather was — “without a cloud in the sky”. He was already at work, in the French Consulate building on Manhattan’s Upper East Side, when the planes hit, and like so many across the country, found out about the attacks on television.

When he first left the office, there were still joggers in Central Park, and the air was clear of smoke. As he made his way downtown, though, to get home to Brooklyn, the grim reality began to set in.

“From 42nd street down, there were no more cars,” he says. “We started to walk down the middle of the avenues, and we started to see the big, thick, black cloud coming from Ground Zero.”

“Downtown, there was dust everywhere, sirens, people running,” Auffret continues. “Once I reached the Brooklyn Bridge, I saw the huge cloud spreading across that spectacular blue sky towards Carroll Gardens, where I lived.”

The effect was eerie. “There was a beautiful light, no more cars, it was silent,” he said. “The people I met were in shock. Some were screaming, others were crying and holding their arms up to the sky as the ashes were falling.”

‘Burned into my brain’

Twenty years later, the memories of that day are as vivid as ever for all three New Yorkers.

“The image of the first plane hitting the North Tower is just burned into my brain,” says Weston, 59. He now works part time as a tour guide, telling middle and high school students about what he lived through that day. No matter how many times he tells the story, “it’s painful”.

“Over time, it’s less, but it still hurts and it’s disturbing,” Weston says. When the anniversary comes around, he tries to block it out. “I don’t watch TV that day, and I make sure that I’ve got lots of projects to do and keep myself busy.”

Nordstrom still feels the effects of that day, too — not only psychologically, but physically.

When her high school reopened a month after the attacks, she and her classmates were exposed to toxic dust from the ruins of the World Trade Center. Several of her classmates fell ill, and in 2006 she founded an organisation, StuyHealth, to seek recognition of several illnesses related to the 9/11 attacks and cleanup of the site.

“The federal government considers me a 9/11 ‘survivor’”, Nordstrom recently wrote in the Washington Post. “I’m certified as having four 9/11-related conditions, fortunately none are cancer. Many of my classmates have not been as lucky. A few have died, all before age 35.”

Nordstrom has dedicated most of her adult life to advocating for survivors like herself, who over the last twenty years have filed some 67,000 health claims, nearly half of them involving cancer. She wishes they hadn’t had to shoulder that additional burden.

“It’s well past time our federal institutions figured out how to care for their own without asking traumatized, disenfranchised Americans to do that work for them,” Nordstrom wrote.

The French-born Auffret, who has lived in New York since 1998, is saddened to have seen the unique cosmopolitanism of the “world city” recede after 9/11, as it was overtaken by a vengeful nationalism.

“New York became American that day,” says Auffret, 52. “The very next day, in my neighbourhood, there were American flags everywhere. Before, I had only seen them on July 4, for Independence Day.”

“I understood that America wanted retaliation,” he adds. “Everything changed profoundly, and for me, the memory of that day is one of having witnessed a defining moment in history.”