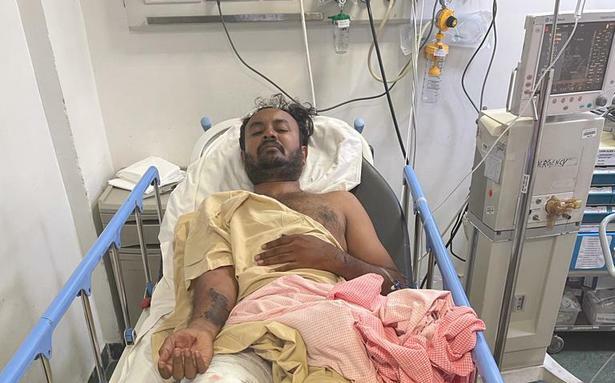 The Hindu
Acid attacker arrested from Tamil Nadu after 16 days

The victim suffered 30% burns and is recovering in hospital

The acid attacker Nagesh Babu, who threw acid at the 25-year-old girl who spurned his overtures on April 28, had contemplated throwing acid at her in 2020 itself, but did not attack her then.

“Nagesh Babu knew the victim for seven years and had been making repeated overtures to her that she had been consistently rejecting. Our investigations revealed that he had stalked her for years, without her knowledge. Not only that, the probe revealed that he had contemplated throwing acid at her in 2020 itself. He had procured acid then but did not carry out the crime,” said Police Commissioner Kamal Pant.

Investigations have now revealed that the attack was well-planned and executed in cold blood, with adequate preparation for the attacker to flee as well.

“He was earlier employed in a housekeeping company. He misused the letterhead of that company and mailed a lab supplying acid to clean solar panels to procure the acid. He procured a can of 8 litres, and two cans of 0.5 litres as a sample on April 20. He had procured acid through the same means and by misusing the company’s letterhead in 2020 tool. He said he did not carry out the attack then because he loved her and felt bad harming her,” Mr. Pant said at a press conference on Saturday.

The victim had informed her family of Nagesh following her and repeatedly pestering her to marry him. The victim’s family had informed Nagesh’s brother who had taken him to task. This prompted him to get the acid to attack her. A day before the attack, he went to her workplace and again pestered her to marry him, when she reportedly firmly rejected his overtures saying he was like a brother to her. The manager at her workplace intervened and removed him from the premises.

The next morning, when she came to work, he followed her and splashed her with half a litre of acid. On April 28, Nagesh went to Hosakote, and called and informed his family and friends about the incident. They advised him to surrender before the police. He spoke to two lawyers seeking anticipatory bail, but they too advised him to surrender. “Nagesh claimed he was overcome by remorse for harming the girl and tried to take his own life by jumping into a lake, but couldn’t. He claimed he wanted to repent for his deed and took a bus to Tiruvannamalai and checked into Sri Ramanasramam, as he had heard that people go to the ashram to repent for their sins,” Mr. Pant said.

Before leaving Hoskote, he abandoned his mobile phone and bike and later went completely incommunicado, making tracking him down a challenge.

Knowing his spiritual bent of mind, the police suspected that he would have gone to a temple town and concentrated their efforts in temple towns across the country. “During our investigations in Tiruvannamalai, a member of the public, seeing his photo from the poster we had distributed, said he had seen someone like him at the ashram. He clicked a photo and sent to us. We confirmed it was him. A burn injury on his hand also helped with the identification. A police team rushed to the ashram and found him in saffron robes meditating. After confirmation of his identity, he was arrested,” Mr. Pant said.

(Those in distress or those having suicidal tendencies can call Arogya Sahayavani Ph.: 104 for help.)

The Hindu
Acid attacker arrested from Tamil Nadu after 16 days

The victim suffered 30% burns and is recovering in hospital