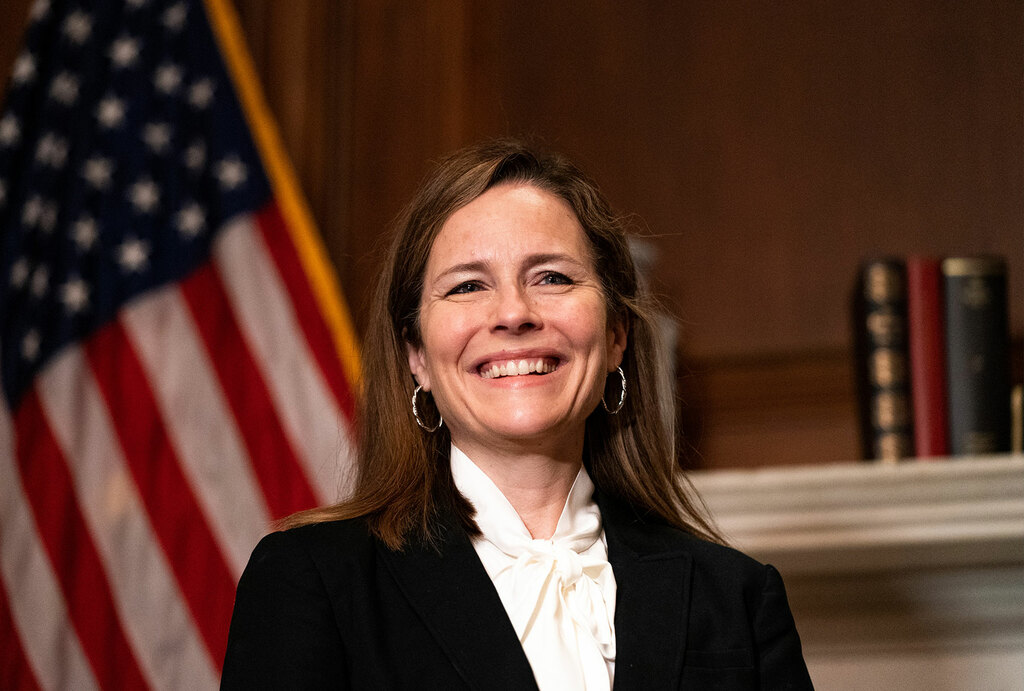 Supreme Court Justice Amy Coney Barrett disputed the idea that the court's decisions are swayed by political biases, claiming that her colleagues are not "a bunch of partisan hacks."

"Judicial philosophies are not the same as political parties," Barrett said during a Sunday speech at the University of Louisville's McConnell Center, named after Kentucky's senior Republican senator, Mitch McConnell, who notoriously blocked Barack Obama's final pick for the court, Merrick Garland, from even getting a Senate hearing. "It's not my job to decide cases based on the outcome I want," Barrett said.

Barrett's speech, reported by the Louisville Courier-Journal, comes just after the Supreme Court handed down two controversial rulings. Earlier this month, the the court upheld a Texas ban on abortion past six weeks into pregnancy, effectively sinking the 40-year precedent established by Roe v. Wade – which 48 years ago granted women a constitutional right to an abortion. The court also officially axed President Biden's eviction moratorium, a lifeline for renters struggling financially amid the pandemic.

During her speech, Barrett attempted to delineate apparently valid criticisms of the court from accusations of partisan bias.

"To say the court's reasoning is flawed is different from saying the court is acting in a partisan manner," she said. "I think we need to evaluate what the court is doing on its own terms."

"The media, along with hot takes on Twitter, report the results and decisions…that makes the decision seem results-oriented. It leaves the reader to judge whether the court was right or wrong, based on whether she liked the results of the decision," Barrett added.

Barrett was appointed by Donald Trump last year shortly after the late Justice Ruth Bader Ginsburg passed – a move that liberals decried as overtly partisan because it went against the tradition of delaying appointments until after the election year is over. Back in 2016, McConnell blocked Obama's nominee to fill the vacancy left by the death of Justice Antonin Scalia. Barrett, like Scalia, is a so-called "originalist," meaning that she believes the Constitution should be interpreted as it was written by its founders. She is also a devout Catholic, in the past speaking against abortion and ruling against LGBTQ+ interests.

During her appearance at the McConnell Center, Barrett was later asked about a number of her conservative rulings, including her abortion "shadow docket" ruling in Texas, as well as her reinstatement of Trump's "Remain in Mexico" immigration policy, according to Politico. But Barrett demurred, claiming it would be "inappropriate" to comment on the specifics of any cases.

She described herself as just one of millions of Americans. "I have an important job," she said, "but I certainly am no more important than anyone else in the grocery store checkout line."

Asked about advice to women looking to pursue roles in public service, she said that raising a family and pursuing such a career are not mutually exclusive.