Former prime minister Tony Abbott has lent his support to controversial Liberal Warringah candidate Katherine Deves, urging party members to get behind her.

“The more I see of Katherine Deves, the more impressed I am with her courage, with her commonsense, with her decency and with, quite frankly, her capacity to win this seat back for the Liberal Party,” he said in the video.

“Whatever faults we might see in the selection process, we’ve got to do this, to get behind her for our community, for our party, for our country.”

While she initially apologised for the comments, earlier this week she walked back the apology saying mutilation was the “correct medico-legal term”.

Mr Abbott, who lost Warringah to independent candidate Zali Steggall at the 2019 election, told party members to stand by the Liberal candidate in the wake of her controversial comments.

“I really do urge all Warringah Liberals to get behind our candidate,” he said.

“She is our candidate, she’s doing a good job and she deserves to be supported.”

Ms Deves was a captain’s pick for the once blue-ribbon seat of Warringah by Prime Minister Scott Morrison, who has fended off questions throughout the election campaign about Ms Deves’s views.

On Thursday, Bass MP Bridget Archer, who appeared alongside the prime minister on the campaign trail, was asked about Ms Deves’s comments in light of a mental health announcement.

She told reporters in northern Tasmania that people should be treated with respect.

“When we’re talking about people, whoever they might be, we should seek to do that in a way that is respectful and is not damaging to people’s mental health,” she said.

Earlier this week, the prime minister stood by Ms Deves, indicating her election would be a chance for more women in parliament,

“Not everybody may agree with her point of view,” Mr Morrison said.

“I was very determined to ensure that I would have more female members representing the Liberal Party at this election and where I’ve had the opportunity to have a direct say in that, I have ensured that that has been delivered and that is consistent with my approach.” 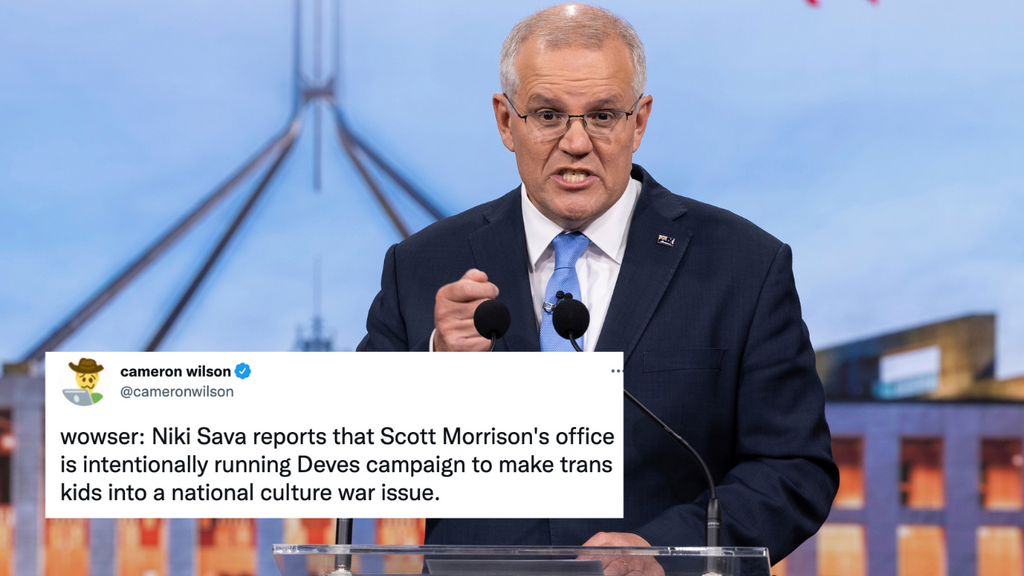 Pedestrian.tv
One subscription that gives you access to news from hundreds of sites
PM backs Deves over trans comments

The Prime Minister has backed in a controversial candidate over anti trans comments.

It’s been another difficult day for the government, battling bad polling, infighting, and gaffes from key MPs.