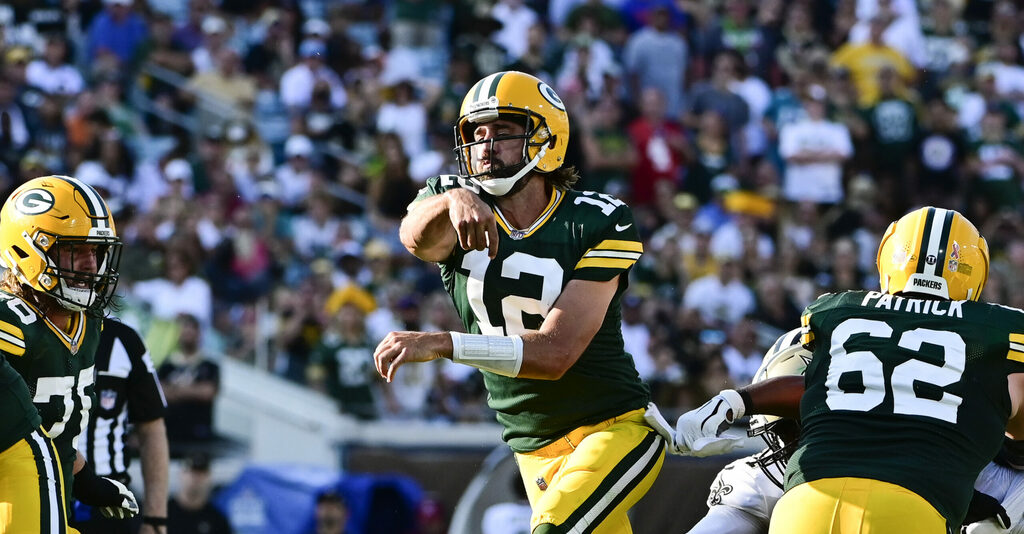 Aaron Rodgers went into Sunday’s Week 1 opener against the Saints coming off an MVP season and an offseason full of drama. And if this season is really supposed to be a “Last Dance” for Rodgers in Green Bay, it didn’t get off to a great start.

Rodgers put together one of his worst-ever performances on Sunday in Jacksonville (a relocated Saints home game). He was just 15 of 28 for 133 yards, no touchdowns and threw a pair of interceptions — one of which took place in the red zone.

But there was apparently a reason — a very painful reason — why that throw was so behind wide receiver Davante Adams. Rodgers explained what happened in Tuesday’s appearance on The Pat McAfee Show. (Warning: NSFW language)

"There's some interceptions you want back.. some that aren't your fault.. but the first one on Sunday was entirely due to the DOUBLE nut shot I took" 😂😂 @AaronRodgers12#PatMcAfeeShowLIVE pic.twitter.com/Itef4xBPTe

Aaron Rodgers to @PatMcAfeeShow on his first INT on Sunday: "For those of you who went back and watched it… I don't like to make a lot of excuses for interceptions… That was entirely due to the double nut shot I took." 🤣

Rodgers said that he took two shots to the groin right before he was about to throw to Adams, which obviously had him a bit rattled on the play. Here’s a look at that interception:

So far, Winston has thrown 0 INTs, Payton coached him up well.pic.twitter.com/08uUbrsPbt

“I guess I gotta overcome that and throw a better ball,” Rodgers joked after giving the explanation for the play. “That was a painful one. They got their money’s worth on that one.”

Good luck with that, Aaron.