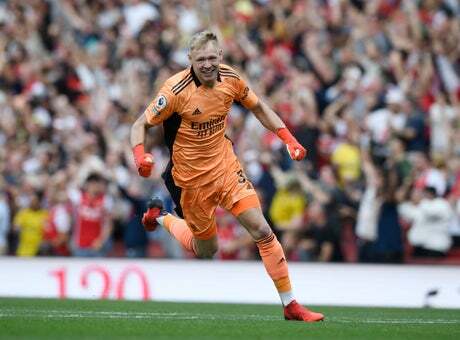 Aaron Ramsdale is unsure if he will keep his place in goal for Arsenal’s trip to Burnley on Saturday, but says he is relishing the fight with Bernd Leno to be the club’s No1.

Goalkeeper Ramsdale, who joined Arsenal this summer from Sheffield United for £24million, made his home debut for the Gunners on Saturday as they beat Norwich 1-0.

The victory, which was secured courtesy of Pierre-Emerick Aubameyang’s second-half goal, was Arsenal’s first in the Premier League this season and lifted them off the bottom of the table and out of the relegation places.

Next up Arsenal face a trip to Burnley this weekend and Ramsdale will be vying with Leno in training this week to prove he should keep his place.

“I don’t know what the manager is going to do,” said the 23-year-old. “This [game against Norwich] might have just been a tactical tweak, so it is my responsibility to force him to carry on picking me, which is something I have to do on a daily basis.

“Me and Bernd will be very competitive in a good way, healthy and hopefully I can stay in the team.

“You have got to be ready to play as a goalkeeper. You don’t know when anything is going to happen. I’m ready every week.

“So now we have got to continue the competitiveness on the training ground and I’ve got to try and stay in the team and help them. There is a lot to carry on going and we will see where it takes us this season.”

Ramsdale was one of five summer signings to start the win over Norwich, with left-back Nuno Tavares the only new recruit to miss out.

Arteta has been desperate to get his new arrivals on the pitch as he looks to turn around Arsenal’s miserable start to the season.

Prior to Saturday’s win, Arsenal had failed to score a goal or claim a single point in the Premier League after a run of opening games that culminated in a 5-0 loss at Manchester City.

“You just want to hit yourself because you are not doing things right and you are not getting the outcome you think you deserve,” said Arteta.

“And what I did probably was against myself because you are upset with yourself, you are angry, you are tired.

“You have to understand why you do it. So after the loss against City, probably I was at the lowest.

“And then you start to try analyse things, you hear different opinions - media, what you think, criticism - and then probably you go even further.

“And then starts the importance of having the family I have, the wife and kids I have, the parents and the friends I have.”

It was clear Saturday’s win meant a lot to Arteta, who was open and honest about how the pressure of managing a club like Arsenal can impact a person away from the pitch.

“That’s why when you see your kids running around you and your wife trying to just change the topic and see everything from a different perspective, it’s so helpful,” the Spaniard explained.

“That negativity has to come away. You have to bear in mind that first of all you are doing everything you can to your best capacity, and don’t kid yourself or look for excuses.

“Normally the easiest thing to do is blame the players: ‘They are not good enough, I have this. I have that’ and then you try to over coach them.