Adani got assets at 3 airports for a song, says AAI union 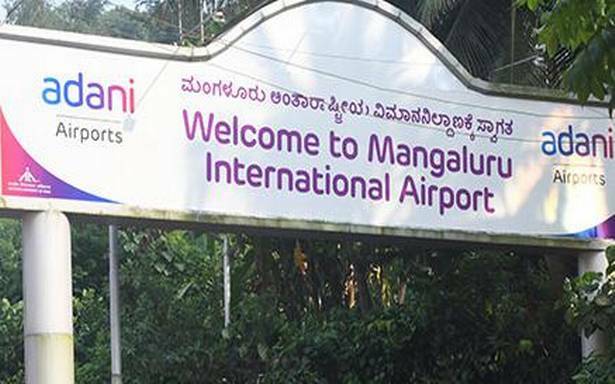 The Airports Authority of India’s (AAI) aeronautical and non-aeronautical assets at three airports that were taken over by the Adani group, were transferred at a fraction of earlier estimates, the Authority’s employee union has alleged.

In an open letter to Prime Minister Narendra Modi on October 2, the Airports Authority Employees’ Union has highlighted that assets valued at ₹1,300 crore at the time the Ministry of Civil Aviation had sought approval from the government’s Public Private Partnership Appraisal Committee (PPPAC), were sold to Adani Enterprises Limited (AEL) for a mere ₹500 crore when it took over the Mangaluru, Lucknow, Ahmedabad airports last year.

A total of six airports were opened for privatisation by the AAI in December 2018, and AEL was declared the highest bidder for all of them in February 2019. Of these, three have been transferred to the AEL. The remaining three are likely to be handed over this month after the latter sought an extension citing force majeure clause due to COVID-19.

The allegations come at a time the AAI reported losses last fiscal for the first time since its inception — it incurred a loss of ₹2,814 crore as compared to a profit of ₹1,985 crore in financial year 2020 — leading it to enforce a pay cut for its employees for a period of six months in July.

According to contracts signed between Adani Enterprises and the AAI for airports in Mangaluru, Lucknow, Ahmedabad in February 2020, the latter had to pay ₹74.5 crore, ₹147 crore and ₹277 crore for aeronautical and non-aeronautical assets at the three airports respectively. These assets constitute the regulatory assets base and the amount had to be paid within 90 days of commercial operation date.

However, when these figures are compared with estimates prepared by the Ministry of Civil Aviation in its proposal before the PPPAC, they amount to a deficit of 80% for Mangaluru airport, 75% for Lucknow and 28% for Ahmedabad.

According to the Record of Discussion of 85th meeting of PPPAC held on December 11, 2018, these properties were pegged at ₹363 crore at Mangaluru airport, ₹583 crore at Lucknow airport and ₹384 crore at Ahmedabad airport.

The Hindu has verified the figures cited in the three contracts and the PPPAC document.

Responding to emailed queries, the Adani Group said it met the terms laid down in the bid document for privatisation of six airports.

“As per bid documents given to all bidders, the Concessionaire was required to pay the amount of investments made by AAI as on 31.3.2018, which was predefined in the respective Concession Agreement,” a spokesperson for the Adani Group said.

These costs have been paid by Adani, the spokesperson said.

In addition, the Concessionaire was also required to reimburse additional expenses incurred by the AAI for the work undertaken after March 31, 2018, until the date of the takeover. It was not clear from the response whether this had been paid by AEL.

General Secretary of AAEU, B.S. Ahlawat, told The Hindu, “In a growing business, how is it that the value of assets depreciated between 2018 and 2020? We would like to know if the government helped Adani by bringing down the costs.”

Several questions have been raised in the past about the Adani deal. The Hindu reported in July 2019 that the PPPAC headed by then Secretary, Economic Affairs, Subhash Chandra Garg, brushed aside several key suggestions made by the Finance Ministry and NITI Aayog, which effectively led to Adani winning all six airports. These included a cap on the number of airports that could be bagged by the same entity and the requirement of prior experience in operation and management.

The employees’ union has also raised these points in its letter and demanded that the PM order a stay on the transfer of the remaining three airports as well as a judicial inquiry into the privatisation process.

S.C. Garg, who resigned from the government after being shunted out as Secretary of Finance Ministry to Power Ministry, told The Hindu, “The decisions were taken by the PPPAC. I was the Chair of that Committee and I stand by those decisions, but the decisions were not mine alone. They were unanimous decisions of the entire Committee, which also included the Joint Secretary of Department of Economic Affairs and the NITI Aayog Advisor, who made the suggestions (being referred to) and both signed on the decisions. Their suggestions were in the nature of initial observations, but finally even those two members were part of the decision taken by the PPPAC.”