A trans Netflix employee spoke out against Dave Chappelle’s comedy special. Days later, she was suspended. 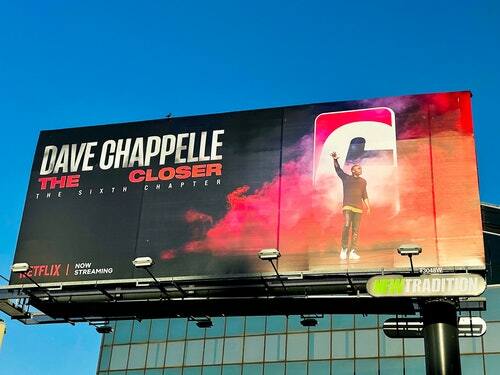 Amid the swirl of controversy around Dave Chappelle’s recent Netflix stand-up special The Closer, which — along with his other specials in recent years — has been widely criticized for being transphobic, the streaming service recently suspended three of its employees, one of whom is a trans software engineer. Terra Field and two others were ostensibly suspended after attempting to attend a “director-level meeting,” though the disciplinary move also comes after Field’s vocal condemnation of The Closer, Chappelle’s final entry in a multi-special deal with Netflix.

Following the show’s premiere last week, Field tweeted, in a thread that went viral, about the violent discrimination toward trans people that Chappelle’s special, which included him vocally referring to himself as “Team TERF” (a term used to mean trans exclusionary radical feminist), contributes to. The thread included the names of the literally dozens of trans people who have been murdered throughout this year alone. Netflix has denied that it suspended Field for the tweets, while also standing by the special, despite many (including, in an open Q&A document, Netflix’s own employees) claiming that it crosses the line of artistically pushing the envelope and that it instead plainly promotes hate. Netflix did not immediately respond to a request for comment for this story.

In an internal company email, Netflix’s CEO Ted Sarandos stood by the show and stated that it would not be removed standing by a defense of “creative freedom” and the streamer’s “commitment to inclusion” seen in its other titles. Aside from his statement, the idea of the special getting pulled, as some groups have called for, would never have happened — there is simply too much money, contractual obligations, and long-term risk of a precedent being set that Netflix would never dare to jeopardize or deal with.

“Several of you have also asked where we draw the line on hate,” Sarandos wrote. “We don’t allow titles on Netflix that are designed to incite hate or violence, and we don’t believe The Closer crosses that line. I recognize, however, that distinguishing between commentary and harm is hard, especially with stand-up comedy, which exists to push boundaries.” Chappelle may not have explicitly or consciously designed an entire special to result in discriminatory hate or violence, but that is nevertheless the consequence for a community that is perpetually living in threat of harassment and violence.

Field, for one, has spoken about the transphobic hate she has received as a result of her public criticism of the show. “It never feels good when people are hurting, especially our colleagues,” Sarandos wrote in the email. And yet the streamer has no problem, in fact, punishing its employees rather than protecting them. Meanwhile, the controversy is further promoting the show — something that the comedian knows full and well — and Chappelle, a multimillionaire who just came off of a highly successful six-special run with the biggest streaming company in the world, is publicly basking in the lie that he, a subversive hero of comedy, is being cancelled.