A Strategy of Confusion 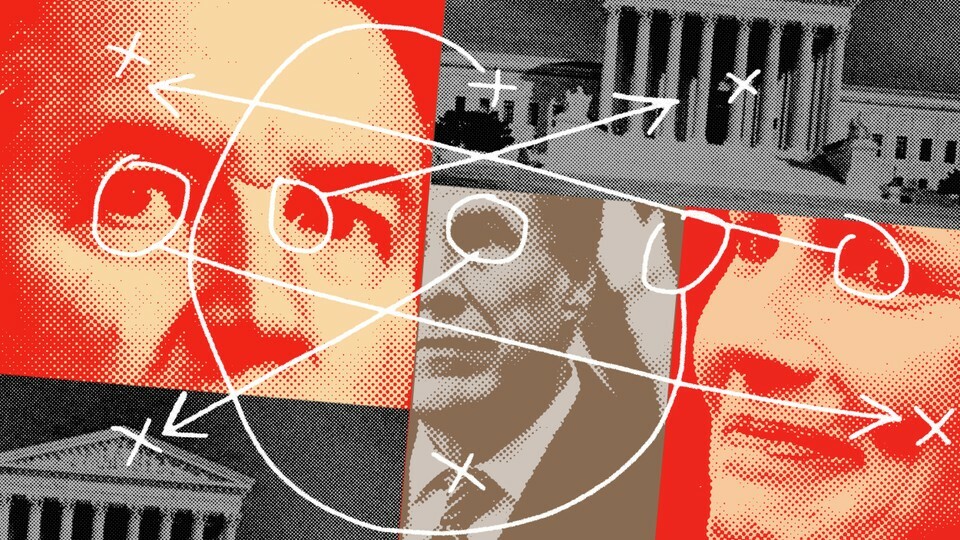 On the verge of a landmark victory by judicial fiat, the Republican Party is being strangely quiet.

As my colleague David Graham has written, Republican Party leaders and conservative intellectuals haven’t been trumpeting the Supreme Court’s decision to allow a Texas ban on abortions to go forward, which for women in the state has all but nullified the 1973 Roe v. Wade decision that guaranteed the right to an abortion. Instead, in a show of formidable message discipline, they’ve been downplaying it. High-ranking Republican politicians have avoided commenting, or described the Court’s decision in technical terms. Conservative intellectuals and media figures, meanwhile, have sought to cast the decision as a procedural matter of minor significance.

The Texas law bans abortion around six weeks, before most women know they are pregnant. It promises a $10,000 reward to anyone who successfully sues someone who “aids or abets” a person trying to get an abortion after that time—or “intends” to do so—which not only deputizes Texans to snitch on one another in the hopes of getting a cash prize, but creates a litigation risk that its proponents hope will put abortion clinics out of business forever.

In response to appeals from abortion providers, the Court issued a 5–4 decision through its shadow docket in which the majority insisted that the structure of the Texas law raised “complex and novel” procedural questions the justices weren’t prepared to address. Other Republican-run states are now promising to follow Texas’s example. Although the Roe decision hasn’t been officially overturned, a legal landscape in which states pass abortion bans that the Supreme Court pretends to be powerless to address is one in which the decision has no legal force.

[Adam Serwer: Five justices did this because they could]

The idea that all of this is a procedural matter of trivial significance is nonsense—the architects of the Texas law deliberately designed it to evade judicial review, and its defenders are essentially repeating an anti-abortion group’s legal strategy as analysis. If a Democratic-run state passed a law that nullified a constitutional right by some clever legal scheme, conservative writers and personalities would not be praising its cleverness and insisting that the Court was correct to feign helplessness. Nor would the conservative justices have taken as kindly to an effort to make them look like hapless fools, were they not so sympathetic to the results.

“If this were New York passing a law creating a private right for citizens to sue someone for having a gun, the Court would step in in a heartbeat,” Adam Winkler, a law professor at UCLA, told me. “I don't think there's any doubt that the Court’s decison to allow Texas’s law to stand was a reflection of the justices’ belief that abortion is not a constitutionally protected right.”

The notion that no harm was done here is risible—it is simply that the Texas law’s defenders are pleased with the outcome. Patients are already being turned away from clinics; those with the means to do so are going to other states for treatment, even though it is unclear whether the law allows the people who help them to be sued regardless.

The Court’s supposedly narrow ruling also dissuades abortion providers from setting up a legal challenge to a law that is plainly unconstitutional under current precedent. These providers could just keep providing services and wait to be sued—mooting the weak procedural rationale on which the current majority opinion relies. But now that a majority of the Court has indicated that it no longer considers abortion a constitutional right, doing so would risk validating the Texas law rather than overturning it.

“The Court's pretense that it's not sure it could do anything … is akin to someone pretending they're locked in a room while they themselves are holding the key all along,” Aderson Francois, a law professor at Georgetown University, told me. “It seems to me we've reached a point where we don't have to pretend that the Court is intellectually honest. It's not.”

The Texas law’s critics have seized on its perverse social incentive—bribing Texans to inform on one another—as potentially creating a nightmare scenario, a kind of privatized surveillance state. But if no one ever sued, the law might avoid challenge and still achieve its objective, with the added reward of the law’s supporters being able to again characterize its critics as hysterical for accurately describing their means and ends. Of course, once you deputize the citizenry to seek bounties on one another, you can’t control who takes you up on the offer.

The point of hiding behind proceduralism is to minimize political backlash by drawing muddled coverage of the decision. As Irin Carmon writes at New York magazine, the justices have “decided to confuse us with process.” Their political allies in the Republican establishment got the message, and are dutifully repeating it.

[Mary Ziegler: The justices are telling us what they think about Roe v. Wade]

This does not mean that Republicans are necessarily fearful of the political consequences of overturning Roe. The long-term Republican strategy—as opposed to that of the anti-abortion movement—has always involved cultivating a degree of uncertainty about the party’s objectives in order to minimize the political backlash. Few Americans support allowing abortions with no restrictions, but even fewer support outlawing the procedure entirely.

In that environment, the Republican Party has pursued a balancing act—harnessing the commitment and passion of the anti-abortion movement while assuring centrist voters of a more moderate approach. The Trump era showed how easily media standards toward fairness could be manipulated to maximize uncertainty, and leave the public confused about the significance of any given development.

As Laura Bassett wrote last week, Republican politicians have repeatedly insisted that their nominees to the bench would not seek to overturn Roe, and characterized critics as paranoid. Both Justice Brett Kavanaugh and Justice Amy Coney Barrett, whose defenders insisted that they were agnostic on the question, were in the majority last week. But the charade goes back decades. During his confirmation hearings, Justice Clarence Thomas insisted, “No judge worth his or her salt will prejudge a case,” and then he called Roe “plainly wrong” after less than a year on the bench. Donald Trump, with his characteristic subtlety, simply said that his appointees would overturn Roe, and they’ve given Americans little reason to believe otherwise.

An upcoming case before the Court offers the justices the opportunity to overturn Roe formally, rather than by increment. Even if they do so, I am skeptical that a massive political backlash is necessarily in the offing—the era of social media has amplified the ability of committed propagandists to confuse masses of people about what is happening in their own country. The muddled media reaction to this ruling is a case in point.

Nor does the logical extension of the majority’s decision, that the entire Constitution can be nullified by states outsourcing enforcement of unconstitutional laws to private actors, mean that blue states will prevail if they, say, adopted a similar scheme to curtail gun rights. But the Republican appointees now have a majority even when they lose the vote of Chief Justice John Roberts, whose commitment to managing the Court’s reputation has occasionally placed him on the side of the Democratic-appointed justices. The conservative justices don’t fear the nullification of rights they recognize, because they know they have the power to do whatever they want.

On Thursday, as the Justice Department filed suit to block the law, Attorney General Merrick Garland argued that “this kind of scheme to nullify the Constitution of the United States is one that all Americans—whatever their politics or party—should fear.” Under different circumstances, that would be true. It should be true.

[Laura Bassett: All of those ‘hysterical’ women were right]

But the superficial proceduralism and ideological fanaticism of the Court’s unaccountable majority enable the conservative justices to allow what they want and bar what they don’t, while claiming that some legal technicality has dictated the result.

The Court’s approach is ideal for hiding a radical result behind a veneer of propriety. But there’s no need for the public to be confused about what’s happening here.