Blame for Beirut Explosion Begins With a Leaky, Troubled Ship

By Declan Walsh and Andrew Higgins

CAIRO — The countdown to catastrophe in Beirut started six years ago when a troubled, Russian-leased cargo ship made an unscheduled stop at the city’s port.

The ship was trailed by debts, crewed by disgruntled sailors and dogged by a small hole in its hull that meant water had to be constantly pumped out. And it carried a volatile cargo: more than 2,000 tons of ammonium nitrate, a combustible material used to make fertilizers — and bombs — that was destined for Mozambique.

The ship, the Rhosus, never made it. Embroiled in a financial and diplomatic dispute, it was abandoned by the Russian businessman who had leased it. And the ammonium nitrate was transferred to a dockside warehouse in Beirut, where it would languish for years, until Tuesday, when Lebanese officials said it exploded, sending a shock wave that killed more than 130 people and wounded another 5,000.

The story of the ship and its deadly cargo, which emerged Wednesday in accounts from Lebanon, Russia and Ukraine, offered a bleak tale about how legal battles, financial wrangling and, apparently, chronic negligence set the stage for a horrific accident that devastated one of the Middle East’s most fondly regarded cities.

“I was horrified,” said Boris Prokoshev, the ship’s 70-year-old retired Russian captain, about the accident, speaking in a phone interview from Sochi, Russia, a Black Sea resort town just up the coast from where the ammonium nitrate began its journey to Beirut in 2013.

In Lebanon, public rage focused on the negligence of the authorities, who were aware of the danger posed by the storage of 2,750 tons of ammonium nitrate in a warehouse on the Beirut docks yet failed to act.

Senior customs officials wrote to the Lebanese courts at least six times from 2014 to 2017, seeking guidance on how to dispose of the ammonium nitrate, according to public records posted to social media by a Lebanese lawmaker, Salim Aoun.

“In view of the serious danger posed by keeping this shipment in the warehouses in an inappropriate climate,” Shafik Marei, the director of Lebanese customs, wrote in May 2016, “we repeat our request to demand the maritime agency to re-export the materials immediately.”

The customs officials proposed a number of solutions, including donating the ammonium nitrate to the Lebanese army or selling it to the privately owned Lebanese Explosives Co. Marei sent a second, similar letter a year later. The judiciary failed to respond to any of his pleas, the records suggested.

Lebanese judicial officials could not be reached for comment Wednesday.

The Rhosus, which flew the flag of Moldova, arrived in Beirut in November 2013, two months after it left the Black Sea port of Batumi, Georgia. The ship was leased by Igor Grechushkin, a Russian businessman living in Cyprus.

Prokoshev, the captain, joined the ship in Turkey after a mutiny over unpaid wages by a previous crew. Grechushkin had been paid $1 million to transport the high-density ammonium nitrate to the port of Beira in Mozambique, the captain said.

The ammonium nitrate was purchased by the International Bank of Mozambique for Fábrica de Explosivos de Moçambique, a firm that makes commercial explosives, according to Baroudi and Partners, a Lebanese law firm representing the ship’s crew, in a statement issued Wednesday.

Grechushkin, who was in Cyprus at the time and communicating by telephone, told the captain he didn’t have enough money to pay for passage through the Suez Canal. So he sent the ship to Beirut to earn some cash by taking on an additional cargo of heavy machinery.

But in Beirut, the machinery would not fit into the ship, which was about 30 or 40 years old, the captain said.

Then Lebanese officials found the ship unseaworthy and impounded the vessel for failing to pay the port docking fees and other charges. When the ship’s suppliers tried to contact Grechushkin for payment for fuel, food and other essentials, he could not be reached, having apparently abandoned the ship he had leased.

Six crew members returned home, but Lebanese officials forced the captain and three Ukrainian crew members to remain on board until the debt issue was solved. Lebanese immigration restrictions prevented the crew from leaving the ship, and they struggled to obtain food and other supplies, according to their lawyers.

Prokoshev, the captain, said Lebanese port officials took pity on the hungry crew and provided food. But, he added, they didn’t show any concern about the ship’s highly dangerous cargo. “They just wanted the money we owed,” he said.

Their plight attracted attention back in Ukraine, where news accounts described the stranded crew as “hostages,” trapped aboard an abandoned ship.

The captain, a Russian citizen, appealed to the Russian Embassy in Lebanon for help but got only snippy comments like, “Do you expect President Putin to send special forces to get you out,” he recalled.

Increasingly desperate, Prokoshev sold some of the ship’s fuel and used the proceeds to hire a legal team, and these lawyers also warned the Lebanese authorities that the ship was in danger “of sinking or blowing up at any moment,” according to the law firm’s statement.

A Lebanese judge ordered the release of the crew on compassionate grounds in August 2014, and Grechushkin, having resurfaced, paid for their passage back to Ukraine.

The crew’s departure left the Lebanese authorities in charge of the ship’s deadly cargo, which was moved to a storage facility known as Hangar 12, where it remained until the explosion Tuesday.

Ammonium nitrate, when mixed with fuel, creates a powerful explosive commonly used in construction and mining. But it has also been used to make explosive devices deployed by terrorists such as the 1995 Oklahoma City bomber, Timothy McVeigh, and the Islamic State group.

Sales of ammonium nitrate are regulated in the United States, and many European countries require it to be mixed with other substances to make it less potent.

The general manager of Beirut’s port, Hassan Koraytem, said in an interview that customs and security officials made repeated requests to Lebanon’s courts to have the volatile material moved. “But nothing happened,” he said.

“We were told the cargo would be sold in an auction,” he added. “But the auction never happened, and the judiciary never acted.”

Koraytem, who has been in charge of the port for 17 years, said that when he first heard the blast Tuesday, he figured it might be an air attack.

He had “no idea” what caused the initial fire at the storage facility that preceded the second, far larger blast, he said. Four of his employees died in the explosion. “This is not the time to blame,” he said. “We are living a national catastrophe.”

But for many Lebanese, the story is another sign of the chronic mismanagement of a ruling class that steered the country into a punishing economic crisis this year.

Prokoshev, who said he is still owed $60,000 in wages, placed the fault with Grechushkin, and with Lebanese officials, who insisted on first impounding the boat and then on keeping the ammonium nitrate in the port “instead of spreading it on their fields.”

“They could have had very good crops instead of a huge explosion,” he said.

As for the Rhosus, Prokoshev learned from friends who sailed to Beirut that it had sunk in the harbor in 2015 or 2016 after taking water on board, he said.

His only surprise on hearing this, he added, was that it had not gone down sooner. 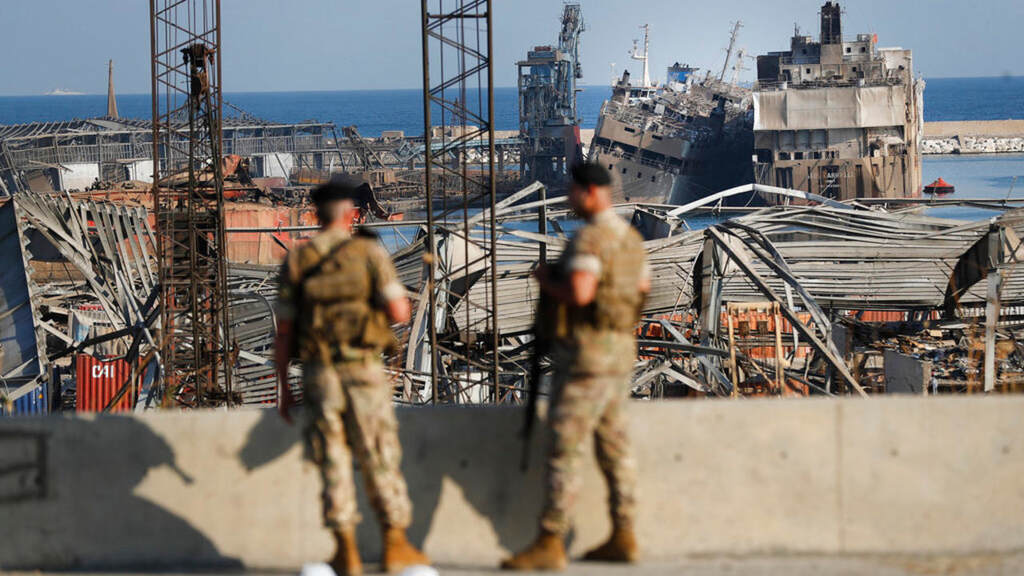 The strange history of the chemical cargo that caused the Beirut blast
Thousands of tonnes of ammonium nitrate, believed to be responsible for the devastating explosion in Beirut on Tuesday, have been…

Beirut blasts: The ammonium nitrate arrived as cargo on the ship Rhosus in 2014, according to two letters issued by…