‘A question of time’: Ukrainians determined to win back the south

In a wrecked office inside Mykolaiv’s administration building in southern Ukraine, Dmytro Pletenchuk showed off his collection of Russian weapons. Propped against the wall were fired Russian rockets and cluster bombs. “I’m thinking about opening a bar for veterans when the war is over,” he said. “My friend who was killed in Kharkiv used to run one. We could use them as decorations.”

Pletenchuk’s one-time government workplace was a spectacular ruin. In March, a Russian missile slammed into the regional state HQ, gouging a giant hole, killing 37 people and wounding many more. The security guards in reception miraculously survived. Colleagues having breakfast in the canteen were less fortunate. There are bloodstains on the stairs and in an upstairs corridor.

“We are fighting against fucking idiots. It’s good for us. But they have nuclear weapons,” Pletenchuk said, showing off his glass-strewn ninth-floor office, with a panoramic view over the city’s river and port. “Russia is like a monkey with a hand grenade,” he added. “It’s a problem for the whole world. We don’t know if they are going to blow everyone up.”

Early in Vladimir Putin’s invasion, Russian troops came close to seizing Mykolaiv, known in Soviet times for its huge shipyard. They swept up from Crimea, occupying the city of Kherson, a regional capital, and much of southern Ukraine. In September, the Kremlin plans to hold “referendums” in Kherson and Zaporizhzhia provinces, which will almost certainly result in them being annexed to Russia.

Ukraine is determined to stop this happening. President Volodymyr Zelenskiy has ordered a counteroffensive. The goal is to liberate Kherson and surrounding Russian-occupied settlements on the right bank of the Dnieper River, followed by further territories in the south and east, and ultimately Crimea itself, seized in 2014 by undercover Russian operatives.

Six months on, the war is entering a decisive phase. The next few weeks may determine Ukraine’s de facto borders for years to come. In the eastern Donbas, Russian troops continue to advance, pressing on the Ukrainian-controlled cities of Bakhmut and Sloviansk. In the south, by contrast, their grip appears shakier. The frontline runs between Mykolaiv and Kherson, across a steppe landscape of fields and pulverised villages.

Since June Ukraine has deployed US-supplied Himars multiple rocket launch systems to clinical effect. It has knocked out four crossing points over the Dnieper, including the Antonivsky Bridge connecting Kherson with the left-bank town of Oleshky. Russia’s S-300 and S-400 air defences seem powerless. Over the weekend they failed to stop the latest Himars strike. Video shows orange explosions and clouds of black smoke above the bridge.

Guided missiles also hit the Kakhovka hydroelectric power plant, rendering its bridge unusable to heavy vehicles. Ammunition dumps and command posts have been blown up. Last week Kyiv wiped out Saky aerodrome on the west coast of Crimea, in a mysterious operation deep behind enemy lines. Eight war planes were destroyed. Holidaymakers fled in panic, with traffic jams on the Crimea bridge back to Russia.

Ukrainian commanders, however, concede that a big push in Kherson is some way off. “We have more weapons. Not enough to do an offensive now and to beat the enemy. It is enough to defend our territory,” said Roman Kostenko, a pro-European deputy who heads the parliamentary defence and security committee. A special forces officer, Kostenko led the operation in March to defend Mykolaiv, where he and his military team are based.

Advanced western weapons have allowed Ukraine to erode Moscow’s military superiority, slowly but surely. “They have made a difference. Previously they fired 100 shells at us, now they fire 20. We are approaching parity,” Kostenko said. He continued: “To liberate Kherson we don’t need to attack Kherson. If we control the bridge, they have no logistics. If they make a pontoon bridge, it can easily be destroyed.”

The Russians appear to have come to the same conclusion. Some western intelligence experts believe it is a matter of time before they abandon Kherson and retreat across the river. Their military leadership reportedly fled last week to the safer left bank. Russian motorised and airborne regiments have been reinforcing defensive positions, with additional soldiers brought in, as well as equipment from Crimea.

Ukraine’s Himars rockets have a range of about 50 miles (80km). At the end of July a precision-guided missile blew up a military freight train in the Kherson region town of Brylivka. Russia has relocated some of its forward command and control centres, pulling back to the village of Myrne, Kostenko said. Troops are digging trenches and moving into civilian houses.

So far the Biden administration is refusing to supply Kyiv with Army Tactical Missile System (ATACMS) rockets, which can be used in Himars systems and have a 185-mile range. Its reasoning is that Ukraine could use them to strike Russia itself, an act the US fears may lead to a third world war. Zelenskiy dismisses this scenario and has pledged not to attack Russian territory. Negotiations continue, as the Pentagon reviews the situation.

Occupied Crimea, though, is not Russia. The peninsula, heavily militarised by Moscow, is a legitimate Ukrainian target, according to Washington and its allies. “If we got ATACMS, we could hit the bridge linking Crimea with the Russian mainland. It would dramatically change our position in the south,” Kostenko said. “We understand the fears of the US side. But with ATACMS we could further degrade Russia’s logistics.”

Kostenko’s Golos party colleague Roman Lozynskyi described Himars as a battlefield “game changer”. He showed the Guardian a 60-second video clip he filmed last month somewhere in the Mykolaiv region. A rocket pierces an inky black canopy, streaking above a ghostly tree line. The noise is shattering. More than a dozen guided missiles roar into the heavens, in rapid succession. There is smoke and bright white light.

“Ukrainian soldiers see Himars and feel proud of our capacity to fight,” Lozynskiy said. “It’s important for our spirits. We can use it to destroy dozens of Russian military camps.” Alongside Kostenko, Lozynskyi is one of a handful of lawmakers from the Verkhovna Rada, Ukraine’s parliament, to have joined the army. He has been serving since February on the southern front. In the corridor of his base are next-generation light antitank weapons and Stinger missiles.

Until Ukraine strikes, Russia is able to bombard Mykolaiv every day. The city – home to 240,000 people, from a pre-invasion population of half a million – has been badly damaged. On Saturday three Uragan rockets smashed into the port. Missiles have wrecked schools, the national university, several hotels, and the Golden Pheasant restaurant. At least 121 people have been killed and 534 injured, including six children.

Shelling has wrecked the main water pipe supplying the city. The local council has installed standpipes; residents spend part of their day queueing for drinking water and can be seen on the streets lugging five-litre bottles. “I ignore the explosions. If they bomb me, they can bomb me in my bed,” 72-year-old Valentina Bevz said as she waited her turn at a communal tap. “We have a saying: ‘You can’t escape your destiny.’”

She said her sister had rung on the day of the invasion from Crimea, asking tearfully: “Will you break off contact with me?” Bevz said: “She understands what’s going on and her friends are decent people. Most Russians are zombies and chauvinists. They think Russia is always right.” Irina Moroz, 79, described Russia’s president as “Putler”. “The name is a cross between Putin and Hitler,” she said cheerfully.

The governor of the Mykolaiv region, Vitaliy Kim, would not be drawn on when exactly Ukraine may go on the offensive. “It’s a question of time. I hope it will happen as soon as possible. We have an order to win back our territories and our people,” he said. The west could speed up the recapture of Kherson by giving Ukraine more heavy weapons and by not succumbing to war fatigue, he added.

Kim described the Kremlin’s tactics as “terrorism”. He said Russian soldiers were regularly shelling civilians to “break our will”. “It isn’t working. They are just killing people,” he noted. Asked if the promised counterattack was a bluff, the governor pointed to the gains Ukraine’s armed forces had already made. They had pushed the Russians back, he said, and liberated a string of villages to the east of Mykolaiv, around the Inhul River.

Back at the shattered administration building, Pletenchuk – a captain in the navy and a public affairs officer – said he had no doubt Ukraine would prevail. Ukrainians had always resisted Russian imperialism, he said. They included his grandfather, whom Stalin sent to Siberia. Pletenchuk reasoned: “We have motivation. They don’t want to die in this country. We are defending our homeland. They are fighting for a washing machine.” 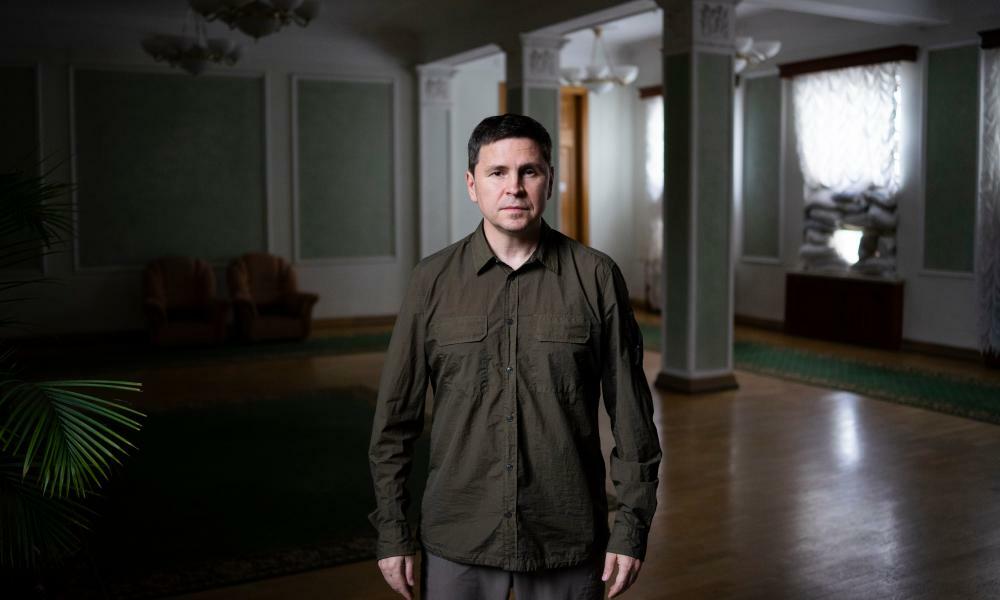 The Guardian - UK
From analysis to the latest developments in health, read the most diverse news in one place.
Strategic hits on Crimea are major blow to enemy psyche and its supply line

Ukrainian special forces were yesterday reported to be responsible for a series of explosions behind Russian lines in occupied Crimea.

Irish Independent
Ukraine has telegraphed its big counteroffensive for months. So where is it?

As Kyiv’s artillery starts to hit Russian forces in the south, analysts are left wondering whether there’s more to come.

While not formally confirming responsibility for mystery strike, Kyiv officials react with glee on social media

The Guardian - UK
One place to find news on any topic, from hundreds of sites.
Russia-Ukraine war: explosions reported in Crimea; Kyiv publishes identities of soldiers accused of war crimes – as it happened