A portrait of the Nobel masters of ‘metrics’ 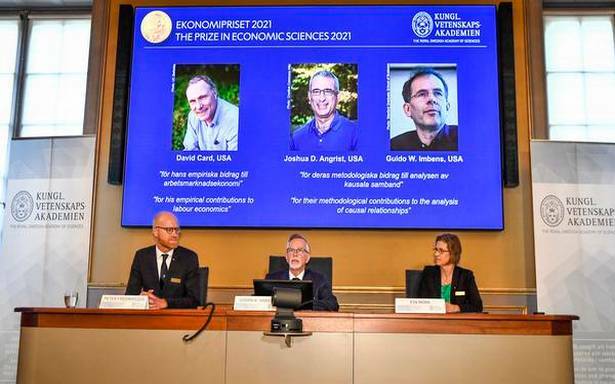 Every year on the second Monday of October, The Sveriges Riksbank Prize in Economic Sciences in Memory of Alfred Nobel a.k.a. the Nobel Prize for Economics is announced. This year, on October 11, three econometricians – David Card, Joshua D. Angrist and Guido W. Imbens — were given this distinct honour. Interestingly, David Card was awarded half the prize while the remaining half was split equally between Angrist and Imbens. Incidentally, every year the actual prize is awarded in a grand ceremony on December 10 which coincides with the death anniversary of Alfred Nobel.

The Nobel citation says that the prize was awarded “for empirical labour economics and methodological contributions to the analysis of causal relationships”. All three have many more things in common beyond their interest in this aspect of econometrics. Not surprisingly, they teach at some of the finest universities in the world — Card teaches at UC Berkeley, Angrist at MIT and Imbens at Stanford. Both Card and Angrist got their PhDs from Princeton, and their doctoral supervisor was the legendary labour economist, Orley Ashenfelter. Imbens obtained his doctoral degree from Brown University, and all three are fellows of the Econometric Society, a rare honour among economists. Their list of honours is extensive, but it is worth mentioning that the unique honour of being Guido Imbens ‘best man” goes to Joshua Angrist.

For me this year’s Nobel Prize for economics is especially precious since it has been given to those making a methodological contribution for establishing causality. Economics has always been interested in causal relationships, already evident from Adam Smith’s book title, An Inquiry into the Nature and Causes of the Wealth of Nations. This is particularly important in matters of human behaviour as casual relationships are critical for making policy. Suppose you observe that whenever my sister buys shoes, it rains in Bhubaneswar. If this was a coincidence or spurious correlation, then we have nothing to worry about. But if this was causal, then a flood prevention policy for Bhubaneswar would be to put an end to my sister’s shoe shopping sprees! This quest for causality is doubly important in this era of big data where analysts simply look for patterns in the data and not for behaviours that might give rise to the data generating process.

When we observe two events, A and B, being correlated, in general we cannot conclude that A causes B simply because a bunch of confounding factors that we have not taken into account may be present or there may even be reverse causality. A way out is to consider an experimental framework where we think of event A as a treatment and see what events it generates.

However, even this is problematic. Once we offer a treatment to an individual, it is not possible to study the same individual without the treatment. Therefore, we need to resort to statistical techniques. One type of statistical technique in this vein which was introduced and popularised in economics by the winners of the 2019 Nobel Prize Abhijit Banerjee, Esther Duflo (incidentally Angrist was one of Duflo’s PhD supervisors) and Michael Kremer is called a Randomized Controlled Trial (RCT). In this approach we compare the outcomes in the treatment and no treatment (control) groups just like in a medicine trial to establish causality while guarding against things like contamination across the two groups.

This year’s Nobel Prize winners use a different technique called Natural Experiments. To quote Peter Fredriksson, Chair of the Prize Committee, “Sometimes nature or policy changes provide situations that resemble randomized experiments,” and the brilliance of those scholars lies in their ability to recognise these situations and identify the conditions under which causal links can be established using these naturally occurring phenomena.

Take for instance the work of David Card (with the late Alan Krueger who many believed would have shared the Nobel) on minimum wages. Typically, economists believed that raising the minimum wage will lead to greater unemployment as firms will hire fewer workers. In 1992, New Jersey increased its minimum wage while neighbouring Pennsylvania did not. Card and Krueger surveyed a large number of fast food workers on either side of the New Jersey-Pennsylvania border in this natural experiment and established that the higher wages had no impact on employment! This study has helped change how economists view minimum wages; today it is widely believed that minimum wages may not affect employment since firms may pass on the costs to consumers.

One drawback of natural experiments is that we cannot control who participates in them. This is where the work of Angrist and Imbens has been very important to economics and other related fields. Angrist and Imbens developed a framework and demonstrated how statistical techniques can be used to draw precise conclusions about causal relationships from natural experiments.

Watch | Who won the 2021 Nobel Prize in Economics?

Finally, if you are looking to access some of the work of these scholars you can find plenty of papers on Google Scholar. Angrist is one of the authors of two excellent introductory books: Mostly Harmless Econometrics and Mastering Metrics that are probably the most accessible of all their work. Imbens is the author of an all-encompassing book titled Causal Inference for Statistics, Social and Biomedical Sciences. David Card is one of the editors of several volumes of the encyclopedic, Handbook of Labor Economics.

Sudipta Sarangi is a Professor of Economics at Virginia Tech, U.S., and is the author of the recent book, The Economics of Small Things