A panchayat in Thiruvananthapuram revives paddy cultivation after two decades 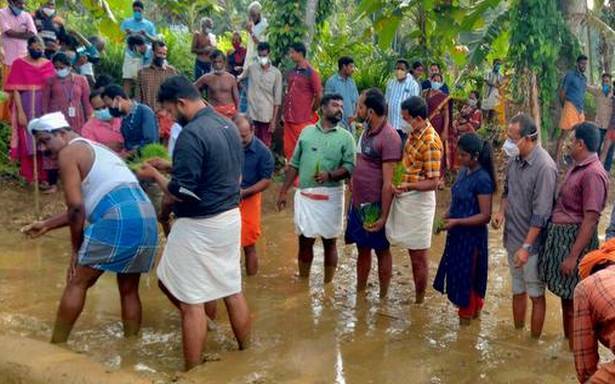 October 1 was a momentous day for Anacode in Poovachal panchayat, Thiruvananthapuram district. After 23 years, paddy cultivation was revived here. Seedlings were planted on 90 cents spread over five fields. Work will start on the remaining 40 cents next week.

While grama panchayat and Krishi Bhavan of Anacode are supporting the farmers with funds and guidance, Krishi Vigyan Kendra Mitraniketan is offering the btechnical know-how. Nanma (Nature Affectionate’s Noblest Movement and Association), a registered organisation that has been campaigning and promoting environment-friendly initiatives, has been at the forefront to restart cultivation in the panchayat. “We have been working towards this for the last few years. But not many farmers were enthused about it since they felt that it was not going to be profitable. We could restart it only because the panchayat set aside funds for the same,” says Pradeep Nanma S, one of the founders of Nanma.

There was a time when Anacode was synonymous with its paddy fields. However, people moved away to other crops over the years when they failed to find markets for paddy. Most of them started growing vegetables after partially filling the paddy fields. “When we approached these farmers, many of them were discouraged by the expenses to convert their plots into paddy fields. It takes at least ₹30,000 to make 25 cents of land suitable to grow rice,” Pradeep adds.

Five farmers came forward to grow paddy — Biju T, Venu T, Thulasikumar G, Bijukumar and Narayanan Nair. “A dream has been fulfilled. It was probably 30 years ago or so that I last saw lush green paddy fields here. I have been growing vegetables and bananas on my plot all these years,” says Biju, 44.

Thulasikumar G, 53, adds: “I remember working on the field with my family when I was young. They were forced to stop it when we suffered heavy loss. I decided to go back to paddy cultivation because the panchayat and institutions such as KVK have extended support.”

‘Uma’ rice variety has been planted now. They have adopted single seedling (‘otta njaar’) method instead of the conventional way of planting a bunch of seedlings. “The advantage of ‘otta njaar’ method is that less quantity of seeds is needed and 40 to 90 grains can be harvested from a single plant. Usually we make a ‘njattadi’ (seed bed) in a paddy field. Since we didn’t have the fields for that, we made the seed bed on the terrace of one of the farmers. It took 30 days for the seeds to germinate and ready to be planted,” explains Pradeep.

Nanma hopes to increase the area under cultivation to at least five acres provided more farmers come forward. “We also want to attract youngsters to farming,” he says.