The image dazzles from a computer screen in the corner of the room: six beams of red-orange light bursting from a luminous Milky Way star.

But the most entrancing part of the picture — among the public’s first dispatches from the revolutionary James Webb Space Telescope — lies in the background, where amorphous blobs are really swirling galaxies.

From a desk across the room in Baltimore’s Space Telescope Science Institute, astronomical optics scientist Charles LaJoie zooms in, and even more cloudlike spirals appear, once concealed in the reaches of space.

For the scientists at the institute — the hub for all things Webb — the image is there as a reminder of what’s to come. When all of Webb’s 18 mirror segments are completely aligned, likely before the end of April, astronomers will be able to peer deeper into the cosmos than ever before.

To the astronomers in the room, seeing a background of galaxies from behind the world’s most powerful telescope was anticipated. But for the engineers, focused for so long on building the telescope, it was a “wow moment,” said Lee Feinberg, Webb’s optical telescope element manager for over 20 years.

“The hilarious thing about it is: The engineers, when we simulated this thing … we simulated a star, never thinking we’d see galaxies,” he said.

At the institute, scientists like LaJoie are preparing to take the reins of one of humanity’s most astounding astronomical achievements. Ever since the telescope’s launch on Christmas Day, the institute has been abuzz with a rotating cast of characters — from NASA’s Goddard Space Flight Center, from the European Space Agency, from contractor Northrop Grumman.

The teams from around the world have descended on the building, located on the Johns Hopkins University campus, to guide the telescope, which is close to 1 million miles away into orbital harmony and ready its instruments for discovery.

Once Webb has cooled enough for its infrared instruments and its mirrors are prepared for crisp observation, Baltimore-based scientists will largely take charge of monitoring the craft and leading it through an array of scientific studies in the years to come.

The institute already handles similar responsibilities for the Hubble Space Telescope, which continues to make observations from Earth’s orbit.

Just last month, scientists used Hubble to capture what’s believed to be the farthest star ever seen, which they named Earendel. The star is so distant that its light has taken 12.9 billion years to reach Earth, so it appears to astronomers as it was just a billion years after the Big Bang.

Scientists were only able to see the star, which they estimate is 50 times the mass of our sun, because of an unusual cosmic magnifying glass — a neighboring galaxy cluster that warped the fabric of space such that Earendel was brought into view.

Astronomers will need to use Webb’s high sensitivity to infrared light to confirm details about Earendel, given that the star is so far away that its light has been “redshifted” as it travels Earthward. Webb will likely be able to see even farther away than Earendel — potentially as far back as 100 million years after the Big Bang, when the first stars and galaxies began to form.

At the institute in Baltimore, excitement is building. In the room where scientists prepare mirror alignment calculations, beside that computer screen and its incredible array of galaxies, sits a poster, charting the course to a fully operational telescope. Scrawled above one of the steps: a note on how to mark the milestone of aligning the telescope on its first star: “Champagne.”

“We brought the data down, and when we saw how good it was. ... You can tell you’re in focus when you look at a star, and it’s two pixels across. Because if you’re not in focus, that thing’s wonky,” Feinberg said. “We could quickly tell that it was in great shape, and we had a little bit of a celebration.”

It was a stark contrast to the initial images to come from Hubble, which revealed a critical flaw in the mirror that required astronauts to make repairs in orbit. Such a repair mission for Webb, far more distant than its predecessor, would be out of the question.

Next, the telescope’s builders, like Feinberg, will pass the baton to Baltimore.

“We have to have a keychain ceremony,” Feinberg joked.

But first, the scientists have to wait for the telescope’s mid-infrared instrument, called MIRI, to cool down to 7 Kelvin, or roughly 450 degrees below zero Fahrenheit. Only then can the telescope’s mirrors get their final alignment so official astronomical observations can begin.

First will come the “early release observations,” images and findings curated to showcase the telescope’s capabilities to the general public. Those are expected in early July.

For now, what the telescope will capture for the early release is a tightly held secret, but the idea is “to highlight the beautiful imaging properties of the telescope, to highlight how the sky looks different in the infrared versus the visible, to show off the power of the telescope in being able to see faint galaxies,” said Christine Chen, an associate astronomer at the institute.

The images will not go directly from the telescope to eager eyes around the world, however. First, institute staff, including science visuals developer Alyssa Pagan, will work to transform the black-and-white images from Webb into rich, full-color depictions of deep space.

”It’s really about leveraging both the art and science at the same time and having a balance between the two — making the images very compelling, but also being informed by the science,” she said.

After the early release images, astronomers from around the world will begin using the multibillion-dollar telescope to conduct their observations. The first year or so of observations is set, although an exact schedule hasn’t been determined, said Chen, who also serves as the Science Policy Group lead for Webb. The group issues calls for proposals to the scientific community, and organizes a peer review network that selects the astronomy teams that will have a shot to use Webb to answer their burning questions.

The next opportunity for proposals could come at the end of this year. Chen said she expects even more applicants — after Webb has proved to the world that it truly works.

In that way, the demand for the telescope will likely start “rolling downhill and gaining momentum,” she said. And plenty of those astronomers will visit Baltimore’s institute for a chance to engage one-on-one with its instrument experts. Webb’s unique capabilities are likely to prompt even more reasons to investigate exoplanets, early galaxies and more, Chen said.

“Whenever you have a new window on the universe, the way that JWST is, you’re going to learn a whole bunch of new things about the universe that you did not imagine before, and that’s going to spark more questions,” she said.

Meanwhile, with Webb’s final alignment on the horizon, engineers like Feinberg are slowly beginning to relax. For him, at least, there’s a family vacation on the horizon. But then, his eyes will turn to the next revolutionary space telescope in hopes that, this time, it might take fewer than two decades to build.

”Part of it, honestly, is the feeling of wanting to pass not just the telescope on to the team here, but to pass the learning that we did 10, 15, 20 years ago on to the next crew,” Feinberg said. “And so, there’s a little feeling of responsibility and also not wanting this to be a one-off.”

The National Academies of Sciences, Engineering, and Medicine have already shared a recommendation. The next great telescope ought to be an infrared, optical and ultraviolet telescope — a mix between Hubble and Webb, in a way — but larger than Hubble. One focus would be spotting faint planets orbiting very distant stars: a chance to capture signatures of life elsewhere in the universe.

“I use the analogy of hiking Mount Everest,” Feinberg said. “Different teams tried different ways to get up the mountain. But once they scaled Everest and knew the trail, it got a lot easier.” 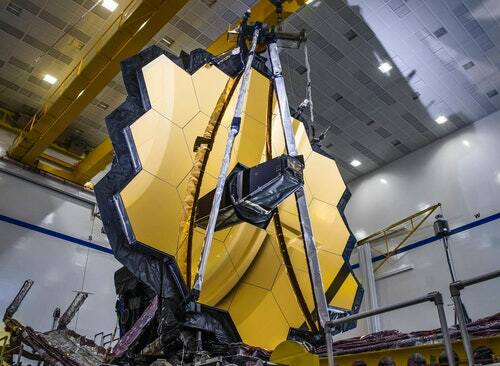 Inverse
From analysis to the latest developments in health, read the most diverse news in one place.
Holey Moley: Astronomers Find Rapidly Growing Black Hole From Early Universe

“The team obtained evidence that GNz7q is a newly formed black hole".

MIRI was developed through a 50-50 partnership between NASA and the ESA.

Zenger
What is gravitational lensing? 107 years later, a phenomenon predicted by Einstein is still bearing fruit

A massive object can act like a massive magnifying glass under the right conditions.

Inverse
Explained | All we know about the Bernardinelli-Bernstein comet, the largest one ever seen

The challenge of measuring the size of the Bernardinelli-Bernstein comet was to separate its nucleus from the coma.

The Hindu
One place to find news on any topic, from hundreds of sites.
How far back in time is it possible to see?

We have observed the most distant star ever – but to see even further, we have to look beyond light,…