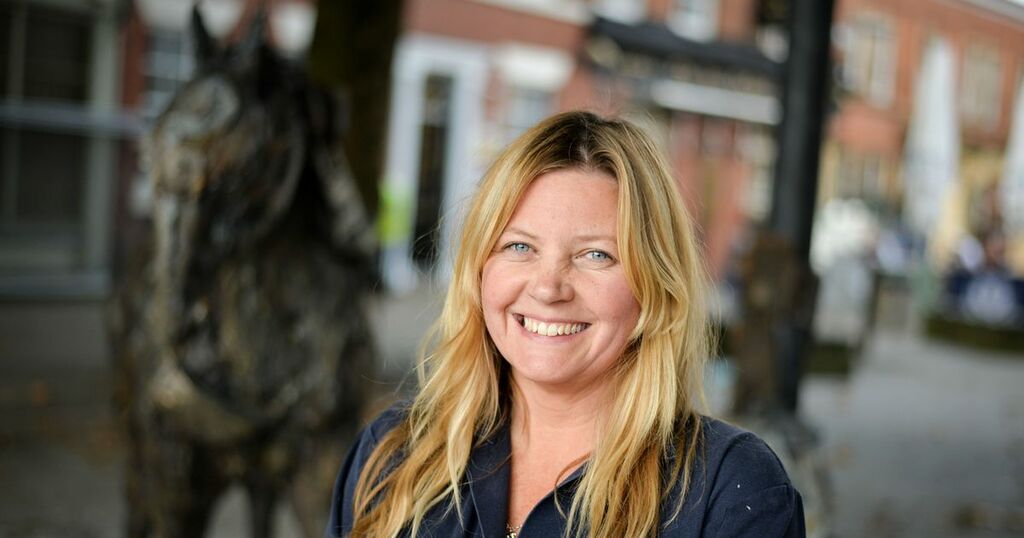 It stands just over eight feet high and is a Salford thoroughbred.

The bronze sculpture of a horse has been stabled in an historic square.

Embossed on it are messages from famous sons and daughters.

The wit and charm of Finney, the original "angry man" actor, will live on.

The star, who died, aged 82, in February 2019, was approached six months before for a quote to be included on the sculpture.

He chose: 'What I'm out for is a good time, all the rest is propaganda.'

The quote is from the film in which he shot to fame as the star - Saturday Night and Sunday Morning.

Singer, songwriter, and co-founder and bassist of legendary bands, Joy Division and New Order, Peter Hook, was born in Broughton.

He said: “I have Salford Rules painted on my stage equipment and that, along with my name and one of my guitars is included on the statue. I’m very flattered and honoured to be there alongside Salford greats like L. S. Lowry and Albert Finney. I’m a proud Salford boy and it’s wonderful to celebrate what Salford has done.”

DJ, radio presenter, and former Salford Jet band member, Mike Sweeney, submitted the message: "Salford Made Me Who I Am."

The sculpture also celebrates the city's pioneering pedigree by adding its "firsts" into the design.

Books weaved into the mane are a nod to England's first public library opening in Salford in 1850.

The £50,000 sculpture has been installed in Bexley Square - famously the location of a violent clash on October 1st 1931 between police and some of a 10,000 strong crowd protesting against unemployment.

It was created by artist Emma Rodgers in the garden of her home during COVID.

She famously made the statue of Cilla Black in Liverpool.

Salford's historic debt to horses was an inspiration for the work.

It was the first city to have horse-drawn trams which were routed along Chapel Street, next to where the sculpture stands.

They were also used in its coal mines and along its canals.

The horse’s veins mirror the Bridgewater Canal which began in Worsley in 1761, and was a key part of the Industrial Revolution.

Train tracks run along the bridle symbolising the first public railway through Eccles and across Chat Moss in 1830.

Each book on its mane represents a piece of Salford’s history and remembers famous sons and daughters such as Emmeline Pankhurst and scientist James Prescott Joules who lived locally.

A poppy has been added to honour the Salford Pals, battalions within the Lancashire Fusliers, who died in World War One.

The Vimto drink is also featured as the first factory was in Chapel Street.

The horse stands next to a sculpture of an old style 11 and a half feet tall lamppost.

Funding for the sculpture came from developers X1 who transformed the former Salford Town Hall, and later Salford Magistrates building, in Bexley Square, into apartments.

“I wanted to bring together and celebrate these firsts in one piece, offering an opportunity to discover, explore and reflect on Salford’s fascinating and inspiring stories,” said Emma.

“The name Salford derives from an Old English word meaning willows by the ford and this is symbolised by the entwined trees at the top of the lamp post, as well as signifying that Chapel Street was the first street in England to be lit by gas in 1805.”

She studied a friend’s horse - Louis, a Hanoverian, which is one of the oldest horse breeds in the world and Monty, a Welsh Cob to capture their spirit and personality in her design.

Chester Racecourse also invited her to study racehorses closely which helped her understanding of horse bone and muscle structure.

Emma also added a dog cocking its leg against the lamp-post in tribute to Salford artist Harold Riley and his famous sketches of dogs.

City Mayor Paul Dennett said: “Salford men and women pioneered social and scientific advances, made personal sacrifices in war, helped women win the right to vote, invented Vimto and created music, films and art which are renowned throughout the world.

“We wanted to capture and celebrate that rich history of Salford firsts – many of which happened in Chapel Street and add another exciting element to the bars, restaurants, businesses and homes which are breathing new life into the area.”