A muddy, green patch on the farthest end of a 440-acre lake is where we spot pelicans, painted storks, and coots, in hundreds, during a walk along the lake on a windy morning. The Nanjarayan Tank, a bio-diversity hotspot, has just been announced as the 17th bird sanctuary of Tamil Nadu on April 25.

“Just two days ago, the count was at 220 cormorants and 165 pelicans,” says Ravindran Kamatchi, President of Nature Society of Tirupur, started in 2009. “The mud flats scattered in the middle of the lake support a thriving ecosystem and are out of bounds for humans. This undisturbed habitat attracts birds in large numbers.”

The Nanjarayan Tank also known as Sarkar Periyapalayam Reservoir, is located on the outskirts of Tirupur city near Koolipalayam, about 60 kilometres from Coimbatore. “It is over 800 years old and birds have been visiting for centuries,” says Ravindran, who was in the forefront along with a few other naturalists with a long-standing request to declare the lake as a protected wetland or bird sanctuary.

The team has so far recorded 181 species of birds, including migratory and residents, 16 species of reptiles, over 40 varieties of butterflies, 11 species of mammals and as many as 76 types of flora. “When C Samayamoorthy took charge as the first District Collector of Tiruppur, which was formed in 2009, we approached him with a petition to declare the tank as a bird sanctuary. In 2019, we submitted a project report to I Anwardeen, IFS, Additional Principal Chief Conservator of Forests. We made a one-minute video with drone shots to give a glimpse of the tank’s rich diversity... We have been working towards this for years. We received support from officials like S N Tejaswi, DFO and also NGOs like Vanathukkul Tirupur,” explains Ravindran.

The tank, built by the then local King Nanjarayan as a source for irrigation, is a haven for migratory birds. “We spotted four bar-headed geese in 2010, the first significant sighting of a migratory bird, one of world’s highest-flying birds from Europe that soar over the Himalayas while migrating in winter. We used to travel to Koothankulam or Point Calimere to sight this bird,” he recalls. Another notable sighting is a flock of 14 ruddy shelducks that breed in parts of Europe and Central Asia (a first-time record for Tamil Nadu in such large numbers in 2020).

The 18-member team is a regular at Forest Department surveys and census studies, and also rescues injured birds, mostly owls, koels, and peacocks before handing them over to animal rescue centre.

They roped in people who live on the banks of Nanjarayan Tank as stakeholders in conservation. “They alert us when they spot illegal fishing activities. We created awareness against bursting crackers during Deepavali as it coincides with peak migratory season. They don’t disturb the habitat of migratory birds that flock the lake.”

But, it’s a cause for worry that the numbers are declining. They recall memorable sights when the lake resembled a blue canvas speckled with black, brown, and white colours once thousands of ducks like northern shovelers, garganeys, northern pintails and common teals arrived during the migratory season, between December and March.

“The desilting work in 2015 carried out by the Public Works Department depleted the mudflats (sediment deposits). With effluents from dyeing units let in, water pollution is rampant, making it less conducive for the migratory birds. A few years ago, we counted more than 20,000 birds. Now, the numbers are 2000. Once the Forest Department take steps to restore the habitat after setting up the bird sanctuary, we can expect the numbers to increase.”

A conservation centre is expected to come up to document the bird diversity as well as watch towers, interpretation centres, walkways and a butterfly garden. Educating children is a priority, says Ravindran. The society has so far completed over 300 education programmes on appreciating Nature and has reached out to as many as 80,000 children across Tiruppur, Erode, Coimbatore, Pollachi, and Tuticorin.

“Initiating children into Nature, and motivating them towards conservation with a scientific temper is our objective. We talk about how birds, as farmers of the forests, have a great ecological significance in dispersal of seeds and regeneration of forests. Then, we talk about habitat, conservation...and bring them here to the lake.” 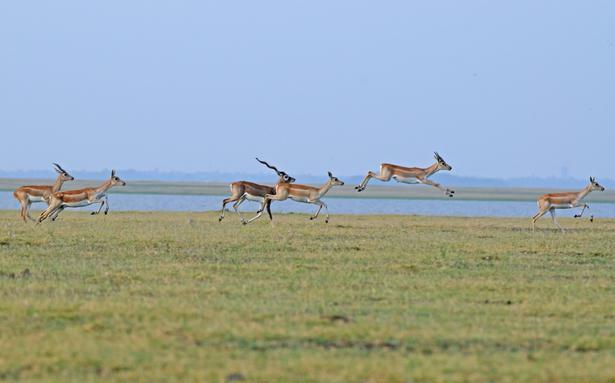 Where have the blackbucks bolted?
The sight of blackbuck herds frolicking in the backwaters of Sriramsagar Project drew wildlife enthusiasts to the site in droves…

The battle to save an endangered bird has brought focus onto an industrial development zone near Kurri Kurri.