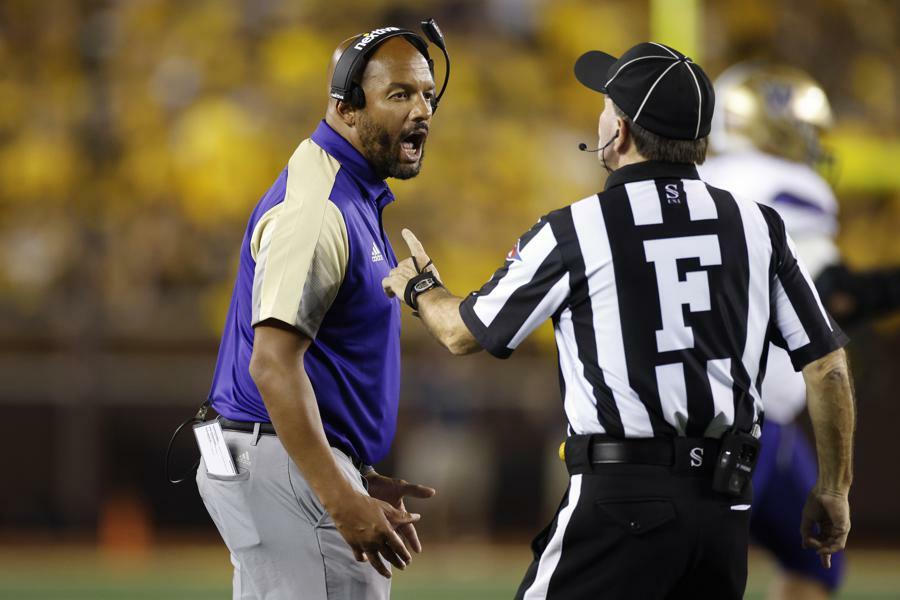 Many teams off to slow starts can remind themselves that conference play has yet to begin. They need to get going, though, as the season could grow old very fast for those that continue to have an empty space in the win column after another week or two.

There are 20 winless teams heading into this weekend. For a handful of them, it is no surprise they are off to a rough start. However, each of the six teams highlighted below were expected, for the most part anyway, to at least break even and become bowl eligible. They still can, though each of them will have to dig out of an 0-2 hole in order to do so.

Many of the Huskies’ problems through two weeks can be found in the run game on both sides of scrimmage. Offensively, UW has found the end zone only twice after two weeks thanks in large part to averaging less than two yards per tote and 58 yards per game, which ranks 125th out of 130 FBS teams. Against the run, Jimmy Lake’s team ranks 121st in allowing 235 yards per game. Furthermore, in losses to Montana (13-7) and Michigan (30-10) the defense failed to come up with a turnover.

It is hard to imagine a worse start for a team that was expected to battle Oregon for the top spot in the Pac-12 North. All they can do is turn the page, though, and for the Huskies that means hosting Arkansas State on Saturday before the curtain rises on conference play next week against visiting Cal. Speaking of their conference foe....

The Golden Bears could not get much going offensively in a 22-17 opening-week loss to visiting Nevada. They piled up 442 yards at TCU last Saturday, only to allow 505 in a 34-32 setback. Many good things happened against two good opponents, but Justin Wilcox’s team failed to put it all together in both defeats. After hosting Sacramento State of the FCS this week, Cal better find a way to get all of the parts working together before the conference slate starts with trips to Washington and Oregon sandwiched around a visit from Washington State.

A very entertaining and heart-warming Labor Day evening encounter against visiting Notre Dame gave way to a mind-boggling 20-17 loss to FCS opponent Jacksonville State last Saturday. A 41-38 overtime loss to the Fighting Irish, in which the Seminoles roared back from an 18-point deficit thanks largely to the memorable return of McKenzie Milton, had many in Tallahassee thinking their team could be in for a fine season. The ‘Noles, who last year trailed JSU by two touchdowns after one quarter before turning things around, led this year’s encounter by 10 points with less than five minutes to play, but were in the midst of allowing the first of two lengthy TD drives with the winning score coming as time expired.

The ACC schedule opens in far-from-imposing fashion with a trip to Wake Forest this week followed by visits from Louisville and Syracuse. To become bowl eligible, Mike Norvell’s team might need to win all three given how demanding the schedule becomes thereafter.

Though one could see the Golden Hurricane taking a step back with All-American linebacker Zaven Collins having departed for the NFL, that step was not expected to be a large one from the standpoint of what was returning to a team that lost to Cincinnati on a last-second field goal in the AAC championship game. Alas, Philip Montgomery’s squad has opened with a pair of losses by a combined seven points. That doesn’t seem too bad, but one of the defeats was 19-17 in the season opener at home against FCS foe UC-Davis, a game in which Tulsa turned the ball over three times.

Last week, the Golden Hurricane did not turn the ball over against Oklahoma State and held the Cowboys to 313 yards only to see a slim fourth-quarter lead turn into a 28-23 loss. An opportunity for a nice in-state road win went by the board. With a trip to Ohio State on Saturday and conference games against Houston and Memphis looming, Tulsa could find itself in quite a hole come midseason.

After playing only four games and having just as many cancelled last season, Steve Addazio’s first full year in Fort Collins figured to be one in which it might take a few weeks to see what he has to work with. Hence, it was not a surprise that the Rams opened the season with a loss to FCS power South Dakota State. But falling behind by as many as 26 before losing 42-23?

A team that some thought could become bowl eligible, and still may, welcomed Vanderbilt last week. The Commodores came limping into town after suffering an embarrassing season-opening 23-3 loss to East Tennessee State that stretched their losing streak to 11. However, the Rams fell to the ‘Dores, 24-21, on a late field goal. Now the schedule is more difficult as games at Toledo, which scared Notre Dame, and at Iowa, which is ranked No. 5, are next. Maybe by conference play, which begins October 9 against visiting San Jose State, Addazio’s Rams will have smoothed many of the kinks and can turn things around.

After 16 seasons at the helm in Athens, Frank Solich announced in July that he was retiring due to health reasons. That was a blow. At least the man handed the keys to the program, OC Tim Albin, had been with Solich for 21 years dating back to their time at Nebraska. So maybe a team that played only three games last season could maintain its aspirations and get on the path to winning its first MAC title since 1968. That still may happen, but what a rough start it has been.

The Bobcats played well, but could not finish drives in a 29-9 home loss to Syracuse to open the season. They finished a few drives against visiting FCS opponent Duquesne last week. However, the defense could not get off the field — the Dukes had the ball for 41:02 — in a 28-26 loss that was sealed when the Bobcats failed to convert a two-point attempt after crossing the goal line with nine seconds remaining in the game. The non-conference schedule resumes at Louisiana on Thursday night and at Northwestern next week.