A Glimpse Behind The Curtains Of The Wild Beyond The Witchlight 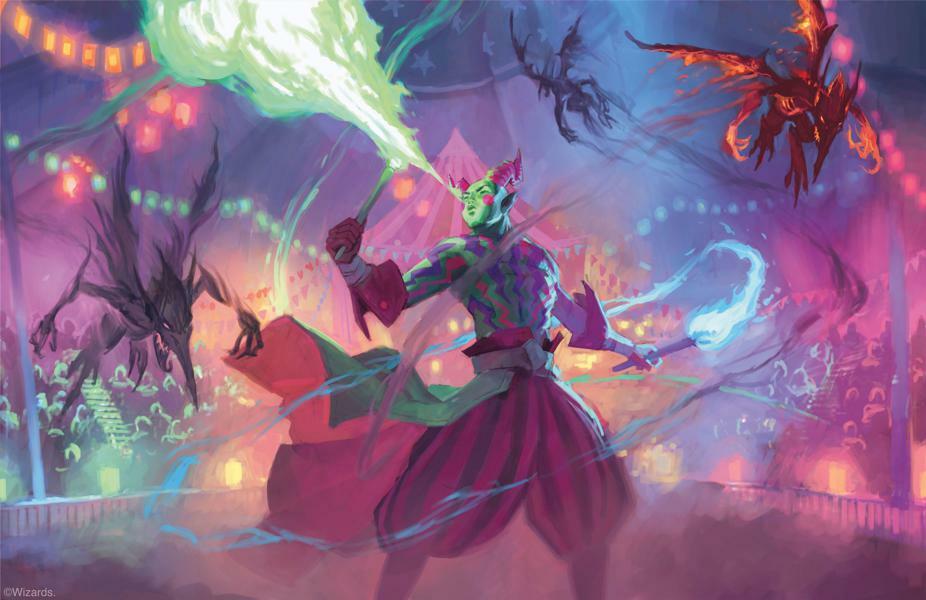 Dungeons & Dragons has taken players and Dungeon Masters to all sorts of strange locations filled with treasure and intrigue. For this year’s storyline book, the adventure comes to the players.

The Wild Beyond The Witchlight focuses on a carnival that appears on the Material Plane in whichever world the Dungeon Master is running. The designers took their inspiration from all sorts of mysterious carnivals sprinkled throughout pop culture, most notably the 1962 dark fantasy Ray Bradbury novel Something Wicked This Way Comes.

“Apart from being evocatively written,” said Chris Perkins, D&D Game Design Architect, “Bradbury’s novel deals with the theme of time—which is also a theme in The Wild Beyond the Witchlight. The novel’s autumnal setting reinforces that theme, as does its carnival. Our carnival isn’t as menacing as Bradbury’s, but the Feywild certainly has a sinister edge to it (although there’s plenty of whimsy there, too).”

The Witchlight Carnival offers entrance to the Feywild. Ruled by the archfey, the Feywild is a place of powerful magic, wonderous sights and unexpected perils. Much like the domains of Ravenloft and the Shadowfell were explored in Van Richten’s Guide To Ravenloft, so does this book explain a concept new to this edition of Dungeons & Dragons: the Domains of Delight.

“Since the Feywild and the Shadowfell are both reflections of the Material Plane,” said Perkins. “it made sense to give the Feywild something akin to the Shadowfell’s Domain of Dreads. Instead of Darklords, the Feywild has archfey—powerful, unique Fey beings who turn parts of the Feywild into domains to call their own.”

There are also plenty of ways for players to get involved with the carnival. The book details the rides and attractions players can interact with. Tables can still rack up a little treasure in a new way; by trying their hand at one of the games detailed in the book.

“One of the games is called the Almiraj Ring Toss,” said Perkins. “It’s a magical variant of the ring toss, where you have to toss a ring over a wooden statue of an almiraj (a bunny with a unicorn horn) while it’s teleporting around on a tabletop. No easy feat! Each carnival game comes with simple rules, and there’s a table of fun prizes you can roll on. The emphasis is on having fun and winning prizes. Much of its uniqueness comes from the owners and attractions, but we also have some mechanical elements that are unique to this carnival, including a Mood Tracker and a Time Tracker. Certain events happen at certain times, and the mood can affect how the characters get along with the carnival owners and others.”

The Wild Beyond The Witchlight also details new player backgrounds that connect directly to the storyline to give players a personal reason for joining the adventure.

“The feylost background was inspired by the classic fairy tale trope of the Feywild intruding upon the natural world,” said Perkins. “If you want to play a character who spent much of their youth in the Feywild, this is a great background to choose. Maybe you wandered into the Feywild as a youth, or maybe a Fey creature lured you it. Basically, you’ve lived in two worlds, which is a fun idea to play with.”

“The Witchlight Hand is a background that ties your character more closely to the carnival,” said Perkins, “which is inspired by many a young person’s dream to run away and join the circus.”

Not Just Another Dungeon

This adventure storyline also builds on techniques seen in Candlekeep Mysteries. There are plenty of opportunities for battle but many encounter also have other solutions presented rooted in roleplaying and diplomacy.

“If a group wants to hack-and-slash its way through the adventure, said Perkins, “they can—there are plenty of tough challenges awaiting them. What we tried to do in the adventure is present non-violent ways to resolve encounters, enabling clever characters who heed the rules of the Feywild to accomplish their goals without having to resort to violence. For example, you can fight Warduke, or you can convince him to join your team; the adventure presents both options.”

The Wild Beyond The Witchlight releases on September 21st in regular and alternate cover editions.