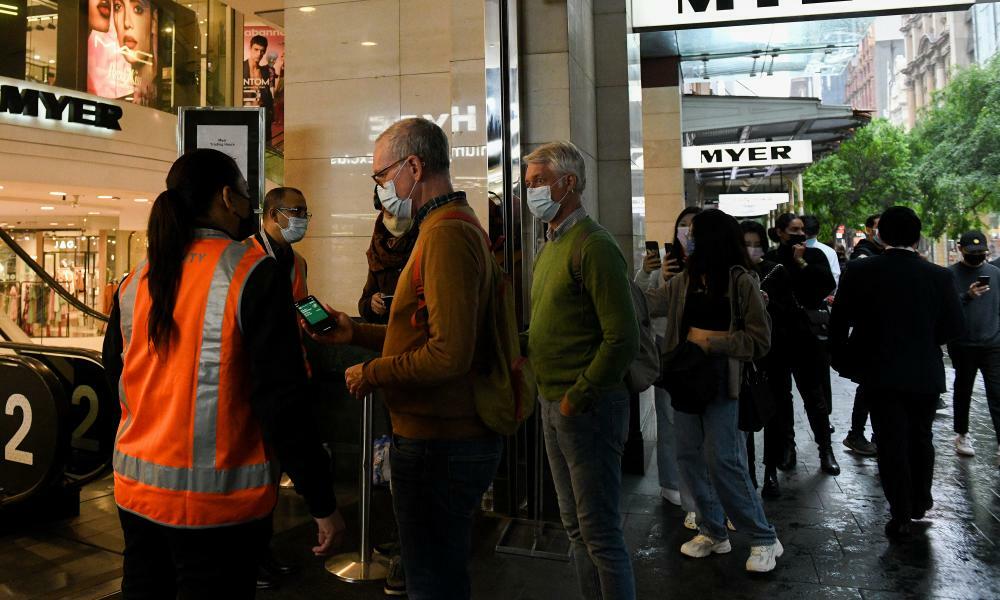 The logistical challenges of having to check vaccine certificates for customers was dawning on businesses in Sydney as they experienced their second day out of lockdown.

In the western Sydney suburb of Parramatta, one of the 12 LGAs of concern during the peak of the latest outbreak, retailers were using a combination of carefully placed barriers, security and rotating staff to check on customers before they enter.

“It’s an annoying add-on,” admitted Sheida, a manager at a fashion retailer in Parramatta, who did not want her full name used.

“I feel worse for the customers than the businesses, it’s such a hassle having to pull out your certificate in each store, as well as checking in.”

Sheida is one of the thousands of workers who have seen their job description change since greater Sydney emerged from lockdown on Monday for the vaccinated.

Residents over 16 who are unvaccinated or cannot produce proof of their status are legally banned from those venues.

The New South Wales police commissioner, Mick Fuller, warned that officers would be on patrol across greater Sydney, enforcing the rules, and issuing $1,000 fines for any breaches.

“If people think that we are not enforcing the health orders this week, they are mistaken. We want to be out there, particularly to help those small shops, the pubs, clubs and shopping centres,” he told Sunrise on Monday.

“I would ask that the premises owner or the person behind the counter call the police and make sure the police force respond to those calls..”

Business owners and managers told the Guardian a majority of customers were following the rules, but said it had already become a hassle to ensure certificates were checked before entry.

“Most of the time, I have to ask each customer who enters myself,” Sheida said. She manages her store alone, meaning the responsibility comes down on her to ensure all customers are fully vaccinated.

“The customers have been nice about it, it’s just a bit of a hassle, for both sides. I always feel a bit guilty asking people, it’s so personal.

George, a store manager at a men’s fashion retailer, told the Guardian it was “annoying” having to check on each customer and to ask them to produce a certificate.

“It is a bit annoying, but what can we do? This is a disease. But, I mean, is it my job to really ask people to show me their certificate?”

George manages the shop along with his coworker, and they alternate in checking on customers, but said he remained nervous about missing anyone.

“What if I’m in the fitting room, and someone walked in and we were busy? Some people walk in and walk out in half a minute, what do I do then?”

George said he had not had to deny anyone entry, but was anxious about having to do so.

Other retail workers in Parramatta revealed they had been forced to deny people entry, and it had been a difficult part of the job.

The staff, who asked to remain anonymous, said those denied entry cursed or tried to argue their way in, but eventually gave up and left.

Some customers were producing physical copies of their certificates, but most had it on their phones and could easily access it.

Most retailers in Parramatta had also barricaded their entry in one way or another, with only some major retailers lacking someone checking the certificates at entry.

Roula Kantarakias, a manager at Michael Hill Jeweller, said she’d had to barricade the entire entry to the shop, and had instructed her staff to deal with each customer as they arrived.

“It just requires more resources to deal with,” she said. “We closed up the entry so it’s easier for us, rather than letting them all in, and potentially having to ask someone to leave.

“It’s just easier for us to control the flow.”

When asked if the new rules were affecting the business, Kantarakias said not yet, but the impact may be felt once the excitement at opening up died down.

“Obviously this time of year, people want to go out and spend. But yes, I do think it’ll affect us a bit.”