A 64-kilometre-long Russian military convoy is approaching Kyiv. Here's what we know so far

On Monday, a 64-kilometre-long convoy of Russian tanks and armoured vehicles was spotted via satellite on a road to Ukraine's capital, Kyiv.

Russian troops have been advancing on the capital north from Belarus — where this convoy originated — and also from Russia to the north-east.

But reports on Wednesday indicated the convoy may have stalled.

Here's what we know so far.

Why has it stalled?

Logistics problems including a lack of fuel and food could be responsible for stalling the massive Russian convoy.

An unnamed senior US defence official told the Associated Press the US had seen Russian military columns literally run out of fuel and, in some places, they were running out of food.

The official said morale among Russian troops was suffering as a result.

But that same official pointed out Russia still had a significant amount of combat power that had not been tapped.

"One reason why things appear to be stalled north of Kyiv is that the Russians themselves are regrouping and rethinking and trying to adjust to the challenges that they've had," said the official, speaking on condition of anonymity.

The official told reporters it was unclear whether the convoy itself had stalled but it was not making much progress.

"The Russians have been surprised by some of the morale problems that they're experiencing and I think they're none too pleased about the logistics and sustainment challenges they've had," the official said, without providing evidence.

ABC Europe correspondent Isabella Higgins said Wednesday looked like a "crucial day" even if even if some things had moved slower than expected.

She told ABC News it was believed the convoy headed for Kyiv was now just 15km away.

"There was a feeling it would arrive faster than it has," Higgins said.

"There's been reports that it's been hampered by breakdowns."

Images have appeared on social media over the past several days showing Russian tanks and military vehicles idle on the side of roads, some appearing to have run out of fuel.

Still, the bombardment on Kyiv has continued with Russia warning residents in the capital to flee their homes.

What is the convoy's purpose?

Western leaders feared the influx of ground forces was a bid by Russian President Vladimir Putin to topple the government and install a Kremlin-friendly regime.

Western intelligence agencies and analysts speculated this might be an attempt to circle Kyiv and put the city under siege, cutting off supplies and escape routes before moving in.

Olga Boichak, a Ukrainian-born lecturer at the University of Sydney and digital war expert, said there were rumours Mr Putin had planned to take Kyiv by Monday, but his own military pushed back due to the "tremendous civilian toll".

"We know that Russians have been changing their strategy.

"They're regrouping and are now working in smaller diversion units rather than bigger groups."

She said the convoy had run into logistical issues and the sheer length of it suggested there had been some mismanagement.

But even if Russia did manage to somehow capture Kyiv, it would be unlikely to be able to hold it for long due to strong and well-organised civilian resistance in the area, Dr Boichak added.

Military analysts agree it is not normal to have a convoy that long because it makes the Russians vulnerable.

Dr Boichak said another possible scenario is that the convoy could be part of a move to cut off the north-east of the country.

"We know that it's been extremely hard for the Russians to capture the administrative units and the biggest Ukrainian cities," she said.

"It seems that the convoy was supposed to somehow assist with their goal to capture Kyiv, but the fact that they still haven't been able to do it just undermines that with each day of this full-scale military invasion, Putin's regime is suffering very huge losses."

What kind of weapons does it include?

In the images, trucks appeared to be carrying self-propelled artillery pieces alongside BMP3 armoured carriers and Russian tanks.

Fuel tankers and trucks carrying food, ammunition and an estimated 15,000 troops appeared to make up other parts of the convoy.

Along parts of the route, the units were travelling two or three vehicles abreast on the road, but in other sections, they were spaced out, satellite images provided by Maxar Technologies showed. 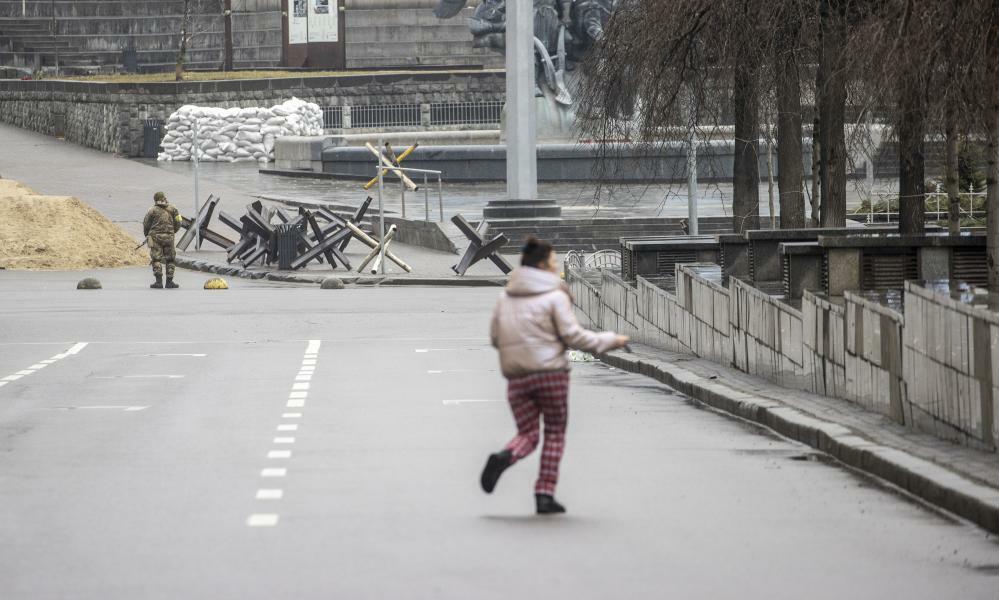 A Russian military convoy threatening Kyiv is far bigger than initially thought, with satellite images showing it occupying much of…

A military convoy that would stretch from Sydney's CBD past Penrith is pushing towards Kyiv, with warnings a major attack…

ABC News
EXPLAINER: Is stuck convoy in Ukraine a setback for Russia?

A massive Russian military convoy has sat, largely stalled about 15 miles (25 kilometers) outside the Ukrainian capital

The Independent UK
One subscription that gives you access to news from hundreds of sites
Ukraine: 40 mile-long Russian convoy heading to Kyiv twice as long as previously thought