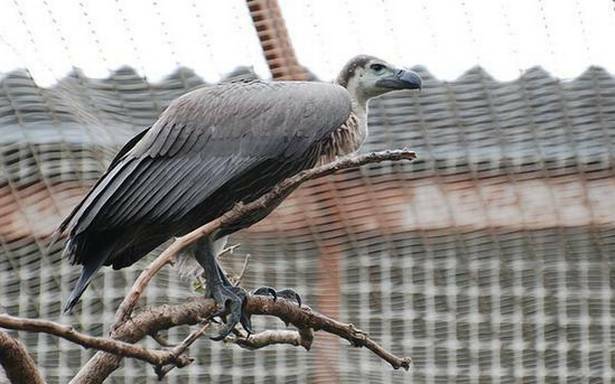 In October 2020, eight critically endangered Oriental white-backed vultures were released into the wild for the first time in India from the Jatayu Conservation and Breeding Centre (JCBC) situated at the Bir Shikargah Wildlife Sanctuary in Shivalik ranges of the Himalayan foothills in Haryana’s Pinjore. A year later, they have blended well into the untamed habitat outside the aviary, offering hope to conservationists. But the grave threats to the survival of vultures are far from over.

“The Oriental white-backed vultures that were released in the wild are resident birds and not migratory, so they largely stay within a radius of 50-100 km of the breeding centre. All eight vultures were deployed with satellite tracking devices on their back, and orange-coloured wing tags on both wings, so we are able to monitor them. They have been bred in captivity so they will gradually adjust in the wild. They are flying well and have managed to locate water. Also, they have managed to join the wild flock with other vultures such as the Himalayan griffon, which is surely an encouraging sign. They are not taking sustained flights as other wild birds do, but they are gradually increasing their time of flying, which is again good. We need to wait for another one year. If they survive, then it will be an indication that the environment is safe, after which we will release other raptors as well,” Dr. Vibhu Prakash, Deputy Director and Principal Scientist at the Bombay Natural History Society (BNHS), who heads the JCBC, told The Hindu.

As many as 378 vultures of three species are housed at the centre, of which 131 are Oriental white-backed vultures, 195 are Long-billed vultures, and 52 are Slender-billed vultures. The “founder stock” of birds at the centre was collected from various States, including Assam, Haryana, Rajasthan, Gujarat, Madhya Pradesh and Maharashtra, to maintain genetic diversity.

In 2016, the centre released two Himalayan Griffon vultures, bred in captivity for 10 years, into the wild. “One of the birds could be monitored for 45 days, and within this period, it started flying strongly and could soar very high with other species of vultures. There was no tracking device on these birds, so they could not be followed beyond 45 days. This gave us confidence to carry out future releases,” said Dr. Prakash.

Once very common, vultures are on the verge of extinction in India. Uncontrolled veterinary usage of non-steroidal anti-inflammatory drugs (NSAID), including Aceclofenac, Ketoprofen and Nimesulide, and the illegal use of the banned drug Diclofenac, are toxic to vultures if they feed on carcasses within 72 hours of the drugs' administration to such livestock.

The vulture population in India was estimated at 40 million once. Populations of three species of vultures — the Oriental white-backed vulture, the Long-billed vulture and the Slender-billed vulture — have declined by over 97% since the 1990s, and that of the Oriental white-backed vultures by a drastic 99.9%. It has been established that the vulture population was decimated by the veterinary usage of Diclofenac in India.

“In 2006, the veterinary use of Diclofenac was banned. Later, in 2015, after the Government of India placed restrictions on the size of Diclofenac vials for human consumption to just 3 ml, the prevalence of Diclofenac in cattle carcasses was reduced to less than 2%, which is safe for vultures. But while the use of Diclofenac has gone down, its unlawful usage is still reported. Moreover, the continued use of vulture toxic drugs, including Aceclofenac, Ketoprofen and Nimesulide in livestock treatment, could pose a major impediment to the reintroduction programme,” said Dr Prakash.

Navjit Singh, secretary of the non-profit Avian Habitat and Wetland Society, said the key reason behind the use of Diclofenac is the fact that it’s a very low-cost drug. “Governments need to ensure that alternative drugs are subsidised to be cheaper than Diclofenac,” he said.

The VCBC was established in 2001 to investigate the devastating declines in India’s Gyps species of vultures. It’s a collaborative initiative between the BNHS and the Haryana Forest and Wildlife Department, to save the three resident Gyps species of vultures in the State — the Oriental white-backed vulture, the Long-billed vulture, and Slender-billed vulture — from looming extinction.