We were told today, in the latest version of events offered by authorities in Texas, that police left children locked in a classroom with a gunman for 78 minutes as they repeatedly called 911 begging for help, not knowing that their would-be rescuers were standing idly by. If there is a more poignant and more savage allegory for a country with a clear and urgent reason to solve an obvious policy problem that lacks either the will or courage to do so, it couldn’t be imagined by a vengeful god.

I don’t know why these children had to die like this, terrorized. I have wondered, when I’ve been too weak to counsel myself against wondering, how the surviving children from that classroom will live now. I think about the kids calling 911—just as they were told to do, just as we, adults, have always told them to do—hearing the operator, and requesting help. I want to know why their classmates’ lives are over. I want them to come back. I want none of this to have ever happened. I want this country to change.

[Elizabeth Bruenig: A culture that kills its children has no future]

At times like these, I think we ought to have some kind of language for the uniquely contemporary experience of grieving after the mass murder of children, or some ritual for comforting ourselves. It’s hard to grieve in a nation of anxious strangers, and there will be so much more grief. But I wish there were some word for that other, darker emotion, bred sui generis by these hellish events.

By the time the estimated death toll was emerging in news reports the day of the Robb Elementary School shooting in Uvalde, Texas, my husband had already picked up our small children from school and preschool, and had taken them to a nearby park to play while I cooked their dinner. As the news alerts lit up my phone, I started to feel dizzy, then nauseated, then panicked—I texted my husband asking if he wouldn’t mind bringing the kids home right away, as I felt something like a raw-edged ache in my ribs that I knew wouldn’t be soothed until I held each of their little bodies in my arms. My husband texted back. They’re having such a good time, he said. Why bring them inside? It’s finally warm and sunny out.

Immediately, I felt ridiculous. I was ridiculous. I’ve been ridiculous so many times in the hours since, glancing in on my sleeping children with hawkish nervousness, like a first-time mother fretting over a newborn; pacing on the front porch awaiting their arrival home, unfocused and unsteady until I can see their faces and hear their voices. I know it’s a statistical anomaly. I know it almost never happens. I know there are a million things I worry less about that happen with greater regularity and worse effects; but those things are unfortunate, and this is evil. Misfortune is awful, but this was something worse. This was torture. This was cruel. This was intentional. The distinction matters.

In fact, the notion that this massacre could have been avoided—and if not avoided via gun policy, then at least potentially ameliorated by faster, more proactive police intervention—is part of why contemplating it for very long induces vertigo. As soon as preliminary details about Uvalde began to surface in the news, the entire decade of valiant efforts to reform American gun laws in the name of the 20 first graders murdered at Sandy Hook Elementary School in Newtown, Connecticut, suddenly seemed in vain. Over the past few years, when mass shootings have happened, furious Twitter users have prepared to bat back politicians’ measly well-wishes with tweets about the worthlessness of “thoughts and prayers”; this time, there was hardly even much of that. People just seemed wounded, somewhere between angry and resentful and helpless and plaintive. It was happening again, but nobody bothered to say they couldn’t believe it.

[Read: What it feels like to lose your child in a mass shooting]

I’ve never had a hard time with difficult subject matters; on the contrary, handling sensitive topics is a key aspect of my vocation. And while I have reviewed rape kits and scores of victim interviews, witnessed a pair of executions and read multiple autopsy reports, interviewed victims of every type of abuse and exploitation at every level of granular detail with gratitude for the honors—I still struggled, stomach in my throat, with the second-day reporting.

It was hard to find anyone genuinely unaffected, even if, as usual, the affectation some chose was delusional bravado or childish disinterested ennui or whatever bullshit mien. Online, uncharacteristically, the majority of people seemed rightly horrified, and rightly struck with that same sense of helpless, terrorized grief.

I barely have any as it stands. Maybe just a language for this weird, modern grief would be enough for now, a way to say: I’m terrorized, helpless, devastated—and alone. What is there to say, and whom to say it to? The world splits open in Uvalde, Texas, and every heart breaks in isolation. My kids come up the steps after school, and they don’t know why I can’t let them go. 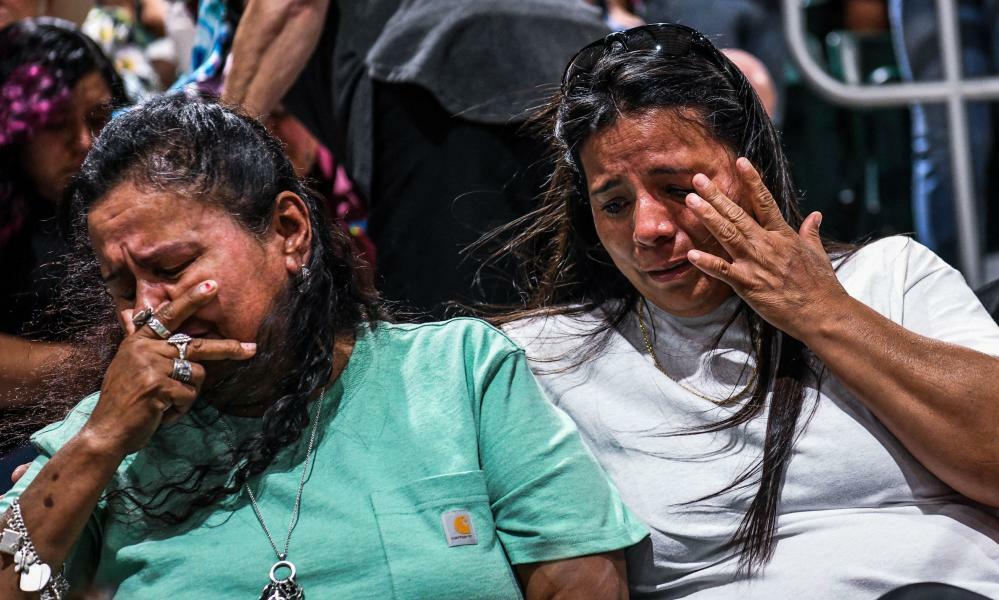 First Thing: Texas gunman was inside school for 40 minutes
More information has emerged on the deadly school shooting, including a timeline. Plus, Walmart apologizes for selling Juneteenth-themed ice-cream

The Guardian - UK
One subscription that gives you access to news from hundreds of sites
90 minutes of terror: Questions mount over Texas shooting
With pressure mounting to explain the delayed police response to the massacre at a Texas elementary school that killed 19…

Los Angeles Times
That other American tradition: after a mass shooting, the media comes to town

The tragedy in Texas reminds that while media presence can be a sign of support, it can also quickly become…