AMRITSAR, India — For seven decades, Sudarshana Rani has ached to learn her younger brother’s fate. She was just a child when the communal bloodletting that surrounded Britain’s 1947 Partition of India wiped out nearly her entire extended family. But in the paddy fields that became execution grounds, there was one body she did not find: that of her 5-year-old brother, Mulk Raj.

Rani, a Hindu, and an older brother were sheltered by a Muslim classmate’s family before they abandoned their home near Lahore, which became part of the new Muslim nation of Pakistan. In India, they built anew. The brother, Piara Lal Duggal, retired as a senior officer in India’s state bank. Rani raised children who are now doctors and bankers.

Yet, her mind remained with the brother left behind. Had Mulk Raj made a run for it and survived? She has imagined him searching for her; she saw him everywhere and in everything. Even a family movie outing a few years ago became part of her long, quiet search.

“I thought maybe this is my brother — they made the film about him,” she said about the 2013 biopic of Milkha Singh, a star sprinter who had overcome his own family’s massacre during Partition. “I walked around the field, I saw everyone — not him,” she said of that long-ago day in the rice paddies. “Maybe he told his story.”

The chaos, confusion and religious violence that accompanied the cleaving of Pakistan from India 75 years ago this week resulted in the deaths of up to 2 million people and unleashed one of history’s largest displacements, with Hindus and Muslims from once-mixed communities rushing in opposite directions to new homelands created along religious lines.

In the decades since, the divisions have become more rigid than ever, the frontiers fenced and heavily guarded, after repeated wars, cross-border terrorist attacks and the backlash of swelling nationalism. To this day, despite a vast shared heritage, the two countries remain estranged, their guns fixed on each other and diplomatic ties all but nonexistent.

In both, majoritarian populism is ascendant. India is gripped by rising Hindu nationalism and anti-Muslim sentiment, with the ruling party increasingly chipping away at the country’s constitutionally mandated secularism. Pakistan is swept by an Islamic fundamentalism that sees acts of dissent as blasphemy worthy of violent punishment. The population of Kashmir, the Himalayan region disputed between the two countries, remains hostage to militarism and militancy from each side.

The markers of division are ubiquitous. In a small room at the cremation grounds of a Pakistani temple, the ashes of hundreds of Hindu dead have remained for years, as relatives wait for visas to scatter them in the holy river Ganges in India. Fishermen from both countries often meet trouble as they trespass invisible maritime demarcations. A couple of years ago, the Indian authorities even arrested a border-traversing pigeon on suspicion of spying.

With the passing decades, the nationalist fervor and mutual suspicion have largely replaced the memories of bloodshed and displacement.

Survivors of Partition, now in their twilight, have often been reluctant to share their stories with their children, author Aanchal Malhotra writes in her book “In the Language of Remembering.” Many, including Malhotra’s own grandmother, Bhag Malhotra, have carried their trauma quietly, alone.

“We never wanted to burden them with our memories,” the grandmother tells Malhotra in her book. “We wanted the sadness to end with us.”

Some survivors have managed to return for a pilgrimage to a lost home. Others, such as the Duggals, have searched for answers.

Piara Lal Duggal, who along with his sister was the only known survivor of the massacre in the paddy fields, was able to find Muhammad Anwar, the classmate who had helped shelter them from the anti-Hindu mobs. For decades, the two wrote to each other.

In one letter, Anwar wrote that he had started a fish farm near Lahore and that the fish were growing to “2kg each.” He told Duggal that he went to a shrine every Thursday to light a candle and pray “to reconnect me to my friend.”

In a letter that the Anwar family still keeps, Duggal responded: “My piece-of-heart of a friend, my brother Muhammad Anwar,” adding, “The old thoughts of you and your family have been refreshed in my heart. Sometimes, I can’t even sleep at night.”

Among those who have made cross-border visits is Jagtar Kaur, a Sikh in her late 80s who lives on the Indian side of the Punjab region. During Partition, her father and grandfather were hacked to death by Muslim mobs.

As Kaur prepared for her visit in 2014, the irony wasn’t lost on her: She needed a visa and a passport to visit her own former home just a few miles across the border. The Pakistani side is so close that to check the weather, her family looks at the forecast for the Pakistani city of Lahore rather than the nearest Indian city, Amritsar.

“Our house had fallen, but I saw the metal columns of our roof,” she recalled from her visit.

At the time, the two governments were running trains and buses across the border. But escalating tensions in recent years have ended the services.

“There is nothing here now,” said Ramesh Chand, 59, who is retiring soon as a cleaner at the Attari railway station.

The Attari-Wagah border is largely sealed, with just a handful of visa holders crossing each day on foot. But every evening, the border gate opens for a pomp-filled flag-lowering ceremony, as each side turns into a little arena packed with spectators.

“Hot popcorn, hot popcorn!,” one of the many vendors shouted as families filed in to take their seats one recent evening.

Bollywood songs blared from loudspeakers on the Indian side, as people waved flags and danced. During the military marches, tall officers from both sides competed to see who could kick higher, who had a more impressive mustache to twist and who could scream with the most intimidation.

As the sun set, the crowds went quiet during the lowering of the two flags. “Long live India,” roared those on one side of the fence, while those on the other shouted, “Long live Pakistan.”

The absurdity and heartbreak of the overnight creation of new borders is reflected in the literature of the two nations. In a short story by Saadat Hasan Manto, a writer who lived in India and was forced to leave for Pakistan, the two nations decide to exchange patients from their mental institutions, just as they had exchanged prisoners of war. A patient keeps trying to find out where his village, Toba Tek Singh, now lies.

“Where is it?” a friend answers him. “Where it has always been, of course.”

“But in Pakistan or in India,” the patient asks.

Indian poet and musician Piyush Mishra drew on the letters of a lover stranded on the Indian side who decades later wrote to his beloved, Husna, in Pakistan. His pain is expressed in simple curiosities over what may have changed with a new nation.

In the recollection of the Duggal siblings — the brother is now 86 and the sister 83 — their family were wealthy Hindu landowners in a majority-Muslim village near Lahore. During the height of the violence, a group of Muslim men arrived at the house and led them to the paddy fields.

“My father was bathing us. The younger brother was 5 days old,” Rani recalled. “He didn’t even have a name yet.”

Duggal, 11 at the time, managed to flee after a blow to the side of his head that has left a bald patch to this day. Rani passed out, unconscious.

The brother and sister stayed with Anwar’s family for about two weeks, then made it to the Indian side when convoys were given military escorts.

Seven decades later, Rani still hopes that her younger brother Mulk Raj will turn up one day. But she is uncertain. Even if the boy survived, he would be nearing 80 now.

Anwar died in 2016 at the age of 85. His family still keeps Duggal’s letters.

“They are the symbol of a friendship that the two friends kept alive despite the Partition,” said his son Saeed Anwar, who lives in Lahore.

He said his father would often weep while remembering the violence.

“What happened with Piara Lal’s family was tragic, and sadly Muslims of our area were involved,” he said. “Hindu and Sikh families were rich, and the desire for wealth was the major trigger for the violence.”

Duggal, like many other survivors interviewed, expressed little bitterness. He said “99%” of those on both sides were good people.

“But the times were such,” he said.

In one letter to Anwar, Duggal describes the hardship of growing up an orphan in India.

“I worked as a porter,” he wrote. “Every time I told someone that I wanted to study, they would say ‘the children who don’t have parents cannot study.’ But I didn’t lose courage.”

Duggal wrote of the better memories before the massacre, including his vivid image of Anwar’s father, Bashir Ahmad, smoking his hookah in the courtyard.

“He spoke very little, he rarely got angry, and he loved me a lot,” Duggal wrote. “Your mother, Khurshid Begum, would be making parathas with butter.”

In the letter, Duggal wrote that he was planning to get a passport and visit his lost home one day.

“There was only one friend of mine there, and he is no more,” he said. “There is no trace of our home there anymore.” 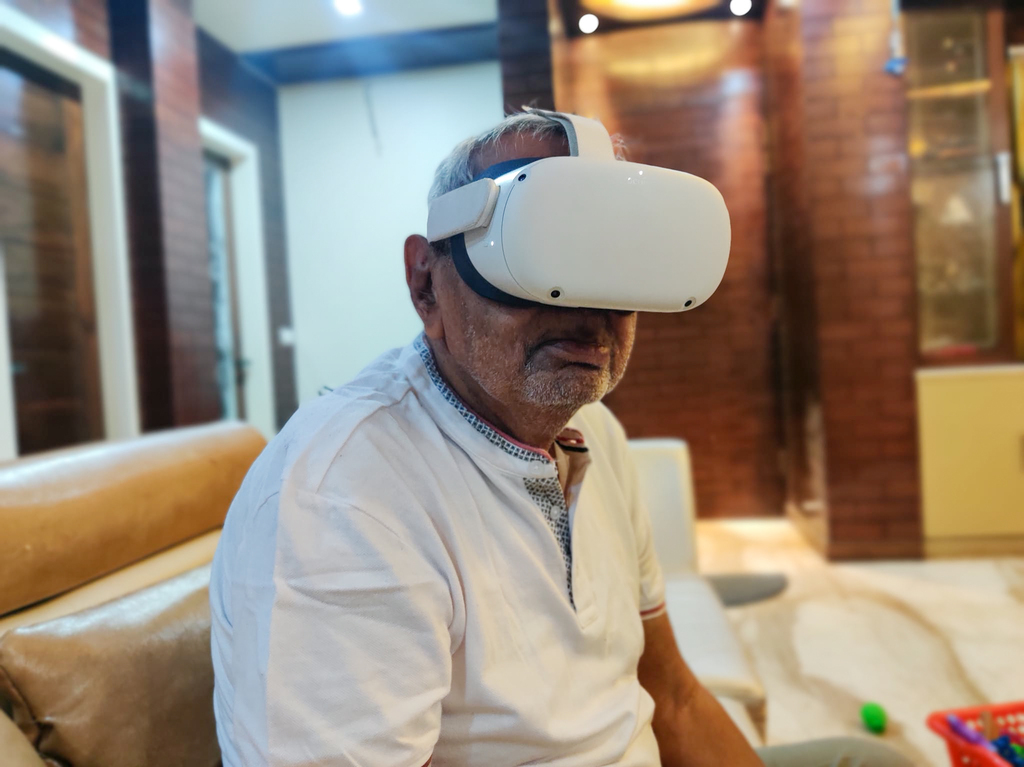 WEKU
From analysis to the latest developments in health, read the most diverse news in one place.
Split families still suffer after 75 years of India-Pakistan partition

Ali Hasan Baqai and Abid Hasan Baqai, brothers split for 75 years by the partition of India and Pakistan, talk…

Reuters
‘We must forget about divisions’: one woman’s journey home 75 years after India’s partition

Chance encounter on Facebook led Reena Varma, 90, to visit family home she was forced to abandon in 1947

The Guardian - UK
75 years of India partition: How tech is opening window into past

Al Jazeera
‘Finally we are together’: partition’s broken families reunite after seven decades

The Guardian - UK
One place to find news on any topic, from hundreds of sites.
Uprooted by partition: ‘I feel I don’t belong in England. I’m a very proud Punjabi’