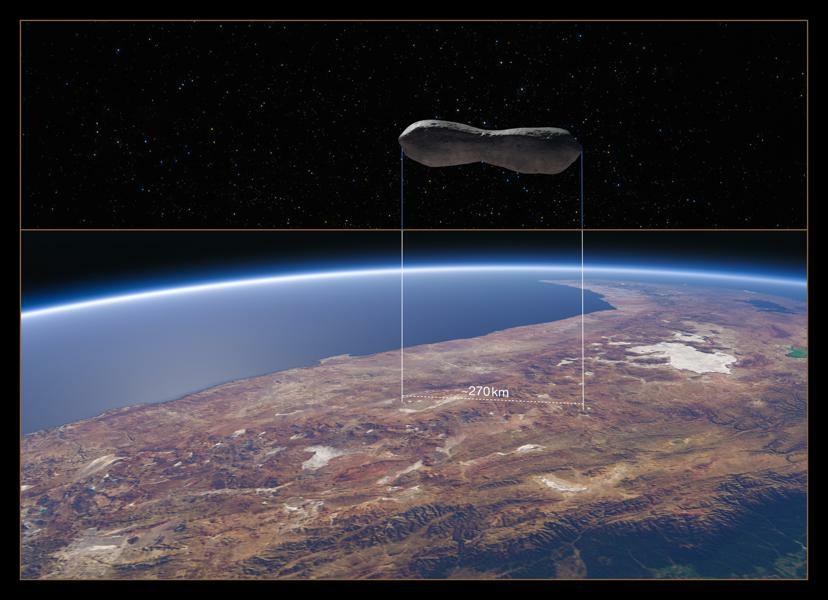 Astronomers have snapped the best photos yet of “Kleopatra,” an asteroid measuring 167 miles/270 kilometers in diameter—and which resembles a dog bone.

Calling it a “weird outlier,” the team—whose papers are published today in Astronomy & Astrophysics—also imaged and examined Kleopatra’s two moons, most likely the product of an ancient, violent collision.

Here are seven things to know about Kleopatra:

1. It has twin moons

Asteroids can have moons? Sure. Back in 1993 NASA’s Galileo spacecraft noticed the first moon orbiting the asteroid 243 Ida in the asteroid belt and astronomers have been noticing them ever since. It’s thought that the most likely way for an asteroid to get a moon or two is after a collision with another asteroid.

Kleopatra’s moons, called Cleoselene and Alexhelios after the twin children of the Egyptian queen, were found in 2008. One of the papers published today confirms their exact orbits for the first time.

2. It’s a unique and weird outlier

“Kleopatra is truly a unique body in our Solar System,” said Franck Marchis, an astronomer at the SETI Institute in Mountain View, USA and at the Laboratoire d'Astrophysique de Marseille, France, who led one of the studies.

“Science makes a lot of progress thanks to the study of weird outliers. I think Kleopatra is one of those and understanding this complex, multiple asteroid system can help us learn more about our Solar System,” he added.

3. It lives in the Main Asteroid belt

Officially called 216 Kleopatra, this huge asteroid orbits the Sun in the Main Asteroid Belt between Mars and Jupiter. It’s about 124 million miles/200 million kilometres away from Earth at its closest. It will never hit Earth.

Mostly a pile of metal, possibly a nickel-iron alloy rubble, Marchis was one of the scientists who used the W.M. Keck II telescope to discover back in 2011 that Kleopatra is 30-50% empty space.

The second paper published today indicates that Kleopatra is made up of loose “pebbles” that may have formed its two moons.

No—this is not an asteroid that’s new to science. Kleopatra was first discovered in 1880, but not until 2000 did its odd shape become obvious when NASA astronomers imaged it using the now dead Arecibo Observatory in Puerto Rico to bounce radar signals off it.

That 2000 study found that Kleopatra has two lobes connected by a thick “neck,” and it’s since been referred to as the “dog-bone asteroid.”

Marchis’ study, using the European Southern Observatory’s Very Large Telescope (ESO’s VLT) in the Atacama Desert in Chile to take photos between 2017 and 2019, found that Kleopatra one of the lobes to be larger than the other, and determined the length of the asteroid to be about 167 miles/270 kilometers.