60 days of not letting dishes pile up

It's an embarrassing personal confession that I'm a huge home cook but not the neat kind. I can fake it like the best when guests come over, but eagle-eyed readers of the food column I write for The Paris Review will have noticed the occasional splatter and dirty dish in the backgrounds of my photos. If that's the best I can do with witnesses, just outside the frame is often worse.

At my best, I'm fun-loving: I'm the mom who will bake something elaborate at 9 p.m. in a wrecked kitchen. As a result, my kids know their homemade pavlova from their homemade tiramisu. At my worst, things reach such a state that I'm running the dishwasher and churning through the handwashing all day long, several days in a row, trying to catch up from my culinary excesses. Sometimes I find Monday morning's soggy Tupperware at the bottom of Friday afternoon's sink, and am thoroughly revolted with myself.

I hope everyone reading this is saying: "Ew, gross, I cook every day and I keep my kitchen spotless!" But those who are like me may be interested to learn that I have recently, accidentally — and without any real effort — changed my prisoner-of-the-dishes stripes. It happened like this: Several months ago, after one of my epic dishwashing marathons, I decided to go a step farther and actually scrub the dull, grey surface of the empty stainless steel sink. This was a deep-cleaning maneuver that I would never have previously considered trying. (If you're incredulous that I'd never done this before: I hadn't. Yanno, the sink washes itself while you're washing the dishes? There's soap there?)

For full disclosure, the extra step was also a result of a recent general increase in cleanliness on my part. My partner of almost 20 years and I had (amicably) separated in December of 2020, leaving me with a burning desire to redecorate and little money to do it. So, I turned to cleaning and organizing as a kind of free home improvement — I couldn't buy a vintage standing mirror for my bathroom, but I could scrub grout. I actually began to find it inspirational. I mean, I'm still messier than most people, but cleaning has become an extension of my cooking (something I like!), in that it makes your home warm and inviting both for guests and the people who live there.

And so, that day, I scrubbed out my sink, and then, staring in awe at the smiting brilliance of its clean face, I decided to see how long I could keep it visible (if not gleaming, because that would be going too far). My method was the childhood game of "floor is lava" — no dish could touch the sink bottom, but instead had to be funneled straight to the dishwasher or drying rack. I had no real hope of success for even a day, but the sink stayed empty, the kitchen stayed clean, and as the days passed I started counting them. I would have expected washing every dish right away to be annoying — or impossible — especially with four pots on the stove in the middle of the evening dinner rush. And it's true that while actively cooking I sometimes move the dishes to the sink in a small cluster, which I immediately wash. But it was easy, and went so quickly I barely noticed it. Think of it this way: If you are used to washing dishes for days, what is 30 seconds? Dinner took no longer to cook, but the results were miraculous. I woke up every morning with no mountain in the sink, no struggle to plan breakfast based on the "level" and accessibility of the large skillet. I also suddenly had free time to do other things, like make my bed and unpack the kids' sports-practice bags in the foyer (another domestic imperfection of mine). The change was so dramatic it felt weightless.

There were some difficulties. I had to learn to put clean dishes away faster to make room for dirty ones. (Boring!) And I had to clean all the pots and pans before eating the food. (Incentive to work-as-you-go; it keeps dinner hot.) Things aren't all perfect. After a long day of working, cooking, parenting, commuting for sports, and supervising homework, I go to sleep early. I do not sweep for the bedtime-snack plates, or the 38 water glasses every member of my family needs to use every hour, so those are still scattered about my apartment in the morning. I also really hate washing the children's lunch Tupperware, so that tends to get piled by the sink — it "doesn't count" if it's still in the lunchboxes.

I was energized by success, though, so I kept it up, and weirder things began to happen. It was as if the sink had been a negative-energy vortex in my apartment for my entire adult life, and I had accidentally reversed its power, turning it into an engine of positivity. I have a crappy rental-apartment dishwasher (that cost my landlord $89.99; I saw the sticker), so I have to wash plastics, glasses and many plates by hand. I owned gloves, but barely wore them, but now that I need the gloves 100 times a day . . . I wear them every time. So, after about three weeks my fingernails actually grew out. I also became a clean cook. To keep dishes out of your sink, you have to keep them moving off your counters. Once I was paying attention to counter clutter, which I must never have done before, it became easy and obvious to whisk away the food scraps once the plates were gone, and then give the counter a wipe. My kitchen has become a place I almost don't recognize.

I would like to attribute all this change to the benevolent power of the clean sink, or the third eye of the disposal, chanting mantras while we sleep at night. Psychologically, however, it seems suggestive that my separation gave me control over my living environment that I didn't have before. To be clear, my former partner was a tidy person who would never have stopped me from cleaning, but we had real disagreements about home decor, and in the early days of our union the position of every lamp was a battle. After nearly two decades and a stalled personal relationship, we'd both given up mentally on our shared space. Well, I've taken back that control and run with it.

I stopped counting at 60 days, and I haven't had a significant mess in the kitchen since. It's wonderful, and the only sorrow is that I'm beginning to get used to it, and can no longer appreciate the difference with delight as blazing as a clean sheet of polished stainless steel. 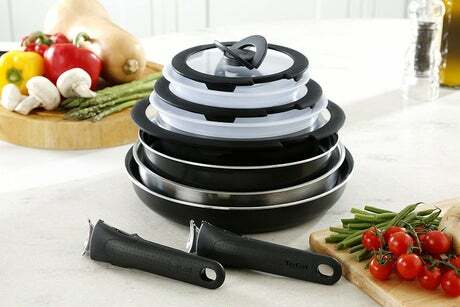 This quick and easy recipe is fragrant and foolproof, says Ann Maloney