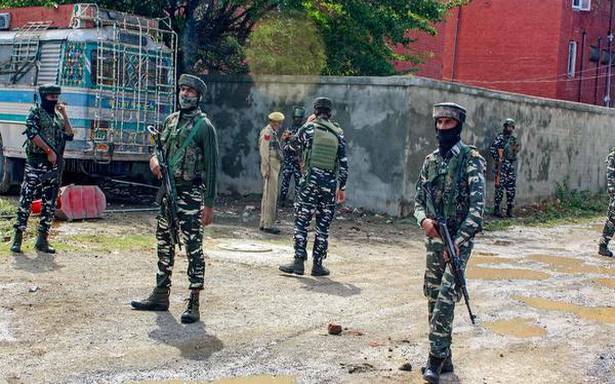 Panic gripped the outskirts of Srinagar on Monday morning when a CRPF patrol spotted and seized a bag full of hand grenades placed on the national highway.

“During a routine road opening exercise along National Highway 44, troopers recovered six Chinese grenades from a sandbag, which was placed on the divider of the road. The alertness of the troops averted an incident on the busy highway,” CRPF spokesman Abhiram said.

Due to the rush on the highway, the grenades were not defused on the spot. “They were handed over to the police for disposal,” he stated.

The grenades were placed at a location in Bemina area where the CRPF would deploy its quick reaction team (QRT) during the day, officials said.

Security was heightened on the highway.

The grenades’ recovery comes two days after militants executed twin attacks in the capital. A grenade attack was carried out on a police picket in Chanapora on September 11 and a policeman was shot dead the next day in Khanyar area.

An anti-militancy operation entered the second day on Monday in the Pir Panjal valley’s Rajouri district.

Two to three militants are suspected to be hiding in the area. Unconfirmed reports suggested that one has been killed in the operation so far.

An official said an operation was launched by the Army and the police in Gambir Mughlan area of Rajouri on September 11.

“During the search, hiding terrorists opened fire on the search party, which was retaliated effectively, in course of which one unidentified terrorist was neutralised,” the official stated.

One AK-47 with two magazines and 32 rounds and one grenade had been recovered, he added.

At least four militants were killed in the past 40 days in Rajouri district in anti-militancy operations.