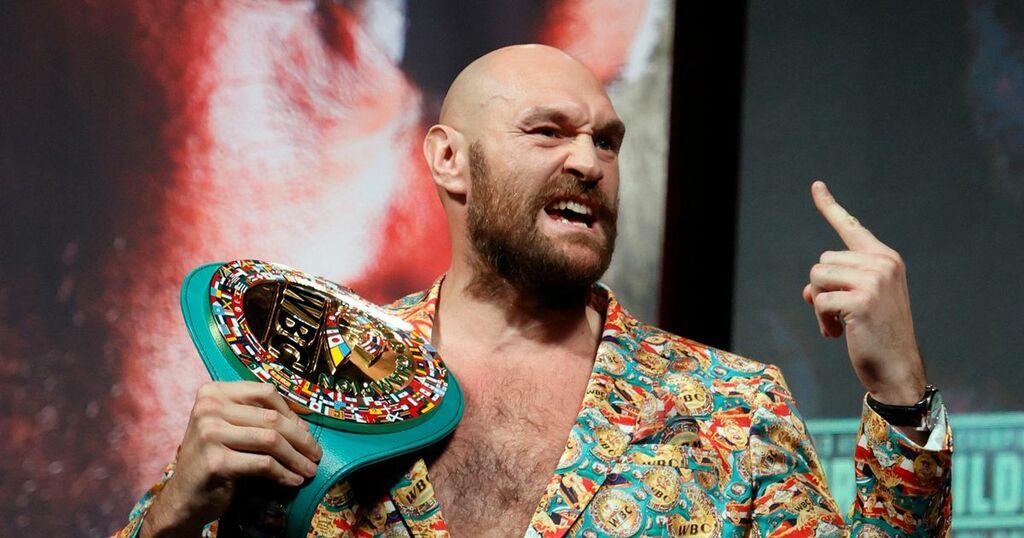 Tyson Fury and Deontay Wilder reignited their rivalry with an X-rated row at the official fight-week press conference.

The heavyweight rivals had not been face to face for four months since they appeared to promote their July trilogy bout.

Fury contracted Covid-19 shortly afterwards which pushed back their date with destiny until this weekend.

And Fury, who looked the more comfortable during the event, lured Wilder into a slanging match as the American's mask slipped.

The world champion laid into Wilder's list of excuses for his first career defeat last year - and the ferocity of their exchange meant there would be no face-off.

Tyson Fury is no stranger to a snazzy suit and he delivered yet again as he strode in wearing a two-piece emblazoned with pictures of his WBC and Ring magazine belts.

The champion also had matching Nike trainers and a bare chest as he oozed confidence during his first face-to-face with Deontay Wilder since the summer.

His American rival rocked up in a red tracksuit with a pair of headphones clamped to his ears as he did his best to drown out Fury's taunts.

And Fury said: "I have come here looking a million dollars and you have turned up looking like a tramp.

"He has got no shirt on to copy me, I am famous for that. Everyone wants to be like me, the Bronze Bomber needs to stop copying the Gypsy King."

There was never any real expectation that either man would say anything out of this world during the press conference - but there was a real anticipation over the face-off.

Back in June the staredown lasted six minutes before Wilder finally broke his gaze to hand Fury a moral victory.

But this time there was to be no such opportunity as promoter Bob Arum fumed that host Kate Abdo suggested there would be.

"She knew that the understanding was no face-off ... we said no face-off, and what does she say? 'Now we're going to do a face-off'.

Let's hope the rivals are allowed to come together at tomorrow's weigh-in.

Quite frankly, if you haven't heard Detonay Wilder accuse Tyson Fury of cheating by now then you've been living under a rock.

Wilder appears convinced that his rival loaded his gloves for their rematch - but he has also blamed his trainer, the Nevada commission, the referee and his outfit for his first career defeat.

He raised the issue again last night, saying: "I don’t regret it and I will go to my grave believing it because I have confirmation and clarity.

"Men and women lie but the eyes can’t, the eyes don’t lie.

"I am now a better man and fighter because if what I have learned and no. I will take nothing back, I needed it, it was a blessing in disguise."

But Fury retorted: "He blamed me, his trainer, his costume, the referee, the commission, one might have been believable but not 50

"It just tells me he is a mentally weak little person who I am going to beat again. I obliterated him in the rematch and he is getting it again."

Let's hope there is a conclusive winner on Saturday night.

It was interesting to watch the two fighters' differing approaches to the press conference.

Tyson Fury opted to stand for its entirety despite host Kate Abdo asking him to take his seat.

Wilder on the other hand, played with his phone every time Fury was asked a question.

But all week Fury has seemed at ease with this fight while Wilder is the one who seems to be struggling to figure out how to approach it.

SugarHill Steward and Malik Scott were brought on stage to offer their thoughts but we were left none the wiser.

Both men reckon their charges are firing on all cylinders ahead of what is crunch time for both heavyweights.

Scott said: "I went into Deontay’s toolbox and pulled everything out that he did well. I wanted to make sure that we drilled it over and over again. I didn’t teach him anything new. Deontay Wilder can do it all, I just pulled some of those things out of him.

Stewaed replied: "Training Tyson Fury has been just about making him better. He was already an exceptional boxer before I started training him. We fine-tuned those skills and understood some things that he didn’t see. Most importantly, it’s just about being ready. When he’s ready, he’s unstoppable.

"Tyson Fury is very conscious of Deontay’s abilities. We’re just concentrating on being sharp and being focused. There’s always more to learn in boxing and Tyson is learning and having fun with it."