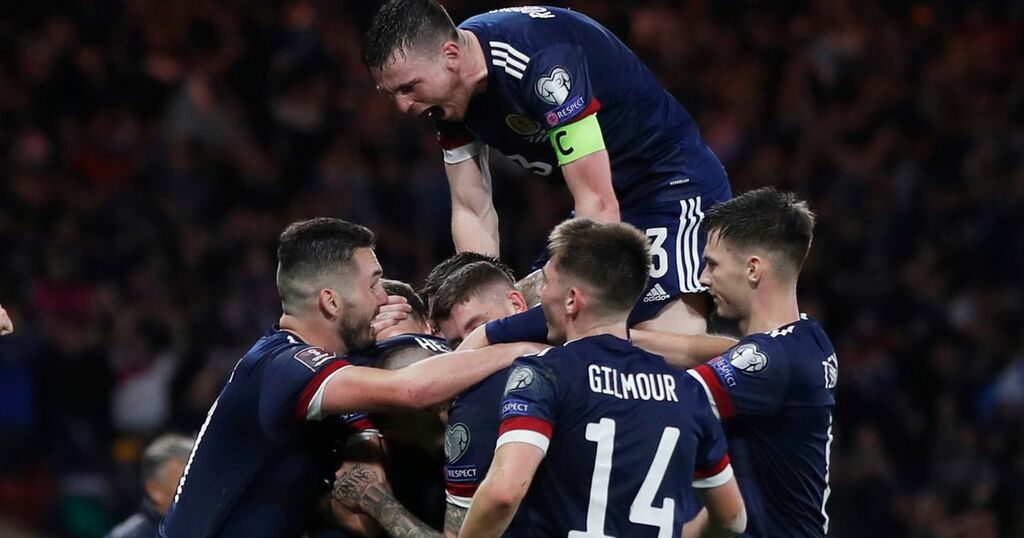 With Sir Alex Ferguson watching on from the Hampden stands, it was only fitting Scotland snatched it in Fergie Time.

Just when the road to Qatar 2022 looked like getting bumpy again, up popped Scott McTominay to break Israeli hearts and win the most dramatic of World Cup qualifiers.

The Manchester United star's late, late goal puts Steve Clarke 's side in the box-seat on a night of drama so high it was at times unbearable to witness.

And for long spells, it looked bound to end in disappointment.

The evergreen Eran Zahavi smashed Israel into an early lead, a finish that John McGinn tried his utmost to match with a magical equaliser.

Munas Dabbur's strike almost immediately afterwards lacked the same beauty but was no less important, especially when Lyndon Dykes had a penalty saved.

The big striker made amends with a VAR-assisted equaliser before McTominay stole the show at the death.

The result has Scotland clear in second and left Austria and tonight's banished opponents clinging on for dear life in the hunt for a play-off.

Israel have the most favourable final three fixtures, but victory here means a play-off could be secured before Denmark even book their flights to Glasgow.

Clarke signalled his attacking intentions by calling on Nathan Patterson over Stephen O'Donnell, while McTominay returned at the back in place of the suspended Grant Hanley.

A quite incredible Flower of Scotland crescendo was still echoing its way across the Southside when Zahavi whistled in an unstoppable free-kick that put Hampden on mute.

Patterson lost out to the excellent Manor Solomon on the right and a ball inside allowed Zahavi to buy a foul from Jack Hendry.

He then made the centre-back pay heavily with an unstoppable effort that rocked the hosts to their core.

Zahavi's supreme quality aside, it was so gallingly, typically Scotland.

A raucous build-up, fuelled by an undercurrent of positivity, wiped out in the opening moments to be replaced by tension and angst.

The next few minutes were uncomfortable as Eli Dasa got forward threateningly down the right and Scotland struggled to put a foot on the ball.

The tone of the evening had changed but Scotland kept their composure and slowly but surely worked their way into this game.

Lyndon Dykes attempted to change the narrative to no avail with a jinking run and shot that crashed against keeper Ofir Marciano.

As it so often has in a dark blue jersey, it fell to McGinn to do something about it.

Andy Robertson broke forward with purpose down the left, exchanging passes with Che Adams before squaring for the lurking McGinn at the edge of the area.

The Aston Villa man still had plenty to do but he dug out a sumptuous curling effort that sailed beyond Marciano and into the top corner.

It should have been the catalyst for better things but Israel retook the lead within seconds.

Another silly foul - this time from McTominay - gave way to yet more poor defending from the resulting free-kick and the ball eventually bundled in at the back post by Dabbur.

If you thought that was enough tragicomedy for 45 minutes, you haven't been paying attention.

A Hampden simmering with frustration was jolted back to life when Billy Gilmour's bravery won a penalty from Bibras Natcho... only for Dykes to step up and hammer it straight at Marciano.

It was to be the final meaningful action of a draining first-half but there was no let up in drama after the restart.

And it was Scotland's old pal VAR that came to the rescue, just as it did in Vienna.

Robertson's brilliant whipped cross met the studs of the onrushing Dykes but the goal was initially ruled out for a high boot.

Hampden held its head in its hands as referee Marcin Borkowski made his way to the pitchside monitor and, to the delight of 50,000, reversed his original call and pointed to the centre circle.

It was the culmination of a frenzied period of Scotland pressure, spearheaded by a man possessed in Gilmour.

The pace was frantic and, ultimately, unsustainable.

Israel, knowing a draw would do them no harm given games to come., began to retreat and dare Scotland to throw everything at it.

They gave it a fair go, with Dykes and McGinn being denied by Marciano when they really should've netted.

Six minutes of added time brought renewed hope, but just when it looked like Scotland had run out of time, McTominay was there to send Hampden into raptures.

On a night punctuated with some beautiful goals, it was the untidiest you've ever seen that won it.

McTominay is hardly famed for his predatory instincts but it was he who snuck round the back of Israel's defence to snatch a monumental victory for Scotland.

And despite some moments of self-destruction, it was no more than he and his team-mates deserved.

It's one he and this grand old stadium will never forget.

Full house is back

Not since (you guessed it) Israel visited in November 2019 has the national stadium thrown open its doors to all comers.

The return of a limited number of supporters for Euro 2020 was a hugely welcome - and poignant - moment but it simply could not compare to the din reverberating around Mount Florida this evening.

Clarke, as though almost challenging the Tartan Army, mused the deafening full house could be the difference-maker between two sides who could barely be separated over the past 18 months or so.

Fair play to the tens of thousands who stood sodden in the Glasgow downpour, they stuck with the team throughout one of the most topsy-turvy matches on this venue in recent memory.

And, in the end, they got their just rewards.

Second half shows the way

Scotland's first goal was everything that's good about this team, one which contains far more technicians and high-level footballers than we've been accustomed to down the years.

Patient build-up, sharp passing combinations, finding McGinn in dangerous areas and, of course, an excellent finish from the nation's talisman.

So why then did we spend so much of the first-half lumping the ball long?

Yes, we have a presence up top in Dykes but bypassing a midfield comprised of Gilmour and Callum McGregor just to play percentages is mind-boggling stuff.

The ball spent much more time on the deck post-interval and Scotland looked so much better for it in an outstanding second-half brimming with vibrancy and talent.

Sometimes you just have to reset and go again and this was one such moment.

The fateful foul and disjointed wall were avoidable, yes, but the quality of Israel's 34-year-old talisman simply wasn't to be denied - not even by Craig Gordon at full stretch and then some.

Zahavi and the rest of his team-mates are no strangers to this Scotland team but there was more than a hint of amnesia about how the home side allowed the ball to be so easily progressed in the direction of the veteran, as well as Solomon and Munas Dabbur in the first-half.

Israel do lack in another areas of the pitch, with the fielding of Celtic midfielder Nir Bitton at centre-back alongside two players with a total of nine caps between them attests, but their forward three is a force to be reckoned with.

Fair play to Lyndon Dykes, the big striker never shies away from the big moments.

The Queens Park Rangers forward was the hero in Austria but for a time here he took a turn as the villain, rattling a penalty agains the legs of Marciano and plunging Hampden into further despair as Israel clung to their lead.

But he quite literally soared to the rescue during a breathless Scotland blitz after the interval.

Dykes is used to being the sideman, he was once the support act for the evergreen Stephen Dobbie at Queen of the South, and Adams' arrival into the Scotland setup could have put him out of the limelight again.

But Adams has toiled at times and it's Dykes who has been there to provide when his manager needed him.

A statement which would have raised eyebrows not so long ago but one that is testament to the centre-back's rise to prominence.

Without Hanley, Scotland lacked an organiser in the back three, someone to glue the backline together and prevent the kind of lapses that proved so costly.

Hanley was shown one booking too many over in Vienna and while pre-match musings from Clarke and his staff rightly talked up the near full squad available, it was the one man they couldn't call upon that was most missed.

The 29-year-old will be back for Tuesday's clash with the Faroes but his presence on Saturday evening could have made this a whole lot less nerve-shredding.