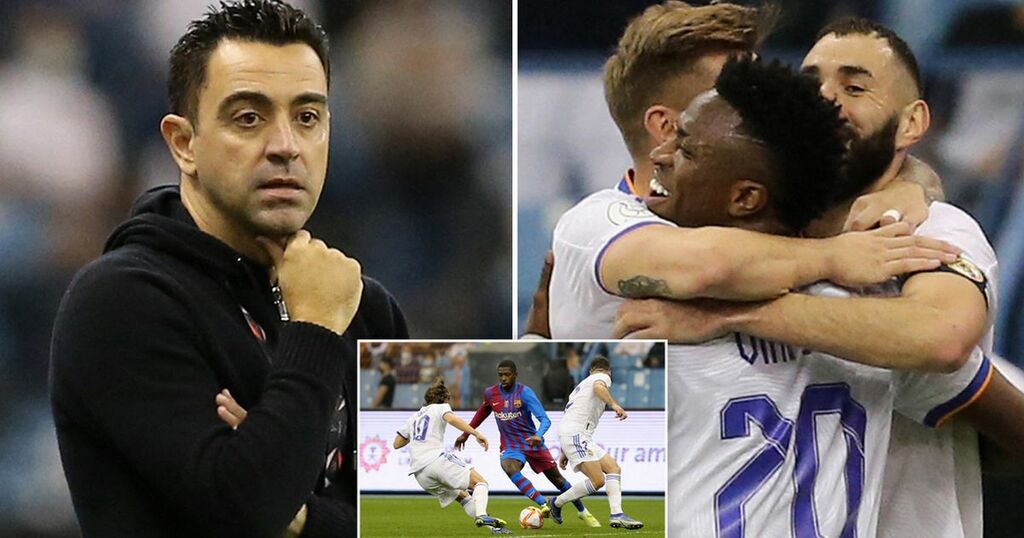 Vinicius Junior opened the scoring midway through the first half for Carlo Ancelotti’s side after being assisted by strike partner Karim Benzema, but a rather fortuitous Luuk de Jong equaliser levelled the score at the break.

Firm underdogs for this encounter, Barca had recovered after a worryingly open start but Madrid went through the gears after the hour mark and Benzema restored their lead minutes after being denied by the post.

Teenager Ansu Fati, returning from injury as a substitute, headed home a late equaliser from Jordi Alba’s cross to force extra time but Fede Valverde gave Madrid a decisive third after another counter-attack from Ancelotti’s side.

That ultimately meant defeat for Xavi in his first El Clasico as Barca boss, but there were positives to take from his side's display.

This was the first ever competitive El Clasico match to be staged outside of Spain, with the prize for the winners being a weekend final clash against the winners of Atletico Madrid’s semi-final against Real Sociedad.

Here are the five major talking points from the night’s action.

Vinicius and Benzema a class apart

There is no debate about who have been the two best players in Spain this season while there is a talk to be had that those two players are the best attacking partnership in world football.

Yes, Vinicius Junior and Karim Benzema were both on target again for Real Madrid in this game against their familiar foes – with both showing the class and decisiveness that is so often missing from this current Barca side.

Vinicius opened the scoring after being assisted by his strike partner before the Frenchman got on the scoresheet to restore the lead in the second half, moments after being denied by the post.

Between them, they have found the net 38 times this campaign for Los Blancos and look set to carry Real Madrid to domestic glory this campaign – and possibly in Europe too.

Ansu Fati is the real deal

He has been a big part of Barcelona ’s first-team squad for two-and-a-half years, but it is easy to forget that Ansu Fati is still just a 19-year-old.

Consistent injury problems have derailed his progress in recent times; he has not been fit enough to start a game since 6 November and has been included in just four starting line-ups since suffering a serious knee injury in November 2020.

Have Your Say! Can Xavi lead Barcelona back to Europe's elite? Tell us what you think here.

He returned to action in Riyadh and despite being visibly rusty, he made an instant impact when he floated into the penalty area unmarked to head home Jordi Alba’s cross.

That goal forced extra time and while Barca were ultimately edged out, their teenage sensation’s return – alongside fellow youngster Pedri - is a timely boost for the second half of the campaign.

Luuk de Jong inevitably receives his fair share of criticism after being elevated to starting status at Barcelona – a club whose demands exceed the Dutchman’s natural level.

Yet he has a habit of finding the net on the big occasion; when at Sevilla he scored multiple league goals against Barca, Real Madrid and in the Seville derby against Real Betis, while netting twice in the Europa League final win over Inter two years ago.

On Wednesday, he forced Thibaut Courtois into saves thanks to his headers before earning a stroke of good fortune with his goal – nipping in to a position where Real Madrid defender Eder Militao’s clearance rebounded into the net off the Dutch striker.

Signed by Ronald Koeman and now with three goals in three matches under Xavi, de Jong may have his limitations but right now – Barca are utilising his strengths.

While de Jong is a predictable striker who acts as a focal point for Barca’s attack but lacking mobility, Ousmane Dembele is the player who adds an element of chaos into Xavi’s side.

A nimble, fleet-footed forward who can go either side, can take on an opponent or deliver a cross, while often proving decisive in the final third.

Dembele can often infuriate Barca fans due to poor decision-making or lack of composure, but these qualities are important for the side’s attack and if he does leave this summer when his contract expires, he will be a loss.

Dani Alves played his first El Clasico in six years – he was on the brink of celebrating his 33rd birthday then, and his age is now most definitely showing.

In May, the Brazilian will celebrate his 39th birthday and by that time, Gerard Pique will be 35 and Jordi Alba 33, while Sergio Busquets’s turns 34 in July.

By many measurements, Barca are not a million miles from Europe’s current elite sides but their lack of intensity and vulnerability when losing possession are notable weak points.

Busquets was robbed of the ball by Benzema in the build-up to Madrid’s first goal, while Barca’s high line caused their ageing defenders plenty of problems throughout.

While the likes of Pedri, Nico Gonzalez, Gavi and Ansu Fati give Barca signs of an exciting future, their ageing rear-guard being phased out must surely be a priority.