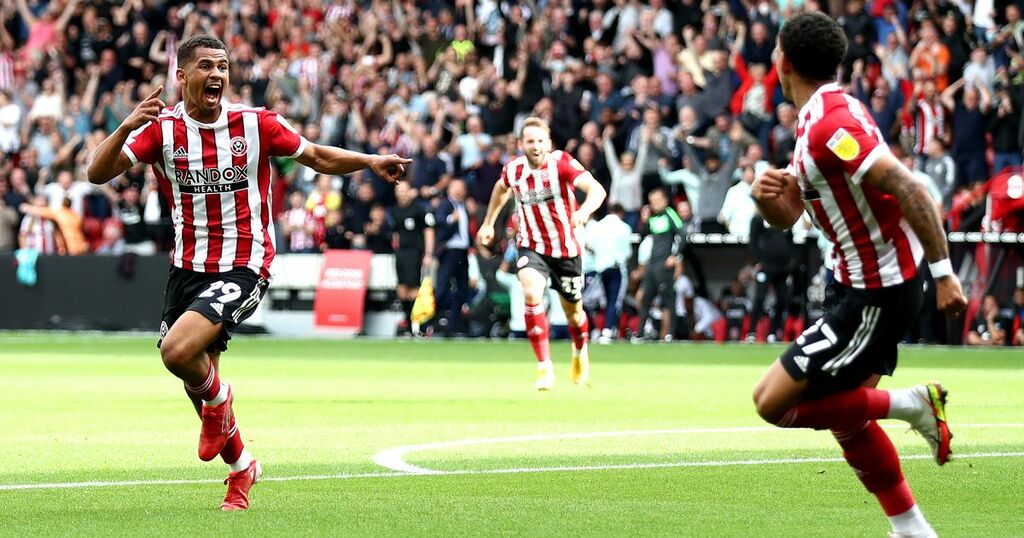 It has been another busy afternoon in the EFL.

There were 32 games across the Championship, League One and League Two today, with a glut of goals and drama aplenty.

In the second tier one of the stand-out results was the goal-laden 3-3 draw between Reading and Queens Park Rangers.

Likewise, Luton Town came from 2-0 down at Blackburn Rovers with a stoppage time effort from Luke Berry sealing a dramatic point for the Hatters.

Here, we look at five talking points from today's action.

Blades' long, long wait is over

Sheffield United supporters had waited an awful long time for this.

The last time the Blades celebrated a victory on a Saturday afternoon at 3pm was way back in March 2020. Their fans had to watch a painfully poor season from afar last season, as United surrendered their Premier League status pitifully.

And after a slow start this term, they would have perhaps feared the worst when Peterborough's Jack Marriott (a one-time Sheffield Wednesday loanee) cancelled out Iliman Ndiaye's opener this afternoon.

But United dug in and strikes from John Fleck, Ben Osborn and Gibbs-White hauled the hosts back in front.

For good measure, Ndiaye and Osborn both notched braces late on to end a long, long wait for Unitedites as they romped to a whopping 6-2 win.

Fulham travelled to Blackpool top of the table and defending a proud unbeaten record.

But Marco Silva's side became a cropper in a result that typifies the nature of the Championship.

There were two divisions separating these two sides last term but Blackpool made a mockery of that, with Josh Bowler's second half strike all that separated the two teams. Ironically, Bowler is a former Cottagers' youngster.

The hosts were well worth their win too, with a committed performance ensuring they held off the high-profile visitors.

It ensured a first win for the Tangerines in the second tier since way back in January 2015.

Spare a thought for Paul Cook.

The Tractor Boys were installed as favourites for promotion out of League One this season, after an eye-catching summer in the transfer market.

But their wait for a first league win of the season goes on, after they were tonked 5-2 at home to newly-promoted Bolton.

It started well for Cook's side when Macauley Bonne opened the scoring. But Bolton hit back to lead 2-1, before scores were levelled once more through an own goal.

But Bolton then struck three times in 13 minutes either side of the interval and it was all uphill from there.

Doncaster's drought is over

Richie Wellens hasn't had much to smile about since entering the hotseat at Doncaster Rovers.

They entered today's tricky-looking trip to Wigan Athletic on a miserable run of form.

They were in the midst of their worst goal drought since 1947 having failed to notch in seven straight games in all competitions.

So there was plenty of relief expressed by Wellens and the travelling Rovers' fans when Tommy Rowe fired home midway through the first half at the DW Stadium.

Sadly for Rovers, they conceded within two minutes when Will Keane restored parity. And that same man struck what proved to be the winner just after the break to leave Wellens' men winless and bottom of the standings.

Oldham Athletic fell to a morale-sapping 4-0 defeat at Leyton Orient this afternoon.

That heavy loss combined with Sutton United's first-ever EFL win over Stevenage means the Latics sink to the bottom of League Two.

There has been plenty of dismay from supporters aimed at owner Abdallah Lemsagam. Protests following recent home games led the club's ownership to suspend ticket sales for upcoming matches in a move that only go to further alienate an already-fatigued fanbase.

Today's game even saw Orient fans joining in with Oldham chants calling for the owner to go!

Keith Curle has a huge job on his hands if he is to ensure Athletic don't become the first ex-Premier League club to sink into non-league.