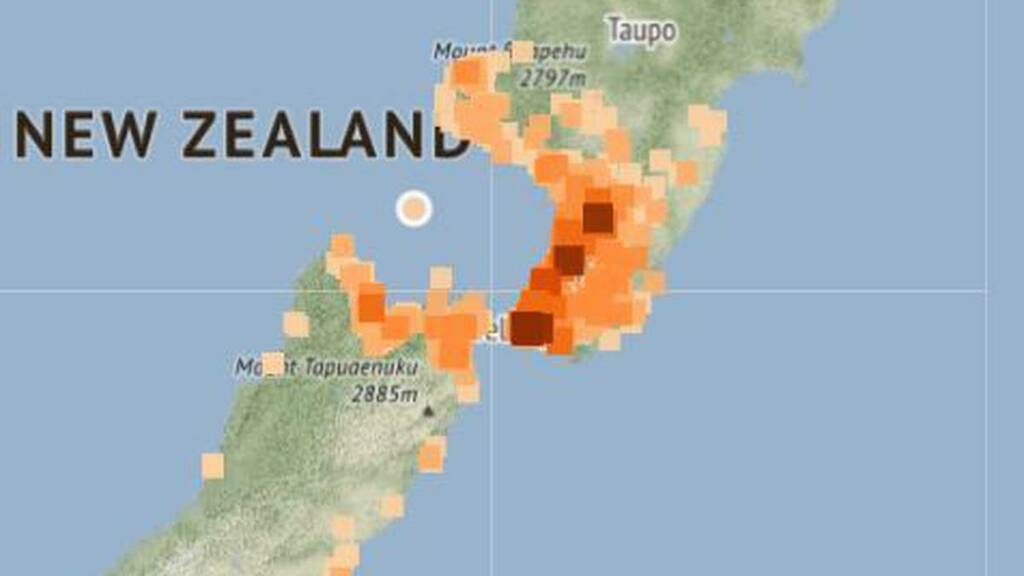 A 5.3 magnitude earthquake has struck in between the North and South islands, with thousands reporting to have felt the shaking.

The quake hit 80km north of French Pass at a depth of 149km, shortly before 3pm on Tuesday.

More than 17,000 people reported feeling the shaking - with some as far away as Mt Ruapehu.

Fire and Emergency said it had not received any reports of damage or call-outs following the earthquake.

A spokesperson said their Wellington building, which is on base isolators like Te Papa, rolled with the shake.

A police spokesperson said they had not received any calls in relation to the quake.

GeoNet said the earthquake was felt across the lower North Island and upper South Island, with the organisation receiving more than 17,000 felt reports.

Because the earthquake was deep, occurring 149 kilometres below the Wanganui Basin, shaking was felt over a wide area around the epicentre and was particularly strong from Wellington to the Horowhenua.

Geonet said this was due to seismic waves travelling up the subducting slab.

It said the quake occurred in a seismically active part of the subducting slab, and is standard fare for Aotearoa New Zealand tectonics.

One feature that marked today's quake was the fact many people with Android phones in the affected regions were given up to 10-15 seconds warning that a shake was about to hit.

Software solutions architect Kai Koenig explained on Twitter: "If you are surprised your Android phone (with Google services on it) warned you of the recent #eqnz: yes, it's a reasonably new feature available in NZ.

"The process of getting new Android features on devices has historically been frustrating and slow.

"There are many reasons, but Google works around that using a library called Google Play Services. It contains functionality and services and are kind of system-level, but not quite. But in the grand scheme of things closer to the hardware than your average app.

"A while ago, the earthquake alerts were added to Google Play Services and even more recently they were enabled for NZ. Depending on your location it uses a platform called ShakeAlert or simply the accelerometer of devices.

"Imagine it being a big network of devices and all of a sudden they all start shaking a little bit. If you look at the patterns of vibrations, it's possible to get a reasonably good idea of where the earthquake roughly is and when other users will feel it via the s-waves.

"And that's why a lot of Android users in NZ today for the first time would have received a Google 'Earthquake shaking is on the way' warning.

"Most importantly is: you need to make sure it's enabled. It should be by default when you get the feature, but it might not be."

Wellingtonians have taken to social media to describe the quake.

Wellington Phoenix general manager David Dome tweeted Wellington was "shaking and reeling", while Sky Stadium CEO Shane Harmon joked "with everything else that's going on EQNZ decides it wants a piece of the action".

Others have noted the weather, mistaking the quake for Wellington's notorious wind, or the unseasonable hail that's fallen in the Hutt Valley today.

Another resident, who had just had their second Covid-19 vaccination, said they were glad to be in the observation at the time of the earthquake.

The Wellington Region Emergency Management Office told the Herald there was nothing to report, but reminded people of the right action to take during an earthquake which is to "Drop, Cover, Hold".