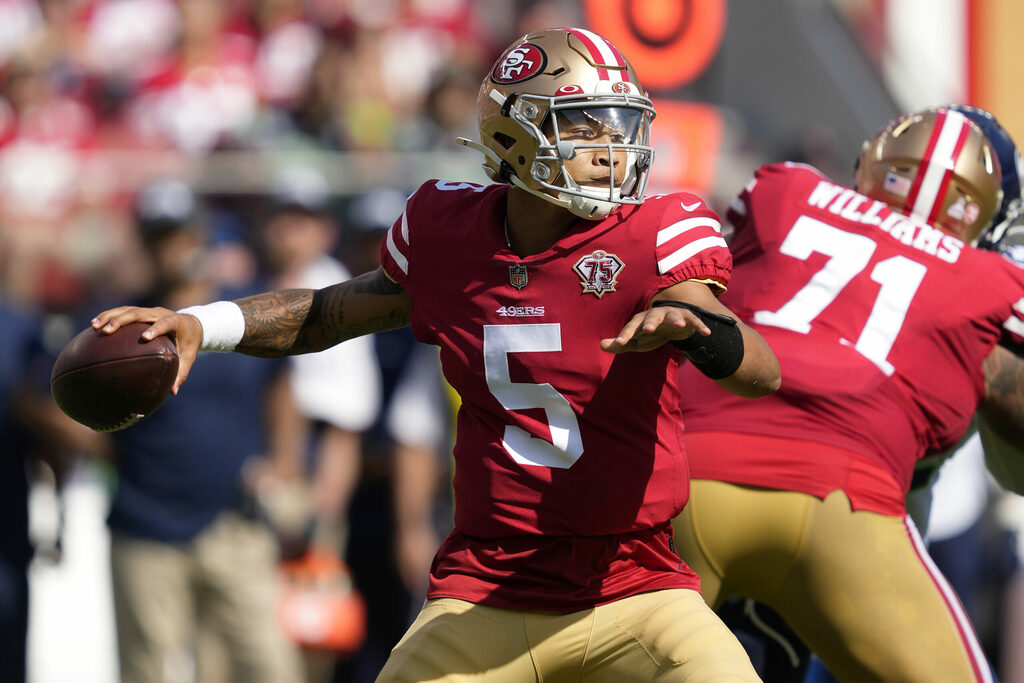 The 49ers don’t need Trey Lance to be an MVP candidate right away. They do need to see him improve during his rookie season though with the expectation he’ll be ready to carry the offense in 2022. While he was thrust into action unexpectedly in Week 4 and struggled in some areas, offensive coordinator Mike McDaniel said there was a vital aspect to Lance’s development against the Seahawks.

McDaniel on Thursday told reporters in a press conference that Lance is still dealing with rookie growing pains, but the team hasn’t lost confidence in the No. 3 overall pick, especially now that he has a real two-minute drill under his belt.

“I feel like he’s in the boat with a lot of rookies, in terms of you’re looking at him and you’re like, ‘this isn’t the end result,’” McDaniel said. “I think every day he shows us that he’s wise beyond his years, much more mature than I was at his age. I can tell you that much. Very, very smart. And as far as expectations, we expected him to be a rookie who threw 300 and some odd passes in college. But you know what, in an NFL football game this season, he’s had more two-minute reps than he’s had his entire college career. I’m not sure if you guys know, but he’s really good at winning football games in high school and college, so he was never behind.”

Lance was undefeated in college at North Dakota State and dominated the FCS level while going 17-0 as a starter.

He entered to start the second half against Seattle in a tie game. The 49ers quickly fell behind 21-7, forcing head coach Kyle Shanahan to throw more than he might’ve liked with a rookie quarterback who threw only 318 passes in college.

San Francisco trailed 28-14 when Lance and the 49ers took over at their own 20 with 4:30 left. While an ideal scenario would’ve seen a quick offensive score, Lance navigated a 13-play, 90-yard drive that took 3:10 off the clock. It wasn’t a perfect two-minute scenario, but a hurry-up style drive with some urgency that didn’t afford Lance the luxury of huddling and taking his time was something he hadn’t done a lot in game situations.

Those are the exact things the 49ers need to see him do this year and get better at when he does play. McDaniel said the team knew Lance was going to be a project, but early returns on his growth are positive for the offensive coordinator.

“Just knowing that on the front end, you know there’s going to be a lot of things to grow on,” McDaniel said. “And he knows that as well, which is why when bad things happen he doesn’t blink. He had an incompletion on a four-yard throw and then throws a 76-yard touchdown pass. You know that there’s going to be some hiccups along the road. You accept that. But you just try to do the best you can and continue to improve. That’s the biggest thing, you just don’t want to regress. You want to find a thing, improve on it, fix it, go to the next thing. And he’s hungry enough to keep doing that, which is why we’re pumped to have him.”