333 psychiatrists to reach out to NEET-takers for counselling 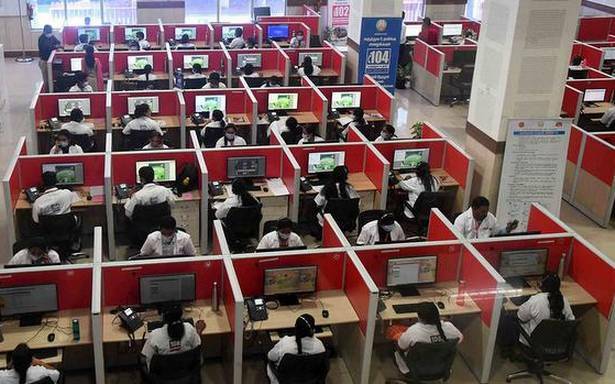 The Health Department will reach out to nearly 1.12 lakh students who appeared for the National Eligibility-cum-Entrance Test (NEET) for counselling through the State health helpline 104 for those residing in Chennai and the district-level war rooms for others.

A camp to reach out to the students and talk to them for two to three minutes after getting their approval was launched on Wednesday.

“We have got the list of students and their contact numbers from the National Testing Agency. We will send the district-wise lists, and 333 psychiatrists working in government medical college hospitals and district headquarters hospitals will reach out to them by phone through the district-level war rooms,” Health Minister Ma. Subramanian said.

He said students who appeared for NEET more than once would be prioritised.

With regard to students from Chennai, 40 counsellors would reach out to them through the health helpline 104. The Minister said this would serve as an opportunity to get to know the state of mind of the students, whether they were stressed or happy after appearing for the exam and how they viewed their performance. The counselling would help dispel the fear of exams among the students, the Minister said.

A 12-point guideline to carry forward the counselling was created and shared with psychiatrists and counsellors, he said. The aim is to cover the 1.12 lakh students in 10 to 15 days, he added. Psychiatrists, psychologists and counsellors of the District Mental Health Programme will be involved.

The Minister pointed out that the 108 ambulance network was entering its 13th year of service. It was launched by former Chief Minister M. Karunanidhi on September 15, 2008. Currently, 1,303 ambulances are being operated in the State.

Noting that the role of the State’s round-the-clock health helpline 104 was pivotal during the COVID-19 crisis, he said, “From today, the 104 helpline will be toll-free.” People were earlier charged for using the service.