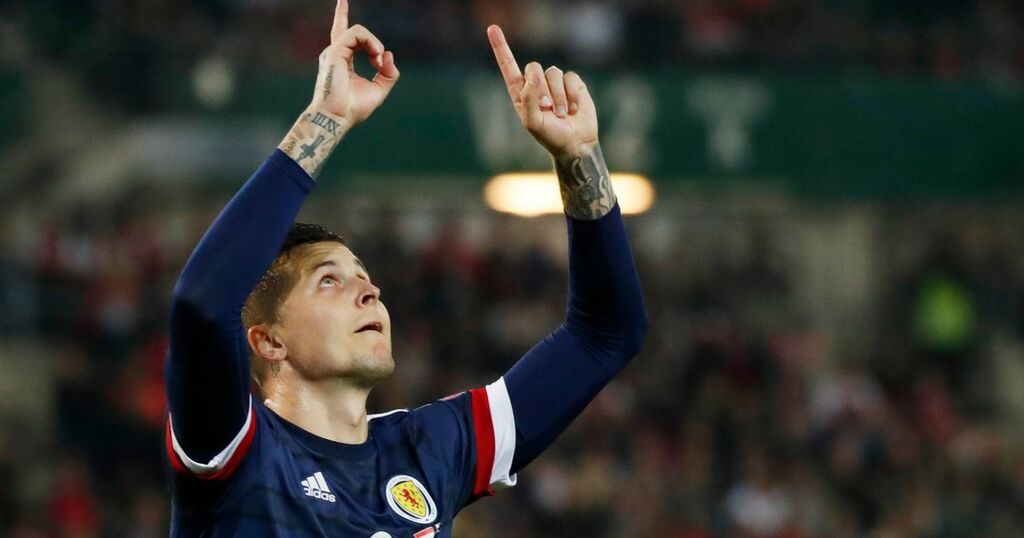 Lyndon Dykes was the goal hero for the second game running as the striker fired Scotland up to second in qualifying Group F.

The QPR man netted the only goal in Vienna to put a dagger through Austria’s World Cup hopes and the visitors into the playoff spot.

The QPR frontman netted a huge first half penalty after a VAR spot kick award just days after his goal was the different against Moldova at Hampden.

It made for a good night Vienna for Steve Clarke as he celebrated six points from a possible nine from this month’s triple header as they prepare for the visit of Israel - who lost to runaway group leaders Denmark - to Glasgow.

Scotland now sit four points ahead of Austria and a win over Israel would give them the same cushion over them and take a massive step towards at least securing a play off place for Qatar 2022.

But Grant Hanley won’t be available for that match against the Israelis after picking up a booking that rules him out, however, it was a small price to pay as Scotland continued a 43-year unbeaten run in Vienna.

The hosts were only beaten in extra time in the last-16 by eventual Euro 2020 winners Italy so that underlined their quality.

But they were rocked ahead of the visit of Clarke’s men by a shock 5-2 thumping by Israel that left them right up against it in Group F.

Clarke made a trio of changes from the Moldova win with Nathan Patterson out and Stephen O’Donnell replaced the Rangers man at right back while Che Adams was preferred to Kevin Nisbet up front and Callum McGregor came in for Ryan Christie.

The Scotland boss wanted to start on the front foot but Austria were brighter early on with Kieran Tierney doing well to head away a brilliant David Alaba cross and Marko Arnautovic’s shot deflected just wide.

But the visitors had their moments. Che Adams did well to pinch possession in the middle of the park to spark a counter attack but the move broke down inside the box after John McGinn had matched the run.

And then inside 10 minutes the Scots carved out a brilliant chance with McGinn’s cross met by leaping Dykes but his downward header was palmed away by Daniel Bachmann, who played under Clarke at Kilmarnock.

It was a lively opening to the game but it exploded into life on the half hour mark as Scotland grabbed the lead in controversial fashion.

Che Adams was bundled over inside the box after he was surrounded by Austrian defenders and Bulgarian referee Georgi Kabakov.

TV replays showed that Enintracht Frankfurt man Martin Hinteregger had both arms on the Southampton man’s shoulders and after reviewing the incident on the monitor, Kabakov pointed to the spot.

It was a huge moment for Scotland and Dykes stepped up to smash the penalty which squirmed under Bachmann - another bit of fortune that Clarke has maybe been missing.

There was almost another huge slice of good fortune in the second half when Bachmann came racing out to clear a throughball but kicked the ground and lost his balance.

Adams had been chasing it but the former Killie keeper managed to recover before the Scotland striker had the chance to fully capitalise.

It was a rare attack from the visitors at that stage having been forced to sit deep as they defended their lead.

But they had moments to kill the game off and Adams fed O’Donnell who made a lung-busting run but his effort was palmed away by Bachmann.

John McGinn had an opportunity moments later but the Aston Villa man sent his effort over the crossbar.

In the main, Scotland were having to hang on for the three points and they had the last line of their defence to thank when Craig Gordon pulled off a stunning stop to deny Christoph Baumgartner from a point blank header from a corner.

This was the kind of victory Steve Clarke needed with growing grumblings over his overall record and performances.

And for Scotland as a nation it was biggest meaningful competitive win on the road against a top ranking nation since that famous night in Paris in 2007.

Austria might not be quite as mighty as that France side but they are more than a decent outfit and particularly formidable at home where they have lost just four times in over 20 games.

They also only lost to eventual Euro 2020 winners Italy in extra time and Scotland have now delivered a hammer blow to their World Cup hopes, although they are likely to earn a play-off place through the Nations League.

More than a Hint of a red card

There was a bit of surprise when referee Georgi Kabakov awarded Scotland their first half penalty but TV replays showed it was the right decision.

Martin Hinteregger clearly had both hands on Che Adams as he wrestled the Southampton man to the ground.

But where the Bulgarian whistler was definitely wrong was in not then giving Hinteregger his marching orders.

The Eintracht Frankfurt man had been booked earlier for scything down Callum McGregor and a second yellow card should have been issued.

Stephen O’Donnell has had no shortage of critics during his time in a Scotland short and on occasions it has been over the top.

The Motherwell man was back in the line up with Nathan Patterson unavailable after he had impressed against Moldova.

O’Donnell got himself into some great positions and he showed some great energy to get down the right flank.

But on a couple of occasions in the first half his crossing was really poor as he scuffed one effort and that was followed by another wasted delivery and that final ball has to be better.

In his defence, it was O’Donnell’s first game in a month and missed the trip to Denmark due to Covid restrictions having previously tested positive and he was replaced by Paul McGinn in the latter stages.