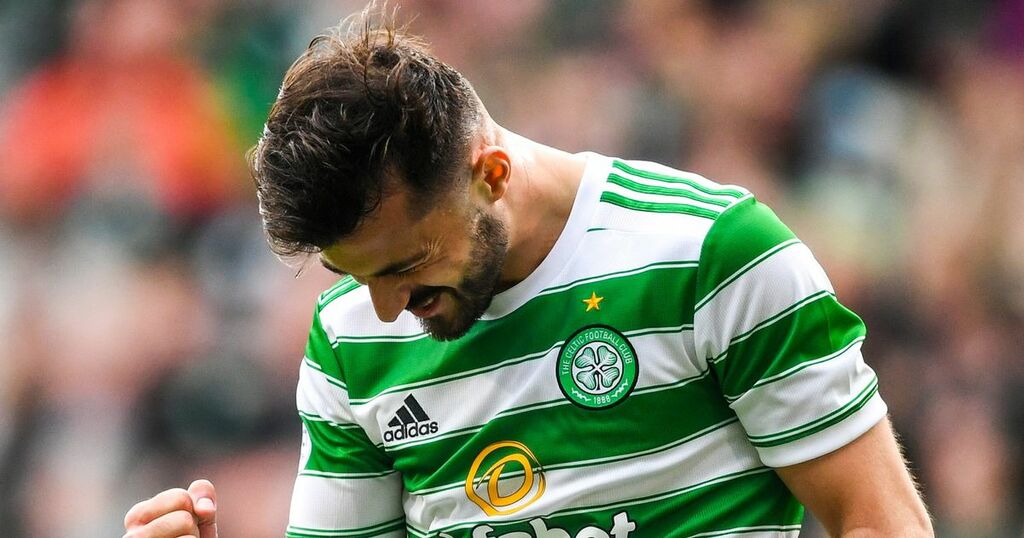 Cameron Carter-Vickers got his Celtic career off to a flier with the vital opener as the Hoops eventually saw off resilient Ross County.

There was also a lively debut for borrowed Benfica winger Jota but Celts had to dig it out as solid Ross County hung tough as they attempted a repeat of last season’s League Cup win at Parkhead.

Celtic were without injured attackers Kyogo and James Forrest, while new Bhoy Giorgios Giakoumakis is still building fitness, while Greg Taylor was forced off after a flare up of his shoulder problem suffered against AZ Alkmaar last month.

Postegoclou was relieved to return from the break with a win and with his new men finding their feet.

Jota was quick out the traps, causing problems for County from the first whistle with his touch and pace. The Portuguese winger brilliantly pulled the ball down before driving an effort start at Ross Laidlaw early on and went close a few more times when he got in behind.

On the other wing Liel Abada was right in the thick of it – and could have bagged a couple in the opening half.

The attacker hit the woodwork twice, firstly after his volley was nudged on to the bar by Laidlaw and then another drive deflected in the same direction off Ben Paton.

There was another chance at the back post when he was picked out by Tom Rogic, but he found the side netting.

In between times David Turnbull wasn’t far off from long range and a rusty looking Albian Ajeti scuffed straight at Laidlaw when he should have burst the net.

County were solid and Celtic’s frustration was only increased when Taylor was forced off just minutes in to the second half and Postecoglou’s men were struggling to find a way through.

There was a hint of tension after Jota slashed one wide but but Carter-Vickers eased the worries when he strode forward and let fly from 30 yards, with his drive taking a wild deflection off Jack Baldwin and spinning over Laidlaw and in to the net.

The frontman got another after he stooped to nod in the rebound after sub James McCarthy’s back post header cannoned off the bar.

A chief executive is not going to score a side 20 goals a season – and if he did he’d be able to negotiate himself a pretty tasty contract.

But Celtic parting ways with Dom McKay on Friday night has caused some unexpected turbulence at a time when it seemed the club had stabilised.

The Parkhead statement didn’t give much away about the decision but it’s clear things were not quite working smoothly behind the scenes.

It was a busy summer for Celts with 12 players coming in and even more heading out in the other direction, but how much McKay was involved in the wheeling and dealing is up for debate.

Boss Ange Postecoglou admitted he had a decent relationship with the outgoing CEO but there was a hint acting chief Michael Nicolson was pretty hands-on anyway.

The manager didn’t seem to fussed but it remains to be seen if the boardroom shake up will help or hinder the rebuilding mission on the pitch.

Postecoglou hasn’t been shy about lobbing new recruits in at the deep end and a couple of the deadline day arrivals were handed debuts against County.

At the back Cameron Carter-Vickers got his goal, but that’s not what he’s been signed to do. He was a big presence and he seemed comfortable on the ball. There were some signs of rust at times after an injury hit start to the season at Spurs but there was enough positives to suggest he’ll give Celts some muscle in defence.

Giorgios Giakoumakis might need a few weeks but Albian Ajeti could be like a new signing. The frontman struggled for much of the afternoon and looked short of confidence.

But his late double could have done him and his gaffer the world of good with Kyogo facing a few weeks on the sidelines.

Ross County stunned Celtic in the League Cup in Glasgow last year behind closed doors and they did it again in Dingwall in the Premiership to all but seal Neil Lennon’s fate.

They gave the Hoops grief again and Malky Mackay’s set up managed to frustrate Celts for long spells while looking dangerous on the break.

The Staggies have yet to claim a win in the league this season but there have been positives signs. They were solid and well organised at Parkhead and it took a wicked deflection to leave them up against it.

It’s an old cliche, but it’s not games against the likes of Celtic that will define their season. If Mackay’s men can add a bit of a cutting edge in the final third then they might be able to avoid a campaign scrapping it out towards the bottom of the table.